‘The questions are the answers’

THOUGH ONE of the most celebrated and influential poets of their generation, Andrea Gibson’s starkly observant and deeply humanistic writing has flown beneath the radar of popular culture long enough now to have accrued a mythology among poets, songwriters and storytellers worldwide.

Emerging from the late ‘90s spoken word milieu, Gibson is an award-winning spoken word artist and activist whose topics meditate widely on the conundrum of life, love, loss and renewal while seating gender norms, social reform, identity and the struggles of the LGBQT+ community down front and center.

For over two decades, Gibson has been providing the world with exacting and vulnerable poetry that does not shirk from raw truth nor deep compassion. 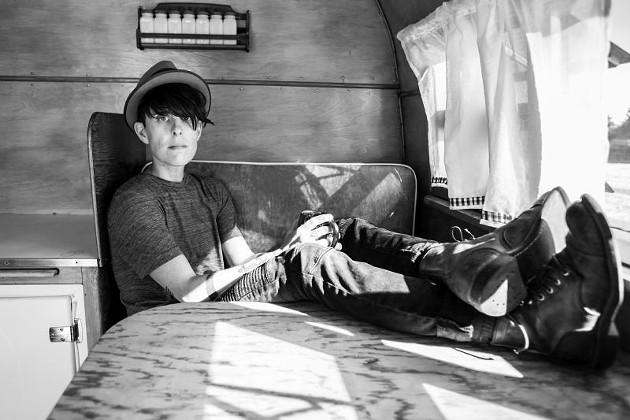 Their newest and fourth collection of poems “Lord of the Butterflies” and their seventh spoken word album “Hey Galaxy” are a righteous continuance of the established oeuvre of truth, hope, and redemption.

Joining Gibson on the bill, a first of two poets headlining a rock club on a Saturday night in Savannah, is poet Buddy Wakefield, also widely known for keen and trenchant commentary.

Gibson graciously came through with an excellent Q&A ahead of the show.

What does poetry allow us that the side of a cereal box cannot?

The sweetness inside is actually nutritious.

What did poetry discover for you?

That rightness is boring. That the questions are the answers. That we can only go where we can first imagine going. That even when the truth isn’t hopeful, the telling of it is.

Was there ever a particular no-looking-back moment for you as a poet?

My first National Poetry Slam. I watched a poet named Shane Koyczan read a poem titled “Beethoven” and it was, at the time, the most moving thing I had ever witnessed. Nothing was the same for me after that. I wanted to break all over the place for that kind of beauty, and never stop.

Was there an essential thing that confirmed your voice, brought you from then to now?

Where do we find the necessity of identity, what yearns us toward us?

So when I write these days I think “Would dead-me say this?” And if dead-me wouldn’t say it I throw the poem away and start again.

In regards to queerness though---specifically my gender-queerness-- it does make me smile to imagine that’s the part of me that is most inline with the eternal me. ALL that said,  I’m whole-heartedly in touch with how much my “identity” has been the source of many of my most impactful connections over the years. It has shaped my life in almost every way, and I won’t and don’t want to escape the blunt fact of this world while I’m here.

In poetry, the personal and political may come served on the same plate. Are they from the same kitchen?

I generally wish the word “political” would cease to exist. We are never talking about politics when we talk about politics and I notice the word itself making our hearts lazy.

It is always the personal we are talking about. How our lives connect to the lives of others and how all of our lives are equally gigantic. The politics of politics suggest it’s OK to debate the value of lives, but that has never been OK. That has never been sane part of our culture.

The act of simply creating is activism in a world that is addicted to destruction. We’ve become the nuts and bolts of the war machine in more ways than we can pinpoint in any given moment, but to venture into a creative space is to break free from that at least temporarily.

Spoken word poetry takes an additional step in that it is very often a rally cry for immediate direct action. It doesn’t tip-toe around what desperately needs changing, and I’ve personally been compelled towards real-life actions many times because of poems I’ve heard or read.

In that sense, where does Lord of the Butterflies pick up where previous work leaves off?

My subject matter hasn’t changed much over the years. What’s changed is my lens, and in what direction I’m looking.  In my early books I did a lot of pointing outwards. These days it feels more constructive to point inwards.

You released three spoken word albums between 2003 and 2006 before releasing your first printed collection of poems, Pole Dancing to Gospel Hymns in 2008. Since then, have you seen progress in the print world with getting more stage poets to the page?

Some of the best "page poets" in the world right now are spoken word artists. That's been the case for a long time, but I do notice a positive shift in that being acknowledged on a greater scale.

I don’t think it’s difficult for great spoken word artists to find a way to have their work live beautifully on the page. What I think is more difficult is teaching a “page poet” to read a poem out loud in a way that is emotionally resonant.

Is there a name for the poem that you knew would lead to the rest of your life?

I SING THE BODY ELECTRIC, ESPECIALLY WHEN MY POWER IS OUT.

Buddy Wakefield, thank goodness, was torn from the Bible the day it was burned for that verse about dancing to tambourines.