Third time's a prom at El-Rocko

IF YOU'RE NOT familiar with All Night Drug Prowling Wolves, you can definitely start at the band name itself. Founded in Atlanta over a decade ago, the band isn’t particularly active these days but finds time about two or three times per year to get together and play some rock and roll.

True to their word, the band is getting back together once again and coming to Savannah to help El-Rocko Lounge celebrate three years in business.

Ahead of the show on Sat., April 27, which also features the great Black Tusk as well as Square One, we spoke to the Wolves’ Thomas Cheshire about the band, their history, and future.

Thanks for chatting with me today, man!

Cheshire: I’m so glad it worked out. Not living in Atlanta for almost 10 years now, I truly love the guys in the Wolves but we’re not able to do much. We’ve got ourselves in a happy place where if we can get together a few times a year and celebrate what we did, we’re very happy with that.

So you’re all kind of scattered now and then get together when you can?

Cheshire: Yeah, so we basically do probably two or three shows a year now. This year, it being El Rocko’s third anniversary - Wes is an old friend, and I’ve known him for over 20 years now. So whenever I can do something for him, I try to.

I moved back to New York in 2011, and we were all going in different directions. Everyone was married and having kids, and I didn’t have any kids and my marriage was ending. So what I needed most was music. Those guys couldn’t do it as much, so it was as simple as, “I’m gonna get out of town and work on my own stuff.”

Now that you only get together a few times a year, do you appreciate this band more?

Cheshire: Oh yeah, completely. It’s hands down the easiest band I’ve ever been in. They’re wonderful humans, great men, and everyone knows that their time is insanely valuable. Everyone’s busy working, raising kids, and they’re slammed. And some guys are still pretty active in music, and some aren’t able to play as much. So when the five of us get in a room, it’s really enjoyable. 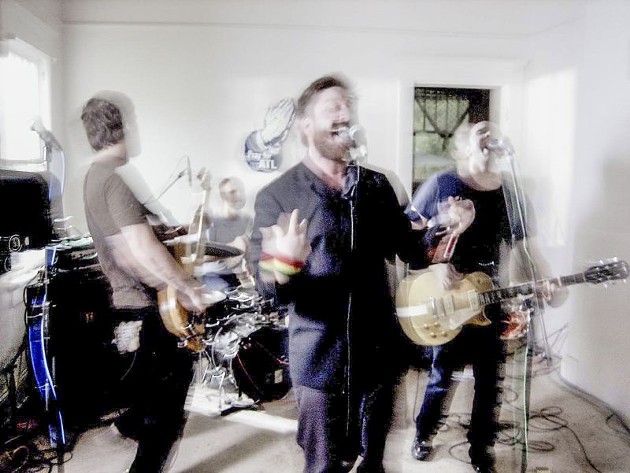 All Night Drug Prowling Wolves is the headliner.

I’m sure you’ve been asked this a billion times, but how did you guys find this band name?

Cheshire: Marlow Sanchez, our guitar player, is the main riff writer in the band who I’ve been playing with going on 20 years. We hadn’t played together in a minute, and I think he came up with the name first. He just loved the name, and he was like, “Let’s do something under this moniker.”

It’s the last line in the Clash song “(White Man) In Hammersmith Palais,” which is a song we both love. But I probably didn’t even realize it was the actual line until he pointed it out to me. It sounded amazing, it was poetic—Marlow didn’t have to work too hard to sell me on it.

What were some of the early influences that set the tone for this band?

Cheshire: We were punk rock kids who grew up on that stuff. We were influenced by the DIY mentality and way of life. We drank and we did drugs, but other than that we tried to be good humans and make good decisions. For us, being punk was not about being a bad person. It was about being the opposite.

I grew up in New York and I was a New Wave kid first, but then I got into punk rock. A lot of the bands that came out of England in the 70s influenced us - The Jam, Elvis Costello, Stiff Little Fingers, all those bands influenced us with the music and the art and the lyrics.

Do you ever do a reunion show now and think, “Man, we really need to make another record”?

Cheshire: We do! Every time we get together. Marlow and I are always writing and sending each other ideas. I’m not a fan of saying it’ll never happen. We’re always working on ideas, so you never know. But there’s also a good chance that we may continue doing these two or three shows and say, “This was a special thing and we bottled this thing that we’re proud of—let’s continue to celebrate it.”