THE Georgia Department of Transportation’s $1.85 million resurfacing project on US Highway 80 is intended to raise the roadway between Savannah and Tybee Island and make it less susceptible to flooding, which is more frequent on the causeway these days due to rising sea levels.

Local people who ride bikes may have noticed another outcome. The road to Tybee Island now has bikeable shoulders.

Previously, the shoulders were covered with rumble strips, encroached upon by vegetation, and strewn with debris. This trio of problems ensured that only the bravest souls — or people with no other options — pedaled between Savannah and Tybee Island. 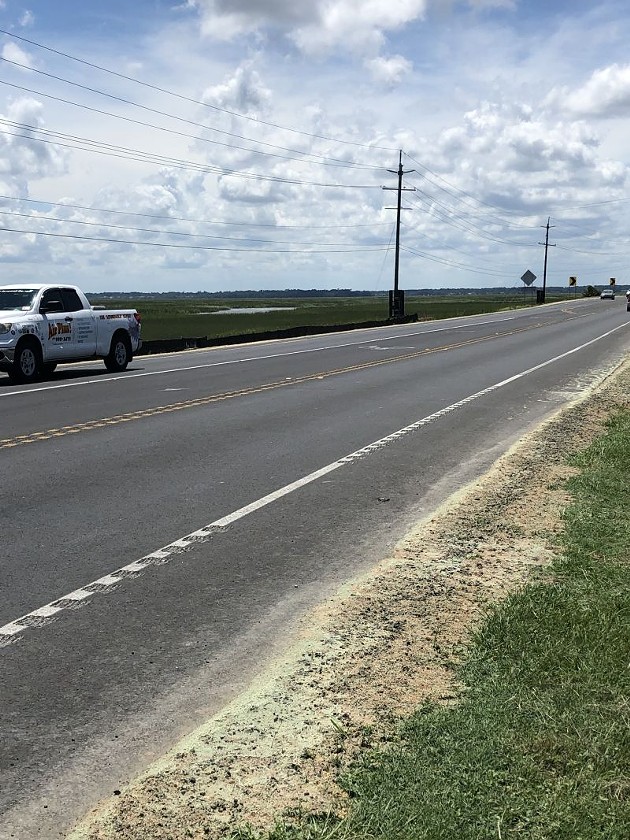 The Federal Highway Administration advises rumble stripes can be used to accommodate “existing and projected use in a specific corridor” by people on bikes. “Projected” is the key word here, for until the narrow Bull River and Lazaretto Creek bridges are replaced, riding to Tybee will remain a harrowing experience.

And while the new shoulders and rumble stripes are a huge improvement, only the most confident cyclists will feel comfortable riding alongside cars and trucks moving at highway speeds.

“This project is a great precursor to the improvements that will be made upon replacement of the bridges and finishing of the roadway,” she said. “Once the US 80 project is completed, people will be able to get onto Tybee Island in a way they were never able to before. I’m thankful that GDOT understands the importance of providing safe, reliable places for people of all ages and abilities to bike, walk and roll, and look forward to continuing working with them on projects that will improve transportation options around the region.”

Jim Sayer, executive director of the Adventure Cycling Association, has seen the positive impacts of making islands like Tybee reachable via bicycle. Founded in 1973 and based in Missoula, Montana, ACA is the leading bicycle travel organization in North America and has more than 50,000 members.

“In my experience, barrier islands are natural tourism destinations and, treated right, they are perfect bike travel destinations — almost always flat and beautiful,” he said.

“When you build the right road or trail access facility, you can count on seeing a boost in daily bike tourism and even multi-day, as people will change their itinerary to find desirable pedaling places.”

And he’s not just speaking from an academic perspective. He’s lived it.

“I just rode the Atlantic Coast from Maine to Key West and visited countless barrier islands,” Sayer said. “Most were hard for an inexperienced cyclist to access due to poor road design. But the ones that were easier? I’ll remember them always.”

Replacement of the bridges with new designs that include protected lanes for biking and walking, along with even wider shoulders, and improvements to the McQueen’s Island trail would certainly make a bike ride to Tybee pleasantly memorable.

Unfortunately, funding for the project remains about $100 million short.

In the meantime, however, Brown said the recent improvements on the causeway illustrate the potential of resurfacing projects to deliver bicycling safety improvements at little to no cost.

“This project is a perfect example of changes that can be made simply by narrowing the width of a rumble strip and moving lines of paint,” Brown said.

A prime candidate for similar treatment is 52nd Street between the Truman Parkway and Skidaway Road. Sections of the street have undulations not unlike hardened lava flows, indicating a resurfacing is needed sooner rather than later.

The street is so wide, bike lanes could be painted in with room to spare, providing a safe route to Phase 2B of the planned Truman Linear Park Trail. Narrowing the main travel lanes would also reduce motor vehicle speeds, especially important since Myers Middle School is located in 52nd Street.