A few words from the original rockabilly rebel 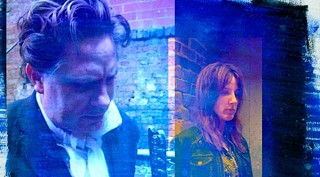 Still, the band never crossed into any kind of mainstream acceptance. Perhaps the hyper–kinetic, low–fi garage music was just a bit too close to the actual garage – after all, the only other member of FDJ was drummer Crow Smith, who pounded out intense tribal rhythms behind Romweber as he flailed at his instrument, screaming and bellowing baritone like an amphetamine-fueled ‘50s wildman into the microphone.

Years later, along came the White Stripes, who put a new and utterly compelling spin on blues, rock and even country music using the very same instrumentation. And we all know how that turned out.

Romweber has been going it alone for the better part of a decade; in the Chapel Hill area of North Carolina, where he lives, he performs solo and as part of a 10–piece band (the New Romans). He even made an album of nothing but classical piano (Piano).

The two play a Savannah Stopover–sponsored show Thursday, June 23 in the courtyard of Cha Bella Restaurant, after an opening set by the Jon Lindsay Band.

In the past couple of years, they’ve come out with a Jack White–produced EP, and a live set, recorded (with White on guitar and vocals) at the Stripeman’s Third Man Records in Nashville.

Ruins of Berlin, their 2009 full–length, is a tremendously powerful showcase of everything Dex Romweber does better than so many, including blistering instrumentals, glorious, retro–stirred singalongs and southern gothic, heartbreak–in–the–mainline torch tunes.

Cat Power, Neko Case and Exene Cervenka – all label–mates of Dex’s on the Chicago–based Bloodshot Records – turn in haunting duets.

The siblings have a new album out on Bloodshot next month.

Here are a few choice cuts from our recent conversation with Dex:

“I like other instruments! It’s just a matter of finance, really. The Flat Duo Jets started completely by accident. Me and Crow were the only two people around to play. We even had a bass player for a little while. At the moment, it’s a matter of finance. It’s not anything particular – it’s ‘travel light, and hopefully try to make a living.’”

“Crow and I were big fans of the Coasters, and Buddy Holly, Bo Diddley and stuff. We grew up in Carrboro, North Carolina – I had my horror mausoleum where we just smoked tons of weed and drank beer, and other things and substances. But I was always spinning records in my place. That’s the stuff we grew up on.

“Sara turned me on to classical music, and me and her are big fans of Chopin and stuff like that. But I love torch songs – Brenda Lee, Patsy Cline, Ray Charles, and Eddie Cochran, Gene Vincent. And very obscure artists that people don’t know about too much, like Benny Joy, Roy House, the Rio Rockers. I’ve really been a musicologist in terms of finding rare and interesting material.

“This one has a lot of different types of material on it. Stuff a little bit like Stan Kenton, a little bit of surf music, a little bit of melancholy, obscure rockabilly. Stuff like that, man. It’s called Is That You in the Blue, which is a song on the record. We do a song called ‘Nowhere,’ by Benny Joy, that’s really neat, a really interesting sort of blues ballad. ‘Redemption’ by Johnny Cash. A song I wrote called ‘Girdjieff Girl,’  which is a little bit big band, a little bit surf/spy – but our own take on all that. And the song ‘Homicide’ by Myron Lee & the Caddys, which is just me on acoustic. But it’s a very authentic cut of southern rockabilly.

“For me, I’d really like to get some more modern songwriting under my belt. I just haven’t been able to do it lately. I’m a big fan of Pete Townshend, and I really like his songwriting. I’m not saying I want to be just like him, but – I don’t know, man, maybe a little bit more songs on self–reflection. But they have to be good, though.”

“I run into Jack periodically. I don’t see him too much. We made this 45 at his record plant, and he had us come up to New York to play with Wanda Jackson, and him backing her up. It was 900 people in a big hall, a really wild show. Later, me and Sara were saying to each other That was really fucking intense. He’s a man on the move, he’s a hard worker, and he’s a generous patron of rockabilly artists. He’s giving back stuff to people.”

“I would really like to have more money! I am so down on the wire these days, struggling just to make each month. Man, I can’t explain it. It’s karmic. It’s something that’s hard. Early on in my career, I was very self–destructive and I did not know myself at all. I made some pretty horrendous personal decisions. And I don’t know if that affected it, but people seemed to like that more! The more screwed–up you are, the more they’re cheering for you, which I don’t really want to live by now.

With the Jon Lindsay Band