Happy Runoff! How We Got Here

After seemingly endless candidate forums and social media controversies, the enormous field of 28 candidates has winnowed to six

The runoff election is Dec. 1.

THE DEC. 1 City of Savannah runoff election—for which early voting has been going on all last week and some of Thanksgiving week—is nearly upon us.

Incumbent mayors often cruise to reelection. Former Savannah Mayor Otis Johnson, though not without controversy of his own, was reelected with 70 percent of the vote, for example.

But a year of public outcry over rampant street crime—including many incidents in the tourism district, a relatively new development—and concerns over corruption and cronyism put Jackson, a 16-year City Council veteran, clearly on the defensive.

A challenge was inevitable, but few expected the first challenger would be Murray Silver, who announced his candidacy almost a year ago. The author and outspoken gadfly made waves, mostly on social media, with his frank analyses of how corruption and bureaucracy in City Hall waste taxpayer money and thwart police effectiveness.

But his campaign raised and spent virtually no money at all. Silver lost time and political capital early on when he got in a Facebook foodfight with South Carolina-based car dealer O.C. Welch, who publicly flirted with the idea of running for mayor despite apparently not having residency in Savannah.

Welch never did declare his candidacy, but he stood visibly right beside former Chatham County Commissioner Eddie DeLoach when DeLoach announced his own bid for mayor in August. (Welch soon boasted on Facebook, “Murray is done.”

Silver was soon openly claiming that Welch and/or local businessman Reed Dulany paid DeLoach to run in order to split the vote and guarantee Jackson’s reelection.

But O.C. Welch’s support didn’t really become something of a liability for DeLoach until Welch took his animosity for Murray Silver to a new level: In a Facebook post he implied Silver would wear a KKK robe as a Halloween costume.

Another social media controversy came for DeLoach when a group of Savannah Arts Academy students, ostensibly doing community service hours for his campaign, posted an odd video in which an Edna Jackson campaign sign was burned with the phrase “RIP.”

While Mayor Jackson, and in particular Alderman at Large candidate Joe Steffen, tried to rally black voters by comparing the students to the KKK, the video had little effect: DeLoach finished with only two percent fewer votes than Jackson, and Steffen failed to make the runoff.

As for Silver, he only garnered 12 percent of the votes but managed to keep a spotlight on himself after the election with a public “dialogue” on whether he’d endorse Jackson or DeLoach.

In the end Silver proclaimed “Savannah is too broken,” and declined to endorse either, encouraging supporters to write in his name in protest despite the fact that write-in votes aren’t recognized in runoff elections in Georgia.

Another frequent local pundit, Louis Wilson, entered the mayoral race almost solely on a platform of bringing high-speed rail to Savannah and City improvements to land near his own Westside home.

His impact was minimal, with only two percent of total votes cast in the general election.

The remarkably crowded field for the open Alderman at Large Post Two seat contributed to the unexpected result.

The candidacy of Brian Foster became controversial early on, as some local activists focused on Foster’s clear ties to the Chamber of Commerce.

Opposition grew when Foster was endorsed, along with all incumbents, by a notorious influence-peddling member of the local ministerial community.

Most offensive to some was Foster’s campaign helping fund a so-called “Sample Ballot” handed out at polls. It wasn’t a sample ballot at all, but a list of incumbents plus Foster’s name and face.

Adding to the controversy was the apparent fact that at many polling places the dubious flyers were handed out illegally within the 150 foot limit.

Foster’s circus act of positioning himself as an outsider while also boasting of being on a slate full of incumbents didn’t hurt him at the ballot box, however.

A potential runoff rival, SSU counsel Joe Steffen, failed to garner enough expected African American votes to make the runoff. Steffen’s progressive campaign was also impacted by the candidacy of newcomer Travis Coles, whose built-in appeal to Millennial and LGBT voters seemed to siphon off exactly enough votes to shut Steffen out of the runoff.

Alicia Blakely, a longtime vocal activist in the local African American community, had enough of a built-in following to stake a claim to the runoff. Her strident methods and affiliation with Al Sharpton’s National Action Network make her about as clear a contrast to the methodical, business-and-numbers oriented Foster as you’ll find.

Steffen for his part endorsed Blakely, who will have very solid black support. But the big question is will enough local white progressives show up to vote for her?

Easily one of the biggest disappointments for many observers was incumbent Mary Osborne making it into a runoff with Bill Durrence, the leading vote-getter in her district on election day. 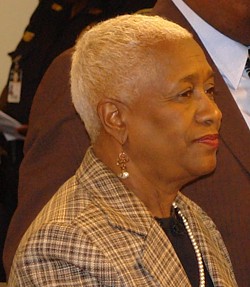 A very promising challenge from Detric Leggett seemed to be turned back in part by attacks on him from Osborne supporters alleging Leggett isn’t “black enough” to represent the district—which ironically is becoming more white with gentrification.

Durrence built on strong word of mouth following, and was both helped and hurt by Leggett’s quick endorsement—which appaently carried with it an agreement to help Leggett pay a small campaign debt.

Durrence’s political future now depends mostly on whether the Jackson/Osborne coattails are long enough to defeat him in the limited universe of runoff voters.