THE Savannah St. Patrick’s Day Parade — held on March 16 this year — is generally considered the second largest in the country, after only New York’s.

TOP O’ THE MORNIN’. For many members of Savannah’s Irish Catholic community, the day starts early indeed, with Mass at the Cathedral of St. John the Baptist.

One of the main spots for this activity is Chippewa Square, the one with the statue of Georgia’s founder, Gen. James Oglethorpe.

However, because so much trash was left in that square last year, the City is cracking down. No tables or tents will be allowed in the square, and they are asking that everyone bring non-Styrofoam coolers, i.e. the type you’ll bring back home with you instead of leaving in the square.

CROWD CONTROL: The squares along Abercorn tend to be by far the most crowded parade-watching areas. If you’re looking for a bit less crowded scene (but still pretty darn crowded), venture north to Broughton and Bay Streets or closer to the end of the parade route.

BOOZE CLUES: Savannah’s to-go cup tradition means those of age can carry a 16 oz. or less alcoholic beverage (no glass) in all public areas of the “Festival Zone.”

THE MAIN EVENT: The parade itself cranks up a little after 10 a.m. and finishes up somewhere in the 2 p.m. range.

Yes, the parade actually goes the “wrong way” around the squares. This tweak is designed to make entry/exit of emergency personnel more feasible.

If you hear very loud booms, don’t freak out: There are some floats which utilize fake cannon shots. 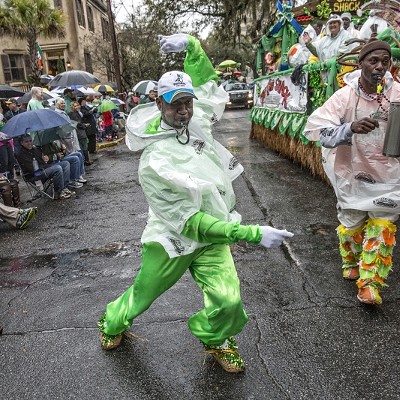 If you don’t drive