This virtual field trip will be available to schools by request

Courtesy of the Savannah Stage Company
Alexis Balaoing Ambrose plays the title character in the new Savannah Stage Company production of "Alice in Wonderland".
The Savannah Stage Company is inviting schoolchildren down the rabbit hole by presenting an imaginative virtual production of Alice in Wonderland. Since the Savannah-based troupe remains unable to stage large-scale plays for live audiences due to ongoing pandemic precautions, its dedicated artistes decided to expand its reach by launching the Savannah Stage Company’s first-ever “virtual field trip” with an aim of offering school-aged kids across Georgia and beyond opportunities to participate in a literary-theater experience online. While this virtual field trip will be available to schools by request – as well as a Q&A with the artists that created it and an interactive study guide – the company is presenting an online premiere of its new Alice in Wonderland adaptation via a Facebook Live streaming event from the historic Savannah Theatre at 7 p.m. on Jan. 30. There is no charge to tune into this play, although donations to support the Savannah Stage Company are gratefully accepted. This colorful version of Lewis Carroll’s classic story is a collaborative effort based on a script written by company member Alexis Balaoing Ambrose, who also plays Alice in the show. “Alice in Wonderland appealed to me because of its sort of nonsensical nature of the world that she falls into, and Lewis Carroll’s absurdism,” Ambrose said.
click to enlarge 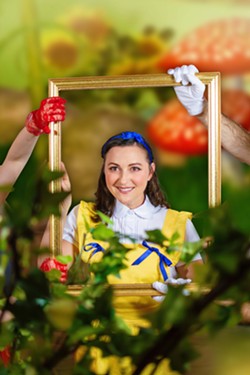 Courtesy of the Savannah Stage Company
Alexis Balaoing Ambrose plays the title character in the new Savannah Stage Company production of "Alice in Wonderland".
According to director David McCall, that absurdism can be perplexing for some audience members, but this Savannah Stage Company production is custom-made so that Carroll’s fanciful tale will be more accessible for youths. “I remember people talking about Alice in Wonderland not being their favorite story because it just seems like madness. But Lexi [Ambrose] did a really great job of giving context or a message to the madness,” McCall said. In this new adaptation, the audience will be given a fuller look at Alice’s everyday life and provide more depth to largely unseen characters in her world. The script gives Alice’s mom (DeAnna Laree Craig), stepdad (Rayshawn Roberts), and sister (Ashley Cook) a voice, while a tutor (Ryan Henderson) appears later as the White Rabbit, “much like The Wizard of Oz, how you have real-world characters aligning with fantasy characters,” McCall added. McCall said that preparing for this online show was unlike any other production that he’d ever worked on, with challenges including arranging “proper rehearsals” among cast members. “When I say proper rehearsals, I mean proper for 2020. Meaning a Zoom room, with me and a stage manager, Abbie Wells, and then all the cast in their respective spaces,” McCall said. “Who knows what the neighbors must have thought? Shouting lines from Lewis Carroll, but it was so fun!” While this style of remote direction was limiting in some regards, McCall said that the Savannah Stage Company thespians adapted well to the unconventional circumstances. “As a director, you try to be clear and honor everyone’s input as much as you can. You’re trying to build this world, and it’s already difficult while you’re in the same room. It’s crazy difficult when you’re all over Zoom,” McCall said. “Some things work in our imaginations in Zoom rehearsals that don’t work practically, but this cast was incredible at adapting and problem-solving.”
click to enlarge