The season for saison 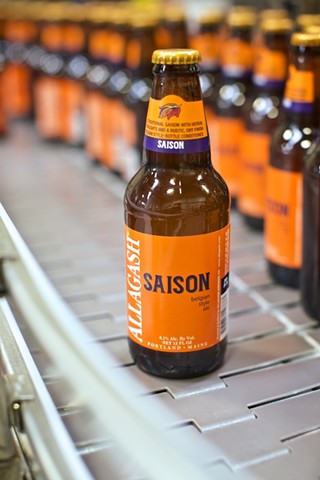 With temperatures slowly inching upward and pollen piling up on car hoods, it's obvious that springtime has hit Savannah.

While I’m partial to cooler temperatures and my allergies could do without the increase of yellow dust floating about, there is one thing I unequivocally love about this time of year. It’s saison season.

The saison is a style of beer with roots in 18th century French speaking Belgium and actually translates to “season.” The beer was brewed specifically for drinking by farmhands in the warmer summer months. That is why saisons are often referred to as “farmhouse” ales by some brands.

Modern-day saisons are characterized by ales that are light in color with a noticeable yeast profile. That yeast can add a slight fruitiness to pair alongside a touch of spice. Moderate to high carbonation gives each sip a nice spritz of bubbles to underly mild, grassy hops. Saisons are generally very refreshing beers despite their slightly higher than average alcohol by volume (ABV) percentages. Many popular labels register in the 6 to 8 percent ABV range.

Saisons share many characteristics with their close cousins, the French-originating Bière de Garde style. While Bière de Gardes also have traditional farmhouse roots and similar flavor ranges, these beers tend to derive more of their flavor from the malt base rather than the yeast. This can yield additional sweetness as well as a slightly toasted character.

Not that long ago, the saison style had faded from prominence and it was difficult to find the import varieties on store shelves, much less a domestic equivalent. However, it’s seen quite a renaissance in the past few years, with more American craft breweries reinterpreting old world recipes and adding their own unique twists on the format.

If you’re new to saisons, the first must-try on your list should be Saison Dupont from Belgium’s Brasserie Dupont. It’s fairly easy to find at bottle shops and even shows up locally on draft from time to time. It has a fresh, bright character that is highlighted by fervent carbonation, mild citrus and tinges of black pepper. It’s a solid warm-weather go-to beer and nicely complements a wide variety of food from picnic fare to fine dining.

Cooperstown New York’s Brewery Ommegang focuses on the creative re-imagining of Belgian beers, and their Hennepin is a world-class saison. Brewed with coriander, orange peel, grains of paradise and ginger, it expands on the classic Saison Dupont base with a wider range of flavors that work in tandem to create a crisp, hoppy beer that truly stands alone.

Boulevard Brewing Co.’s Tank 7, on the other hand, plays it more traditional than Hennepin; but it does add subtle notes of apple and pear to the expected citrus and lemongrass. The 8.5% ABV is very sneaky, however, so pace yourself and share some with friends.

While Saison Dupont, Hennepin and Tank 7 are long time favorites, there are two brand new saisons on store shelves this spring from respected American craft breweries that are also worth your attention.

Allagash Brewing Company is well known for their slavish devotion to traditional Belgian styles, creating tripels, quads and witbiers as a part of its main line since the brewery’s inception. However, Allagash Saison is its first straight-up saison offering in 12 ounce bottles released to wide distribution. Pared down to the essentials with the strong yeast base for which Allagash is well-known, the beer proves reverential to the style and is a nice American alternative to a traditional Belgian offering.

Sweetwater Brewing Company is located in Atlanta and every year releases a special one-off beer in a different style to commemorate its founding. For the brewery’s 17th anniversary, it has chosen a saison. A stark departure from Sweetwater’s base of sweet, hoppy beers, their 17th Anniversary Saison Farmhouse Ale is more traditional while introducing coriander and lemon zest along with a drier finish.

Saisons are ideal for pale ale lovers looking to expand into a new style with a broader range of flavor profiles. The recent gains in popularity mean that this spring and into the summer, there will be many opportunities to imbibe one of Belgium’s best beer traditions. So whether your day job calls for long hours in a sun-drenched field, or has you slouched in the glow of a blue-light computer monitor, the saison is delicious and refreshing for beer lovers of any type.