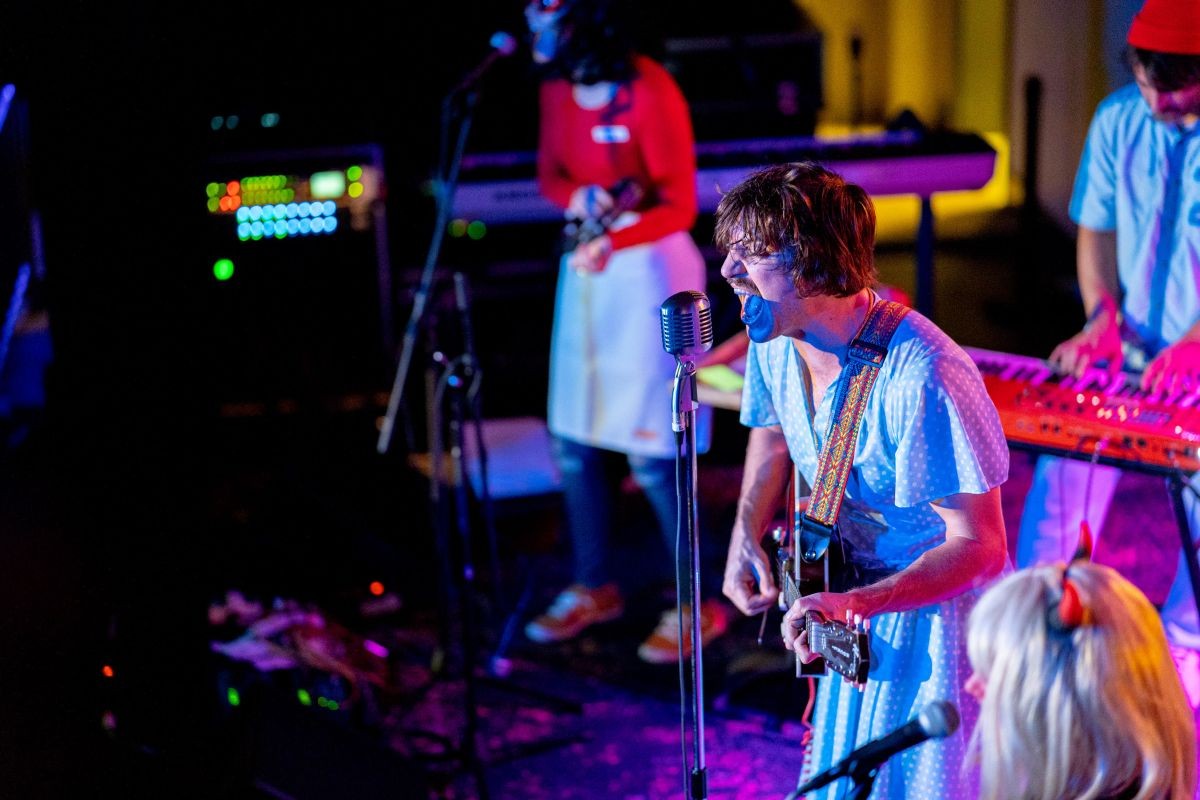 Photo Courtesy of Valentin Sivyakov
Reverend Bro Diddley and the Hips perform live on stage during a concert.
Ty Thompson tells me it’s fun to be ridiculous. As the front man of Reverend Bro Diddley and the Hips, he has almost a religious devotion to music, performance and the audience he’s charged with entertaining. “If I’m going to be on stage playing for people, why not dress up as a hotdog?” Thompson cheekily proposed. A ridiculous juxtaposition that surrounds a band whose music is anything but that. In fact, the Hips are a well-disguised, sophisticated amalgamation of forward music and theatrics. Along with fiancé Jhovana Aguilar on vocals and guitar, Jesse Centrella on organ, piano and vocals, Kyle Brown on bass and vocals, and husband and wife duo Jalen and Hannah Reyes on percussion, keys, drums and vocals, Thompson – aka Reverend Bro Diddley – and his hazy guitar manufacture a sound that takes pop music on a psychedelic trip to rock ‘n’ roll. “I think of our band as what a celebration of music can do for you,” Thompson said. “We are all into really different things and we come together with those influences to make our music.” The identity of the Hips was in part, born out of the influence of Thompson’s former band, The Hypnotics, who played a mix of cover songs from the 1960s and original garage tunes. After six years, the band dissolved in 2018 and Thompson was left with half a record. Instead of trashing it, he put together a new crew, re-tooled the 50s and 60s aesthetic of the Hypnotics and released “Reverend Bro Diddley and the Hips” in 2019. The self-titled, 11-song album debuted with the new band in September of 2019 and had an exciting reception. Despite being a pastiche of bands of yesteryear, it was the beginning of an undeniably catchy sound that the Hips would become known for. The Hips had gathered real momentum when the pandemic hit in 2020 and when the ability to perform live began to slow, their focus shifted to production and the making of their second studio album that Thompson hopes to release later this year. “We have definitely focused more on recording during the pandemic,” Thompson said. “We love playing live and miss it a ton. I guess the bright side is we have basically had enough time to make things super interesting and then go and curb some of the overly complex stuff I can tend to put in music I’ve been working on for too long.” According to Thompson, the downtime of the pandemic has caused the Hips to take inventory and really focus on what’s important and what they ultimately want to achieve with the new album, which is already up to 17 songs. “The result has been a lot less ‘building tracks’ by recording drums, then bass, then guitars, and a lot more about playing a song altogether until we get a take that feels special,” Thompson said. While the title and launch date are under wraps during production, the Hips released one song in October of 2020 that will likely make the cut for the new album. Titled “Devil Girl,” there’s an obvious bridge from the first album to what Thompson explains will be a collection of tunes that will take on the song’s moodier and spookier vibe. “The song is still pop and it’s kind of tongue-and-cheek like the first collection of songs, but the production is getting to a more sincere and moody place, which is how I see the new collection of songs,” Thompson said. New vibe aside, the second album has really taken on some drastic changes for the Hips in terms of production. The first album was completely written and produced by Thompson, while the new album is a collaborative production. According to Thompson, he has really pushed each member of the band to write and let their current musical influences seep in. “We are working on something really, really special and I’m glad we have been able to put some time into it,” Thompson said. Reverend Bro Diddley and the Hips will be opening for the acclaimed Nordista Freeze out of Nashville on May 15 at Victory North’s new, outdoor venue. If you’re lucky, you might catch some tunes from the new album. Here’s to hoping. For details about the venue, visit victorynorthsavannah.com, and for information about the band, visit reverendbrodiddleyandthehips.bandcamp.com.