The shot seen around the world 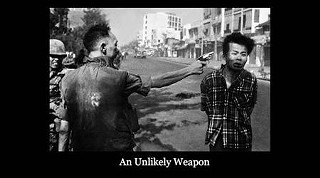 Most of us have seen the iconic, Pulitzer Prize-winning black and white photo of a Vietcong prisoner about to be shot in the head by a South Vietnamese police chief. Today we see that sort of extreme violence portrayed all the time, whether on cable TV or in dozens of video games. But in 1968, Americans weren’t used to such graphic images coming into their households.

In fact, that photo — taken by Eddie Adams, subject of the documentary An Unlikely Weapon: The Eddie Adams Story — may have done more than any other single thing to turn U.S. public opinion against the Vietnam War.

Using interviews with Adams himself (who died in 2004), colleagues such as Bill Eppridge and Peter Arnett, and luminaries like Tom Brokaw and Morley Safer, filmmaker Susan Morgan Cooper brings us this in–depth look at the influential photographer and the turbulent times he worked in.

Another Pulitzer-winning Vietnam photo — a little girl running down a road naked after being bombed with napalm, taken by Nick Ut  — is also explored in the film, including an interview with the girl herself, Kim Phuc, now a peace activist.

We spoke with Cooper last week.

Why this movie and this subject?

Susan Morgan Cooper: I have always been fascinated by news photographers, men and women who go into the line of fire to bring us back the story in pictures. About ten years ago I made a narrative film called Stringers about a photographer working in Vietnam. So I already had that passion when I was approached by the family of Eddie Adams to make the film.

Susan Morgan Cooper: I would agree, because you have testimony from Bill Eppidge, for example, the man who took the photo of the Bobby Kennedy assassination. And Gordon Parks, the first black photographer to work at Life magazine.

When I interviewed Gordon it was probably one of the most fascination interviews of my life. The man was 92, it was a few months before he died. I went to his apartment overlooking the East River and he opened the door in a backwards baseball cap. He gave me an interview for about two and a half hours. After that he said, “OK, you guys, let me rustle you up some dinner.” Then he sat down at a grand piano and started playing a piece he was working on with Yo–Yo Ma.

Access to him and people like Tom Brokaw and Morley Safer came because of the respect they had for Eddie Adams. I would call them up cold, and they had no idea who I was. I said, I’m doing a documentary on Eddie Adams — and they all said yes immediately without hesitation.

You get the sense that like any great photographer must be, Adams was very sensitive despite his blunt attitude.

Susan Morgan Cooper: It’s sweeter that way because he is such a self–deprecating character. I think it was a reporter from Hollywood who gave the best description of Eddie. He said Eddie is what every photographer would like to be — he’s handsome and has a gruff exterior to hide any sensitivity he had towards the devastation he sees.

You also feature extensive video footage of both the execution and the napalmed child running down the street. I had no idea so much archival footage of those incidents existed.

Susan Morgan Cooper: That was very difficult to get. I purchased stock footage from NBC Archives and it was very expensive. They made me jump through hoops in terms of what preceded the footage and what came after it in the film. That was very hard. There were times I thought they weren’t going to license it to me.

The joy for me was the discovery —  I think it was by my editor — that it was actually Eddie Adams in that moving footage. I stop the film and highlight him during the footage. That was such a great discovery to find Eddie in that footage.

There’s a bittersweet quality to the film, in that journalism will almost certainly not see the like of these courageous men again.

Susan Morgan Cooper: I couldn’t agree with you more. It was the most fascinating time for me being exposed to these men, because they truly are larger than life characters. For the most part they’re very humble, but very courageous men, with qualities you don’t really find today.

As one of them says in the film, at any given point there were only a handful of correspondents working the entire Vietnam War. But they accomplished more than probably 100 so–called “embedded” reporters today.

Susan Morgan Cooper: They had an all–access pass! They would ride with generals in the chopper to the front. I had a Vietnam vet come to my screening and he said he could remember Eddie Adams’s face caked with mud, going up ahead of the infantrymen.

You interview the “napalm girl,” Kim Phuc, all grown up. That’s almost a movie in itself.

Susan Morgan Cooper: Truly. The photographer, Nick Ut, was 19 when he won a Pulitzer for that shot. And he’s a good friend of mine now.

Kim is such an inspiration. She goes around the world promoting peace. If she can survive that — and she’s in pain constantly and she’s had an enormous amount of skin graft operations — and if she can forgive, then everyone should be able to forgive.