IT’S AN understatement to say I was preaching to the choir. It was more like preaching to choir directors when I made a presentation on the benefits of bicycling and walking to the Unitarian Universalist Church of Savannah’s "Green Team" on June 1.

These folks needed no convincing. The group’s vision statement confirms its members’ intention to “ally with like-minded communities to support the vulnerable, and evolve a resilient and sustainable way of living in our shared world.”

I’ve never turned down an opportunity to talk about how bicycling and walking can make our city safer, healthier, and an altogether better place to live. University classes, civic organizations, neighborhood associations — if they invite me I’ll be there early and bring a screen and projector.

While most of my audiences aren’t as receptive as the Green Team, the truth is the rooms are not as tough as they used to be when I started making presentations on biking and walking over a decade ago.

Early on I learned to stash additional “secret” slides after the apparent end of the deck that I could advance to when I needed to bat down popular, but inaccurate notions about bicycling and walking that frequently came up in post-presentation question and answer sessions.

I could depend on someone to erroneously assert that people who ride bikes violate traffic regulations more than people who drive or make the misinformed suggestion that people who walk and bike don’t pay their fair share of infrastructure costs. The Green Team harbored none of these notions. 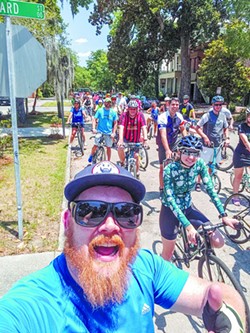 A ride organized by Brent Buice, South Carolina Georgia coordinator for the East Coast Greenway Alliance and a board member of Tide to Town, attracted 70 participants on a sweltering Saturday earlier this month, highlighting the growing interest in trails.

As I was concluding my presentation, Brent Buice was disproving another misconception about biking and walking infrastructure: The idea that sidewalks, bike lanes, and trails are unnecessary because people don’t use them. Buice — South Carolina and Georgia coordinator for the East Coast Greenway Alliance and chair of Friends of Tide to Town, the nonprofit working to promote an urban trail system in Savannah — led a tour of a trail that doesn’t even exist. On a sweltering Saturday at noon, around 70 people turned out for a ride that showcased an envisioned route along the banks of the Springfield Canal.

Just because the Green Team was more sympathetic than most to my message, doesn’t mean they spared me the tough questions. Alan Kindler, who organized the group’s Spring Sustainability Series along with Kevin Ionno, took me aside even before the presentation began and said, “John, I hope you are prepared to talk about how we can change the system.”

While the Green Team is probably more aware of this issue than the general public, I detect growing recognition that our transportation and land use systems create communities where it’s difficult, dangerous, and even deadly to travel on foot or by bike. People who want to drive less face challenges, both practical and existential.

This creates the kind of tough questions Kindler hoped I’d be ready to answer, including one asked by an earnest young couple who live in Pooler.

Should they try to organize a bicycle and pedestrian advocacy organization to push back against automobile-centric planning and make their city safer for people who walk and ride bikes, or give up and move to Savannah?

Should they try to change the system or is Pooler a lost cause? I did not have a good answer.

Less than a week later, on June 6, I joined Paula Kreissler of Healthy Savannah, Whitney Shephard of Transport Studio, Bridget Liddy of the City of Savannah’s Planning and Urban Design department, and Robert Thornton of the Coastal Health District on a panel discussion called “Infrastructure and Healthy Communities.”

It was organized by Leadership Southeast Georgia, a program intended to “develop and nurture engaged community leaders to effectively work promoting positive growth while improving the quality of life” in Bryan, Bulloch, Camden, Chatham, Effingham, Glynn, Liberty, Long, McIntosh and Screven counties. I suspect I would not have needed my secret slides with this group, either.

Kreissler set the stage for the panel discussion earlier that morning in remarks to LSEGA participants by explaining her desire to differentiate between health and healthcare.

By focusing on the former, we’ll need less of the latter. Providing safe spaces for recreation and active transportation is a proven means to that end.

Kindler made a similar point while introducing me to the Green Team with a quote from an article by Cameron Brick, a postdoctoral research associate at the University of Cambridge.

Brick wrote, “once I began cycling to work, it changed my life in unexpected and lovely ways. I’m fitter, more alert, happier, and work more effectively — as is the case for millions of other cyclists. If cycling were a new drug with the same benefits, it would make the front page of every newspaper.”