The slow clock of the Okefenokee Swamp 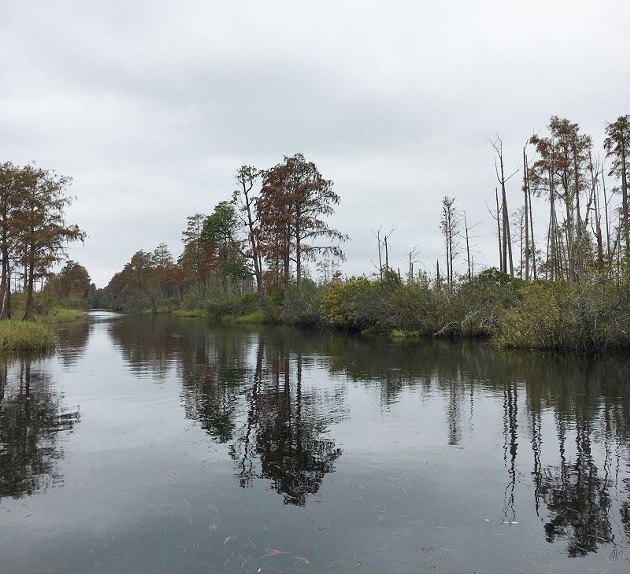 AM I the only one wondering where the hell November went?

I mean, I haven’t even finished snarfing my kids’ Halloween candy and now it’s time to pull out the menorahs again? If it weren’t for the cranberry sauce acid reflux I’d swear Thanksgiving never even happened. It’s like the whole month got gobbled up while I was busy counting gropers.

I’m sure it has everything to do with how we parse our time into our Google calendars so Siri can alarm us of our next therapy appointment and that we forgot to pick up the dry cleaning and our youngest child from volleyball practice.

Still, I don’t see how it’s possible to have lost the entire month since practically every second of it was accounted for inside my phone. Then again, I may have started in on the mulled wine a little early.

We all know that life is more than chasing grains of sand down the hourglass, but it seems more difficult than ever to carve out some perspective in this hustle-and-flow world. The only remedy that ever works for me is to head somewhere out of cell tower range, where most of the residents don’t have opposable thumbs and nothing much happens for a million years at a time.

It’s not as far away as we might think: A prehistoric wonderland lies only about two hours southwest of here, tucked away near the Georgia-Florida line like a forgotten redneck relative.

I first heard about the Okefenokee Swamp from my husband, who once threatened to leave the children there during a particularly annoying road trip.

Despite his descriptions of angry alligator posses and mosquitos that could carry off a sassymouthed little sister, paddling through the tea-colored waters always sounded like an intriguing adventure. Due to life’s breakneck schedule of soccer games and yard work, however, we never found the time.

That is, until Gray’s Reef Communications Director Michelle Riley learned I’d never set foot in the swamp. Always eager to get this awkward landlubber on the water, Michelle insisted on organizing a canoe outing for us with naturalist Cathy Sakas, which gave us an excuse to put off an entire Saturday’s worth of raking leaves. 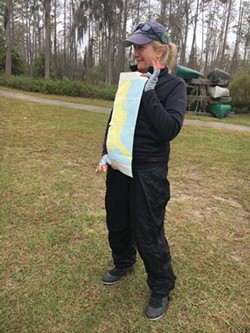 Naturalist, filmmaker and aquanaut Cathy Sakas has been leading trips into the Okefenokee for over 40 years.

After multiple promises that it’s very rare to get seasick in a canoe, we all met up on a chilly morning to caravan down I-95 to the Suwanee Canal Recreation Area in Folkston. (The kids, though now large enough to carry off their mother, declined the invitation.)

As our tires crunched into the parking lot, I immediately sensed the swamp’s long history in the way the wind wound its way through moss-shrouded cypress trees. And also the pair of reptilian eyes I spotted peeking out above the inky surface of the water.

“Alligators don’t attack canoes, do they?” I asked Cathy as she expertly slid her trusty red vessel from the roof of her Volvo onto to the bank.

“If they do, just stand up,” she counseled casually. “Gators orient horizontally, so when you stand, they think you’re much bigger than you are.”

I was about to ask how I was supposed to stand up in canoe without tipping us over and becoming swamp stew when Cathy handed me a paddle and added with a grin, “Besides, the bears are much more dangerous.”

I did not hightail it back to the car, figuring she’s been leading trips on the Okefenokee for over 40 years and hasn’t lost anyone yet. A retired scientific educator and oceanic diver with NOAA, Cathy is one of the Okefenokee’s most knowledgeable and generous proponents and has been showing off the swamp’s diverse, ancient beauty for decades, first as a graduate student at Armstrong in the 1970s, then in the earliest days of Wilderness Southeast and as an accomplished documentary filmmaker.

In spite of her affinity for places that run on the slow clock of geological time, she’s managed to pack a whole lot of of activity into her own evolution: She’s also traveled the world several times over, co-founded the international non-profit Ocean Exchange and has spent practically half her life underwater, including a stint as an Aquanaut at the Aquarius Undersea Laboratory in the Florida Keys. She officially "retired" a few years ago, but continues to chair the Gray's Reef National Marine Sanctuary Foundation and never misses a chance to get out on the water.

Above all, however, Cathy is a patient and passionate teacher. Before we pushed off from the banks, she broke out some maps—on actual paper—and gave us the low down on the land: The surrounding 700 square-mile black water swamp is North America’s largest, formed after continents collided hundreds of millions of years ago and ancient oceans dredged back and forth to leave a lip of land known as the Trail Ridge. Rainwater and runoff filled the shallow bowl around 10,000 years ago, trickling off to slowly create the channels of the Suwanee and St. Mary’s rivers.

Home to a vast variety of biological bounty including three dozen species of amphibians, fourteen families of fish, hundreds of species of birds, plus a toothy menagerie of snakes, bobcats, bears, panthers and more gators than anyone can count, it was also inhabited for a few thousand years by the indigenous Oconi people, who dubbed it “land of the trembling earth” for its giant floating mats of peat.

These boggy platforms form when there’s not enough oxygen around for bacteria to decompose the millions of pounds of dead plant matter that sloughs off the surface of the water, and the peat piles up.

So does the pressure from methane, a by-product of the anaerobic process that can cause blowouts of swamp gas, which may also happen on a six-hour canoe trip after a large holiday meal.

While the Okefenokee experienced most of its earthly drama before humans came along, we’ve still managed to assert our irritating influence. Before FDR designated it a protected wildlife refuge in 1937—basically four seconds ago in swamp time—industrialist and logging scion Capt. Henry Jackson ordered the Suwanee Canal dug in the 1890s, with the intent to punch through the Trail Ridge to the St. Mary’s River. The effort failed due to bad engineering and the fact that it was just a terrible idea.

“They literally tried to drain the swamp,” explained Cathy with an almost-straight face as we slid our canoes into the canal with barely a splash.

We paddled along the tree-lined banks to a less-used tributary, but had to turn back to the main channel because the way was choked with new grasses and sedge.

The lush greenery was a welcome sight to Michelle, who had last been here in 2012, after a lightning strike set off a fire that burned for a year, sending smoke and haze from Atlanta to Jacksonville.

“It was like a bomb had gone off here,” she recalled, describing a denuded landscape. “It looks completely different now.”

Last summer, another blaze destroyed hundreds of acres of private property adjoining the refuge in a single day, prompting evacuations and concerns for the area’s much-needed tourism dollars.

“The swamp needs to burn in order to make room for new growth,” shrugged Cathy. “But how do you mitigate it when fire moves beyond its borders? That’s the current threat.”

Other threats have included an attempt in the 1990s by DuPont to mine the swamp for titanium, but that was foiled by a showing of so much public opposition that the chemical company relinquished its mineral rights there forever. (Protests work, people!)

More management and resources are desperately needed by the U.S. Wildlife Service to maintain and protect the boundaries of the swamp, but it’s clear that nature is still winning in the Okefenokee.

Surrounded by a carpet of majestic white lilies that have been blooming here for millenia, it’s easy to be reminded of the enduring resiliency of life, even if our own lives and patience may be short. Out on the wet prairie, the chill kept the bears and gators away, and the calls of red-bellied woodpeckers and sand hill cranes filled the air.

Cathy produced portable microscopes so we could examine the tickseed sunflowers and bladderwort at the cellular level, and I wondered how long it had been that I’d looked that closely at something that wasn’t on a phone screen.

But the swamp isn’t here for my existential angst; in fact, it kinda just swallowed it up. Guess that’s what happens when you sit in a canoe for a split second of its long, slow clock. 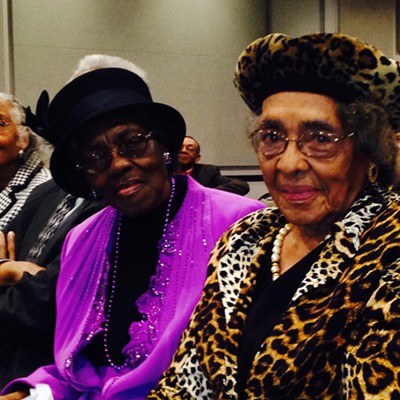