The Starland Village Files: Part One

Next: 2018, zoning battles, and the City Manager's override.

Opponents say the project — comprising a multi-story, modern residential building, an event space in a historic church, and a large parking garage — is simply too voluminous and out of character for the historic neighborhood.

Starland Village recently passed another hurdle on Aug. 28 at the Metropolitan Planning Commission, when its development plan was approved.

At that meeting, City Manager Rob Hernandez personally took over authorization of Starland Village’s Certificate of Appropriateness, using a clause in the Mid-City zoning ordinance allowing him to serve as sole “Design Administrator.”

But Connect Savannah has obtained emails that are part of the public record which show that the City’s efforts to push through the project go back much further. 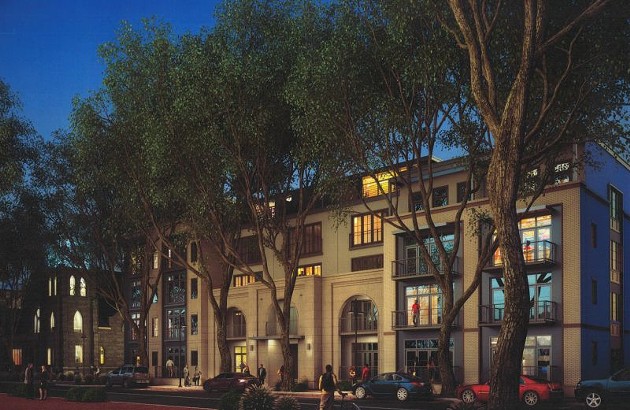 One of the 'pretty pictures' referenced in an email

The emails display what some might see as an overly cozy relationship between City officials and The Foram Group, the company developing Starland Village.

At minimum they are a window into the interconnected and complex nature of the way development sometimes happens in Savannah.

• The Foram Group identifying an active police precinct on Bull Street as needed for the development, then working with City officials to declare the property surplus in order for Foram to purchase it;

• A Request For Proposal (RFP) process for buying that surplus property that one could argue seemed specifically designed to benefit The Foram Group;

• Robert McCorkle, attorney hired by The Foram Group to represent the project

The saga begins with a breakfast meeting in January 2017 between Foram’s Travis Stringer, Rob Hernandez, Liz Taschereau, and Mayor DeLoach to discuss the Starland Village proposal.

“I think the meeting went really well and this project will be a great catalyst for the redevelopment of the Bull Street corridor and ultimately help towards accomplishing many of your goals for Savannah.”

THE ISSUE of the police precinct on Bull Street comes up almost immediately.

In a Jan. 2017 email, Stringer writes to Liz Taschereau and DeLoach:

“I am very glad to hear you guys drove by and like the property and concept... we are working on getting the one pager and proposal for the city property on the corner of 38th and Bull (police traffic unit) to you.”

“We are nearing a proposal for the city property where the traffic precinct is located on Bull and 39th and are in the process of identifying alternative locations for the precinct. I think it would be good to have a conversation with the police chief to get a better understanding of where they would like to be.”

In a particularly interesting email on Feb. 17, 2017, Stringer writes Taschereau, confirming that the breakfast meeting included a discussion of the City declaring the precinct as surplus, with Foram as the intended buyer.

He also seems to insinuate that the City shouldn’t follow regular legal protocol:

“I am reaching out in regards to the city property on the corner of 38th and Bull st. Last we met with Rob, it was mentioned at breakfast that we should send out a proposal to you for the city property. We are nearing a finished product to send you. Before doing so, I would like to get a better understanding of exactly the quickest and best process to go about this. We would prefer not to go through an RFP process as that is time consuming. [emphasis ours] In addition, we are working on identifying some properties on the westside (MLK corridor) but need a better idea of what the police chief/city manager would be interested in. Is this necessary in order to go forward with the city property on Bull?”


MEANWHILE, on March 6, 2017, Melody Dawkins of The Foram Group invites Alderman Bill Durrence, in whose 2nd District Starland Village would go, to meet and contribute input:

“We are working on a project that’s (sic) goal is to help facilitate the growth of the creatives and innovators in Savannah. We want to collaborate as much as possible with the community and like-minded individuals with similar visions. I would love to get together when you have time to learn about your thoughts on Thomas Square-Starland community and your vision for the neighborhood.”

The meeting happens, and on March 13, 2017, Dawkins writes Alderman Durrence:

“Thank you for meeting with us last week and sharing your input! Would you be interested in coming by next week? We can fill you in on details of the project and show you pretty pictures from the architect.”


ON March 14, 2017, The Foram Group creates an account with the City so that they can be eligible to respond to City Surplus Property RFPs.

“Just following up on the status of your project as we are moving forward with the surplus property transaction.”

“I have been keeping an eye out everyday for the RFP on the city property. There have been some minor improvements since we last spoke that I think improve the overall project and reduces some height on the portion of property on Whitaker... All in all, we will be ready to submit our proposal once the RFP is released.”

To which Taschereau replies:

“will ask Rob [Hernandez] if he wants a one on one update from you directly so he is fully informed.”


ON April 6, 2017, Taschereau reaches out to the City’s Sean Brandon for the first time about Starland Village:

“Do you have time to meet tomorrow to review a project - just [for] you to get some ideas and guidance.”

On April 10, 2017, Stringer writes to Taschereau about what is apparently a now-abandoned idea to build a larger parking garage a block from Starland Village:

“After our conversation, I did a ton of thinking on how we might be able to fix the project/neighborhoods current and future parking needs, public transit, etc. that I believe we should all take a hard look at. The city property at 2203 Abercorn st (Cross Street 38th street between Drayton and Abercorn) is actually the same size as the site with the parking structure housing MPC. ... Also, it is only 1 block from our project on 38th. Since it is on Abercorn, instead of discussing moving a section of the 14 line of CAT, we could discuss adding a stop at this location. Then, we should look at redeveloping this property as a parking structure with commercial wrap in the form of offices, neighborhood retail, or artist studio spaces, etc. We could turn this into a central transit hub for the entire Starland neighborhood. We could easily create over 200+ parking spaces to sustain current and future projects.” [emphasis ours]

The next day, Stringer emails Brandon:

“I do know that CAT has the 14 line that runs on Abercorn all the way out to Savannah mall across from Armstrong. Although I do want to give Armstrong/Georgia Southern students direct access to our project, it is important that we create public access for those individuals outside of the university system. In addition, I hope that we can also work something out with the downtown loop. I know that it would not only be beneficial to our project but to the neighborhood as a whole. I know public transit is a big topic of conversation with both homeowners and business owners in the neighborhood.”

On April 17, 2017, the bidding opportunity for the police precinct at 2115 Bull St. is officially open for proposals.

“I’ve attached a map and some photos of the bike share siting study that we performed a while back.  As you’ll notice, once (sic) of the proposed sites is at 36th & Bull, not far from the new development site... As for the shuttles, I talked to our CEO and our CFO the other day about extending the shuttles south of 37th Street and they’d like to discuss it with our Board.  Doing such an extension will be a policy decision [emphasis ours] because it will have an impact on our paratransit revenues and potentially our fixed route ridership (if passengers end up using the new shuttles instead of our regular buses).”

“Do you have time to talk with representatives from FORAM (Travis Stringer) and myself about what it would take to move the north/south proposed shuttle further south into the Starland district...?”

ON July 25, 2017, Pam Laws with the City’s Purchasing Dept. emails Travis Stringer and several other recipients that the City has rejected all proposals submitted to purchase the surplus police precinct.

“It is the City’s intent to sell this property to a proposer that maximizes the best use of this property; however, the City has decided to reject all proposals that were submitted in response to this Event.  The RFP is being revised to better define the City’s criteria for submitting a response.”

Exactly a month later, Foram and other potential bidders get official notice that the second round of RFPs on the surplus precinct is open.


ON Oct. 17, The Foram Group makes their official proposal at a meeting with Hernandez and others.

By Nov. 6, 2017, Foram is named the winning bidder, and David Keating, City Director of Real Property Services, emails Stringer about formalizing the sale:

“The City Manager has agreed to place this matter on the agenda for Thursday.”

The next day, Alderman Bill Durrence is invited to a “special celebration” of Starland Village set to take place Dec. 1. Mayor DeLoach will get his invitation Nov. 21.

By Nov. 10, 2017, City Council had formally approved the sale of the surplus police precinct to The Foram Group.

NEXT: 2018, zoning battles, and the City Manager's override.