The stars according to Bobby Zarem

IT'S 3 P.M. on Yom Kippur, and the first thing Bobby Zarem does when I walk into his Ardsley Park living room is offer me a piece of chocolate.

“Oh that’s right, you’re fasting!” he says apologetically, pointing me to a chair instead.

I look at the candy longingly and sit down, determined to stay focused on interviewing the legendary publicist in time for Savannah Film Festival season, even with a grumbling stomach. I’m probably already a heretic for working on the Day of Atonement anyway, but I’m in good company, since Bobby confesses he hasn’t observed Jewish holidays since he was a little pisher.

“I used to sneak out of synagogue services at the BB Jacob to get an egg salad sandwich,” he laughs, slapping his knee.

God must’ve been in on the plan, ‘cause those egg salad days were the fulcrum of the maven Bobby Zarem was to become.

After an illicit snack with the other Hebrew school dropouts, he’d head over to the Weis Theatre on Broughton to take in the latest Errol Flynn or Rita Hayworth flick, seeding an unstoppable passion for the transformative and transportive power of the silver screen. 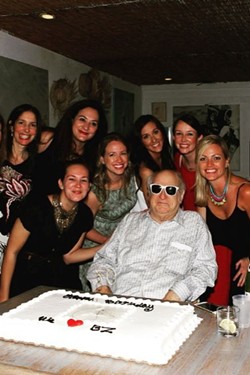 A few members of “Zarem’s Harem” celebrate the 80th birthday of the PR legend.

Most of us can relate (hosannas to Eisenhower Cinemas for offering refuge and free showings in the days after Hurricane Matthew!) But the remarkable thing about BZ’s love of movies is how it grew into a 55-plus year career of making audiences love them, too.

Born and raised in Savannah, he followed his older brothers on the nice Jewish boy path to Andover, Yale and then New York, where there was a short-lived gig on Wall Street before he chucked the idea of law school.

“If I had to spend one more morning waiting for the subway, I was going to jump in front of a train,” he recalls with a grimace.

Providence provided a dream job at a PR agency, and so BZ began honing the art and craft of creating stars. Countless household names—including John Travolta, Ann-Margaret and Arnold Schwarzenegger—owe their professional arcs to Bobby Z, who snared the editorial attentions of Life and Time with earnest eight-page pitches and handwritten thank you notes.

“I would have a vision for every person and project, and I knew what would attract people,” says the man Newsweek once dubbed “Superflack” after he filled a NY subway station with 500 celebrities and VIPs for the premiere of the Who’s Tommy. (Turnabout for that shitty stock broker job, no doubt.)

Another columnist once described him as “more connected than a set of deluxe Legos,” but his ability to network also extended to places. He claims the “I Love New York” campaign that brought the city out of its terrible tourism slump in the 70s, and his small Southern hometown has received its share of press over the decades.

“I realized how fantastic Savannah was but the rest of the world didn’t know it, so early on in my career I started getting column items and stories in New York and international papers,” he crows, citing mentions of the Hostess City in the NY Times, Vanity Fair and the Paris Herald Tribune.

And of course, there’s the Savannah Film Festival, which he helped SCAD launch into the stratosphere by using his Legos to bring big, HUUUGE names to town every October for 15 years. In 2010, the same year he moved back home for good, life made one of those amazing circles when he accepted the festival’s Lifetime Achievement Award onstage at the Trustees Theatre—formerly the Weis, where he’d ditched Torah study for matinee idols all those years ago.

His partnership with the festival ended in 2014, but the BZ machine continues to thrum.

As I sit drooling over the box of chocolates, he takes calls from Page Six columnist Richard Johnson and negotiates a cameo on the Bravo reality show “Southern Charms” as assistant Jeremy Scheinbart handles the Comcast rep and AC guy who have come around after the hurricane.

While he’s no longer the manic nightcrawler depicted by Al Pacino in People I Know, BZ still goes to the movies a few times a week and doesn’t discount taking in a screening or two at the festival. He’s on the phone constantly—the same landline his parents installed in the 1930s—stoking relationships near and far, though these days he’s less of a star nebula and more of a bona fide planet.

Celebs like Michael Caine and Eric Idle come to visit on the regular, and Savannah folk of all ages gravitate to him for his stories and—admit it—maybe a sprinkle of that famous stardust. (I mean who doesn’t want to sit next to Gerard Butler at Mrs. Wilkes?)

But the real reason people love Bobby Zarem is because he’s still wicked fun to be around, gossiping with unadulterated glee and introducing people to each other with genuine eagerness to see what comes of the connection.

His orbits were in full effect on the recent occasion of his 80th birthday at the Tybee Island Social Club. Owners Sarah and Kurtis Schumm tended a spread of Lowcountry Boil and steamed oysters as childhood buddy and car czar Dale Critz shook hands with Londoner Charles Frazier, circled by power couples India and Robert King, Karen and Kurt Oelschig and Drs. Carmela and Chris Pettigrew.

Savannah Philharmonic conductor Peter Shannon lounged on the patio next to actress and Tybee resident Diana Scarwid while nephew Robbie Zarem waxed on about fuel cells with Foss and Chris Hodges. Overseeing hostessing duties were Beth Vantosh, Lisa Kaminsky and Karen Guinn of the group of doting women I call “Zarem’s Harem.”

As the couple of hundred other guests schmoozed, the honoree sat in the middle of the room, grinning from one tuft of white hair to the other.

“It was the ‘who’s who’ of my Savannah, my world, even if some people couldn’t make it,” he reflects a week and a half later as we sit in the living room, pointing out the birthday bouquet sent by Catherine Zeta-Jones and Michael Douglas on the coffee table.

All around his childhood home is evidence of his world, from signed movie posters to framed photos of him with Tom Hanks and Christy Turlington. Also on the wall is a glowering portrait of the publicist as a young man painted by his late brother, Danny, the famous stylist credited for inventing men’s casualwear.

His other brother, Harvey, a renowned Hollywood plastic surgeon, passed away in 2015. The youngest Zarem mensch carries on, insisting that he’s already planning his 90th birthday party.

If you’ve ever hung out with BZ, you might recognize some items missing from this tableau. But the thing about interviewing publicists is they’re very clever to tell you what’s off the record. Cross him and he’ll see you next Tuesday, if you catch my drift.

But all anyone really needs to know is that though Bobby Zarem may have exchanged the Hamptons for Tybee Island and Elaine’s for Circa and Cotton & Rye (and The Grey and The Vault; seriously, don’t ask him to pick a favorite restaurant), his star is shining bright as ever.

As I’m leaving to get back to synagogue and finish atoning for the year’s sins, I ask him if wants a ride, just for giggles.

“Nah, what for? I don’t have a single regret,” he chortles, eyes twinkling.

“But here, take some chocolate with you. You might want it for the movies later. You’re going to the movies, right?”