The state of Lonestar

COUNTRY sensations Lonestar bring their catalog of hits to The Stage on Bay for a special Military & First Responder Appreciation Concert this weekend.

Formed in 1992, Richie McDonald, Michael Britt, Keech Rainwater, and Dean Sams have been keeping their sincere take on pop-country going for decades.

Originally called Texassee, the band formed after meeting in Opryland USA theme park in Nashville. The band made its live debut in Nashville in 1993, signing to BNA Records in 1995 and releasing Lonestar Live, a live EP recorded at Nashville’s Wildhorse Saloon, that year.

Guitarist Michael Britt, a Fort Worth native, grew up around country music in his hometown and shared musical tastes with his bandmates.

“We’ve all lived around [Dallas/Fort Worth] for some of our lives and listened to the same kind of music on the radio,” he says. “We were around the same kind of bands and everything, even though we had different influences, we all had that in common. When we made it to Nashville, we were all on the same page.”

While living in Austin, Britt dug into the blues and rock scene, which later influenced his guitar work.

“I was really into the blues and rock stuff,” he recalls. “A friend of mine in a country band talked me into joining that and I fell in love with it. I incorporated blues and rock stuff and learned country stuff, too. Country’s a great blend of different styles.” 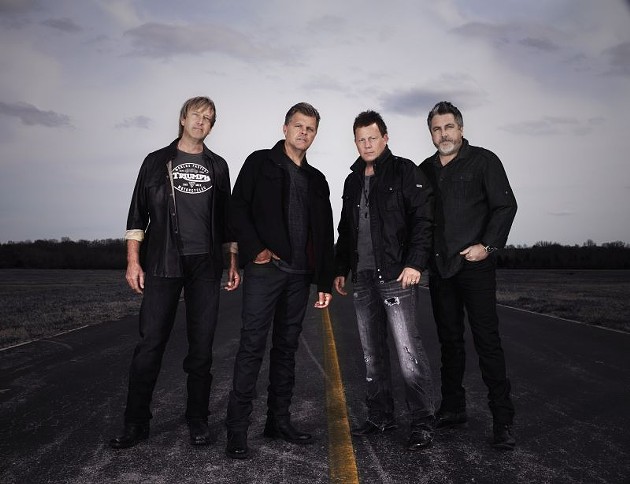 Over the years, Lonestar has won fans over with genuine lyricism about family, love, and human connections.

1999’s sweeping ballad “Amazed” became a definitive track for the decade and remains a top pick for weddings and lovebirds trying to find just the right tune to convey their feelings. As Lonestar’s longest-lasting number one single and biggest hit, the song spent eight weeks ruling the Billboard country chart. The song is only one of two country songs in the 2000s to hit number one on the Hot 1000.

Fatherhood is a running theme throughout Lonestar’s best-known work. 2003’s “My Front Porch Looking In” is an upbeat song about a man’s adoration for his wife and children. “I’m Already There” tells the story of a man on the road, calling home and reassuring his family of his love for them.

The tender, tearjerker became a modern country classic, peaking at No. 1 on the US Hot Country Songs chart and No. 2 on the Adult Contemporary charts. In the “Message from Home” version on From There to Here: Greatest Hits, the band even included dubbed-in phone calls placed by family members of soldiers as a tribute to the military. “We write about ourselves,” Britt explains of their lyrical approach. “That’s just something that’s really important to us: our families. And it just kind of shows in the music. They’re songs that mean something to us in some way. And it seems like family songs seem to mean something to our fans, as well.”

The band writes among themselves and also works with some of the hottest writers in country music.

Britt says finding the right writer is like “casting a movie.”

“We have an idea, and try to find people who make that idea come out the best,” he says. “When we decide to work on new records, we book writing appointments, get together amongst ourselves, find a song that creates the tone for the album.”

That was certainly the case with “Never Enders,” the declarative, unifying title track of the band’s 2016 album.

“We’re lettin’ goers, we’re hold-on-ers/We weren’t born to be goners/We dig deep, we go long/Where we come from is strong/We are changers-with-the-timers/We are lovers, we are fighters/We came here to stay, ain’t never gonna walk away,” the verse preaches.

“‘Never Enders’ was the song that set the tone for the rest of this last album,” says Britt. “We loved it from the first time we heard it, and that’s what we wanted to lead with.”

Life on the road and stage hasn’t changed much for Lonestar over the band’s 25-year career.

Britt and the band look forward to performing hits, deep cuts, and new tunes for Savannahians.

“We’ll have a few surprises,” he says. “People forget how many songs they remember of ours and will say, ‘I totally forgot about that song!’ Our show’s show’s chock-full of songs people know. And we’ll throw in a few curveballs.”

Speaking of The Stage On Bay , Lonestar