The street-level impact of passing NewZO

LAST WEEK a group of citizens stood before Savannah City Council and urged elected officials to adopt an ordinance that would allow Savannah to be Savannah again. Whitney Shephard was among them.

“This is the big deal. We live in a city that is an international model for walking and biking. It is why tourists flock here. But, residents deserve to enjoy that same comfort and mobility. The current ordinance actually prohibits the development patterns that make our city a destination across the world. NewZO is far more consistent with Savannah’s character,” said Shephard, principal engineer/planner for Transport Studio, a transportation planning and engineering services firm. 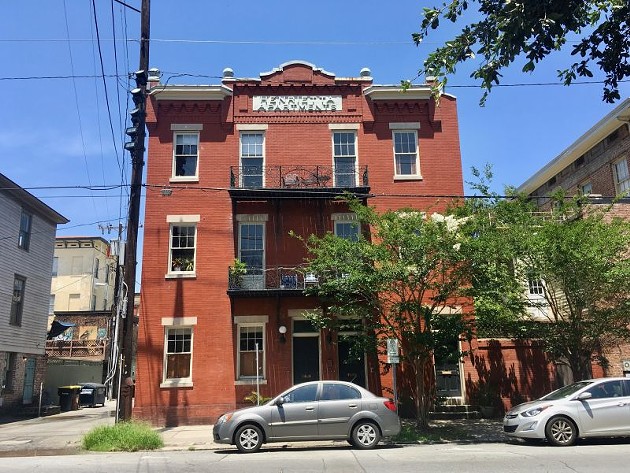 This charming historic apartment building could not be built today because it does not provide off-street parking to residents and exceeds density regulations set forth in Savannah’s zoning ordinance, which was passed in 1960. If adopted, NewZO will allow more housing options and even improve access to healthy food.

Short for “new zoning ordinance,” NewZO would replace the current ordinance, a relic from 1960.

As I have written in the past, some of Savannah’s most cherished public spaces — including Forsyth Park — could not exist if we wanted to create them today because there’s not enough parking to meet parking minimums.

The current zoning ordinance superimposes suburban style parking requirements on older areas of the city, which is bad for business. And bad for people.

“Today, parking requirements are largely identical across the city. That means that a new store in town has to provide the same parking as the Oglethorpe Mall or a suburban strip center. Our current excessive parking requirements — written in the 1960s — deter walking and biking for a lot of reasons,” Shephard said.

“Who wants to walk across a sea of parking to get to a cafe or shop? Or bike through a parking lot where drivers aren’t expecting to see them? By making parking requirements more reasonable, we shorten the distance someone has to walk from the street to the front door. We make that walk safer and more comfortable. We also don’t waste space on pavement but instead make it available for uses like schools, parks, or more commercial space.”

And under the current zoning ordinance, there’s less likely to be a café or shop to walk to in the first place. Desirable housing options are also limited.

“Many of the areas downtown and midtown can’t be replicated under today’s ordinance. Carriage houses and garage apartments — what we call accessory dwellings — are largely prohibited today even though they are all over our thriving neighborhoods,” she said.

To see the strong demand for accessory dwelling units, one need only look to the Ardsley Park Open Chat Facebook page, where posts by people seeking carriage house apartments are common. Appealing to a broad range of renters, from young professionals to downsizing empty nesters, ADUs are an important part of the housing landscape.

Shephard said, “Accessory dwellings offer housing choice, but they also make neighborhoods more walkable by boosting density. With sufficient density to support shops and restaurants, residents can choose to live in neighborhoods where they can walk or bike to markets, drycleaners, cafes, and pharmacies.”

NewZO will not only improve mobility and housing options, it will also help with another important issue, on which Shephard has worked diligently for many years: access to healthy food.

When working on a healthy food retail incentive package she realized that insufficient residential density under the current zoning ordinance limits the feasibility of grocery stores and other desirable retail uses in many neighborhoods.

“If we want to walk to a cafe, pharmacy, or small grocery store, then we need to allow for more housing in appropriate locations in our neighborhoods,” she said.

Shephard described an “aha moment” that encapsulates the intersection of zoning, healthy eating, and active living.”

“I was talking to a group about how Twickenham used to have a couple of grocery stores nearby. George Seaborough told me he didn’t get why I am always talking about housing policy until I said, ‘We won’t get grocery stores in our neighborhoods if we don’t find a way to increase the number of rooftops to create a viable market for that store. Neighborhoods aren’t walkable if they don’t include places to walk to.’ So, even though density is a bad word to some people, we need more density and diversity of housing types to create walkable neighborhoods.”

“Mixing uses helps create a healthy neighborhood where children can walk to school, a grandmother can get a gallon of milk at the corner store, and neighbors can meet at the park for a picnic. Without these walkable destinations, a neighborhood is like any other place where people have to drive to get that milk,” she said. “Mixed use planned developments under NewZO will let people decide if they want to live near their work, walk to a local store, or bike to the library with their kids. Mixed use can add jobs to an area, improving quality of life for residents even more.”

Shephard said she is encouraged by the momentum that’s built up behind NewZO and credits Bridget Lidy, director of the City’s Planning and Urban Design department, for the “gargantuan effort” she undertook to work with residents and seek their input. “Because of that collaboration, people support NewZO across the city,” Shephard said.

A first reading of NewZO and zoning map will be held at City Council July 2, with a second reading scheduled July 18.