A REMARKABLE MEMOIR by a former Savannah-Chatham cop has become the hottest local read of the summer.

Intriguingly, Grogan makes the case that Lovett was not only far from the most corrupt entity in local law enforcement, but that Lovett was basically railroaded by higher-ups.

He also puts forth a theory, backed with numbers, about why Savannah’s violent crime rate has skyrocketed over the past few years, since Lovett’s conviction. 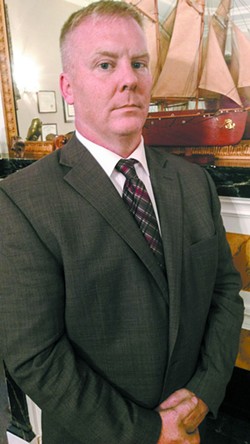 Kevin Grogan is a former SCMPD cop and Iraq War veteran. He is no longer in the law enforcement field.

The capitalization in the subtitle, “EXPOsed,” is a reference to the Expanded Patrol Operation team Grogan was a member of for most of 2006.

Known on the street for their bright yellow shirts and rapid response, EXPO made a name for itself with its combination of aggressive crimefighting tactics and the ability of its street-savvy officers to use their own discretion on the scene.

For example, EXPO officers might overlook a low-level drug offense or victimless crime in order to gain the trust of a community member who might later give them information helpful in apprehending a homicide suspect or drug kingpin.

“The Yellow Shirts established a hard but fair reputation during our brief existence,” Grogan writes. “It was known on the street that if EXPO had a reason to stop, the stop happened. But if the subject wasn’t wanted and wasn’t up to anything, the subject would be on his way shortly.”

With chapter titles like “Remember the Alamo, Motherfucker,” and “Smell The Gun, Leave the Crossandwich,” Grogan brings a cop’s typical dark, gritty sense of humor to the page. The book is available on Amazon and locally at E Shaver Booksellers, The Book Lady, and True Grits on River Street.

While his tale has many of the stock components of any police story—the nicknames, the camaraderie, the disdain for bureaucracy—what sets it apart is the skillful use of details and specificity.

Grogan doesn’t just recount an incident of chasing down a suspect, he’ll tell you on what lane and what cross street the foot race happened.

(Indeed, ever since reading the book I’ve wanted to go on a tour of the spots mentioned—which I suppose might be the biggest thumbs-up a reviewer could give.)

EXPO, Grogan writes, operated to great effect directly under then-Interim Chief Willie Lovett. But then the team was suddenly shut down by new Chief Michael Berkow—perhaps because it was too effective and made everyone else look bad.

Grogan says EXPO’s drug interdiction duties were transferred to the Counter Narcotics Team, who Grogan paints as a clique of prima donnas who regularly claim credit for arrests they don’t make.

Grogan writes about EXPO team leader Sgt. Greg Capers, who right after being named Supervisor of the Year was reprimanded for not arresting a young man for having a small amount of marijuana:

“When I say small amount, it was barely enough for a stingy joint,” Grogan writes. “The kid was scared shitless and was not the target of the Operation, so Capers rubs out the weed and tells the kid to go home and be good to his mother. And for reasons none of us will ever understand, the Captain called Capers on the carpet and reprimanded him for dereliction of duty.”

Grogan says that in 2014, in the wake of various local and national controversies, including the unrest in Ferguson, Missouri, SCMPD begins moving away from aggressively policing violent crime and becomes gradually more and more political, and therefore less effective.

• There was an immediate 24 percent decrease in homicides in the year that EXPO was in existence.

The real mission statement of the book, however, comes when Grogan writes that “It is no secret that money talks and there are few places that I am aware of where it speaks louder than Savannah, Georgia, where justice is whatever you can afford.”

Even the cover of the book spotlights the stark difference between what the author calls “the two Savannahs”—black and white, rich and poor.

Whether it’s the selective outrage when a white person is murdered vs. an African American, or a police captain’s son caught with hard narcotics, or the massive and largely unaddressed poverty throughout the crime-ridden neighborhoods Grogan patrolled, the author has a keen grasp of the societal dynamics which make true justice particularly difficult to attain in Savannah.

In the end, the system itself is screwed from the top down. No episode shines more light on this than Grogan’s tale of his run-ins with Chatham County District Attorney Meg Heap, who he paints as largely ineffective and driven by politics.

In a particularly scathing passage in part about recent allegations against Alderman Tony Thomas, Grogan writes:

“Meg Heap became a master of deferring decisions to Grand Juries under the guise of remaining ‘impartial’ ... I truly believe that Meg Heap would rather be viewed by the public as incompetent than to be on the wrong side of a political battle.”

Grogan also tells of his own DUI arrest which ended his law enforcement career.

While never shying away from responsibility for his actions, Grogan recounts the Kafkaesque experience of District Attorney Heap wanting him to testify as a witness against numerous homicide suspects, while also saying that Grogan, a U.S. Army veteran of Iraq, was no longer qualified to be a cop.

“It seems, therefore, that the District Attorney still thought I was a credible witness despite having accused me of being a felonious liar,” he writes.

The fact that so much of what Grogan writes about is very recent history in Savannah—to this day the stuff of news reports and newspaper columns—makes it a wild ride indeed, and a particularly gripping read.