IF YOU are reading this, it means we have survived. The roar of vintage sportscars racing around Hutchinson Island may still be ringing in our ears, but we’ve made it through an epic weekend of festivals, parades, and other happenings in downtown Savannah.

I’m writing this on the eve of the perfect storm of events the weekend of Oct. 25-27, while conditions are still normal. However, a flurry of headlines warning of downtown street closures has the city on edge.

Our preoccupation with parking and traffic illustrates the extent to which we view our world through our windshields. Complaining about closed streets and reduced on-street parking opportunities also distracts us from what’s at the center of this story: A weekend overflowing with diverse events is an indicator of a city with a vibrant culture. Susan Broker — director of the City of Savannah Office of Special Events, Film, and Tourism — has made this case in interviews as Mega Weekend™ approaches. 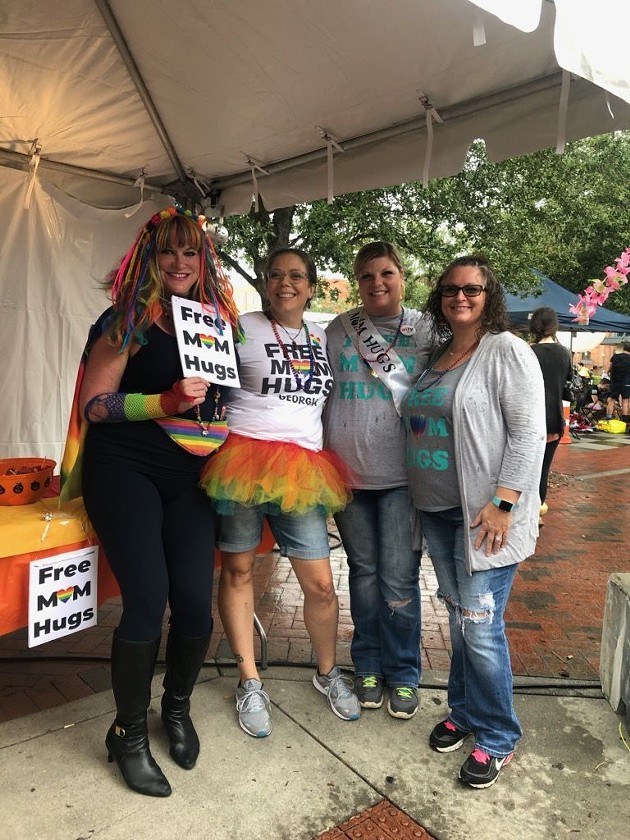 Free Mom Hugs were at Pride as part of Savannah Mega Weekend.

“They’re all homegrown events. This is something I really want to convey to people,” Broker told WSAV.

She is correct. With only a few exceptions, the staggering array of festivities happening during the weekend of Oct. 25-27 are all organized by and for local folks.

This is cause for celebration amidst the increasingly popular refrain that downtown is now the sole domain of tourists.

I love downtown Savannah and lived in various locations north of Gaston Street for a decade, but I must admit these days I spend most of my life between Habersham Village and Forsyth Park.

I should also confess that I myself wrote a letter to Broker way back in the early ‘90s, fretting about downtown becoming too touristy.

Nonetheless, the great Event-alypse of 2019 proves that downtown can still be seen as the heart of the city in the minds of residents.

What forces conspired to cause the Savannah State University homecoming parade, Pride, the Jewish food festival, and multiple other events to be scheduled over single weekend. Social media is alive with speculation/ Scientists will probably be studying the phenomenon for decades, but I suspect multiple factors are involved.

First, it’s a bye week for a popular college football team that wears red and black. (For Bulldog fans who are in withdrawal, I’m happy to tell you another Georgia team with red and black uniforms is in action. Your undefeated Valdosta State University Blazers, reigning Division II national champions, square off against North Greenville University).

Next, as the tropics remain active later into hurricane season, many organizers are selecting event dates accordingly to lessen the probability of costly cancellations. And it’s the weekend before Halloween.

Finally, as someone told me, don’t look for answers. Simply accept that it’s the busiest weekend of the season in Savannah.

Each of this weekend’s events has a distinct appeal. Yet with so many events happening in close proximity at the same time, an additional dimension comes into play, which will make them more pleasurable for attendees than each event would otherwise be on its own.

While much maligned by some, the multiple street closures and expanded no parking zones will create more room for people of all ages and abilities to relax and enjoy the festivities in comfort and safety.

I realize that some of the most vocal critics of these measures are attendees themselves, who are wondering how they will get to the events and where they will park. But if they plan ahead, once they arrive, their experience will be all the better because of the closures and restrictions.

Standing in the street to watch a performance or simply have a conversation with an acquaintance are atypical activities today, but for most of our city’s history these were quite normal things to do. They’ve become rarities as we’ve ceded much of the civic realm to cars. We are able to fully inhabit our city’s public spaces only in fleeting instances when streets are closed.

For instance, walking down the middle of Drayton Street during Picnic in the Park is positively thrilling. Joining in with the convivial crowds marching north on Drayton to their favorite viewing spots before the parade is one of my favorite parts of St. Patrick’s Day.

In fact, I think we should stop using the phrase street closure altogether. Truly, they aren’t closed. They are open to people.

I hope everyone has a good time downtown this weekend. I hope they will become aware of how fun and freeing it is to move around the most beautiful city in the United States — without fear of speeding traffic. And I hope they get used to it and demand more of the same.