Each edition of The Vinyl Say features a different local musician, with the interviews taking place at Graveface Records & Curiosities. All we have is a store full of albums to draw from; no gig or album to promote, and no pre-planned talking points. The idea is simple - walk around a record store and talk about albums, influences, and all things music.

Jason Bible is no doubt known best for his long stint as singer, songwriter, and band leader for The Train Wrecks—perhaps the hardest working and longest running Americana act in Savannah. They’ve put out album after album, done gig after gig, and show no signs of stopping. He’s also a prolific solo artist and studio owner.

Where do you start when you come in here?

Today I started in the back and worked my way in the front.

We walk along towards the back of Graceface, next to the left wall of records.

What are you into right now?

You know, in the car most of the time satellite radio stays on. Tom Petty Radio, or Lithium, or comedy shows. After shows, I put on a lot of comedy because I don’t really want to crank music. But at home, I think the last record I actually sat and listened to is one from Phosphorescent. It’s a live record and it sounded great, man.

Nice! Do you have a lot of vinyl?

Yeah, I’ve got quite a bit. My grandmother, when she passed away, I inherited a bunch of Waylon, Willie, Hank Williams, Roger Miller, that sort of thing.

All of the classic country stuff sounds so good on vinyl.

Yeah, it’s like Waylon’s guitar was designed for vinyl. His voice, too. And my son had a friend over and I put on Robert Johnson to see what their reactions would be. They were digging it.

My father-in-law passed away a few years back, and we got his record collection passed on to us. My wife went through it, and he had a fantastic collection. The Stones, The Who—plus he had some really great comedy albums. Richard Pryor, and stuff that they probably made 5,000 of and that’s it. That comedy stuff is pretty fun to listen to, because you’re so used to watching that in front of you.

Yeah, I think that’s why comedy podcasts are doing so well. It’s the same idea of a different medium for humor. I feel like I always go to that stuff when I need to not listen to music for a while [laughs]. Are you the same way?

Oh, yeah. After my show last night I watched John Wick III. I think 300 people were killed [laughs]. It was like, are you kidding me? How many people are going to get shot in the head? Yeah, sometimes I’ll watch a ridiculous movie just to turn my brain off.

Growing up, did you listen to a lot of records and go to record stores?

Yeah, there was a place in Dallas/Irving called Forever Young Records. It was a place where they had the Bob Dylan movie Renaldo and Clara on VHS, and they wouldn’t let me and my buddy dub a copy of it. It was one of the only places I can remember in that area that had vinyl, actually.

At one point I had a crate of almost every Dylan record I could find, and a bunch of Guthrie stuff, and some Nick Drake stuff. And then a relationship went bad and she kept the crate [laughs]. There was some Cat Stevens, and Richie Havens—all kinds of good stuff in there. I think her dad kept it more so than she did. I took kind of a hit, until my grandmother’s stuff.

So there was a lot of Dylan growing up?

Yeah. And I remember the first time I heard Springsteen’s Born In The USA was with my grandmother in her living room. I also remember hearing Neil Diamond’s Coming To America, and that was really exuberant. My grandmother had this old turntable with an 8-track and cassette adapter, and it had three disco balls on the top. You’d turn the switch on, and it’d make the whole living room a dance party.

The first 45 I listened to, which my mom told me I was obsessed with, was Oak Ridge Boys’ “Elvira.” That was my first memory of vinyl. But vinyl is a commitment—it’s a piece of art, and it takes up space. It’s not as passive as just having files. Like, if you want to listen to track 3 you have to actually get up.

Have you ever gone to a record store and bought something just based on the cover? I feel like a lot more people do that than you’d even realize.

Yeah, absolutely. I think the first record I bought like that wasn’t until Ben Harper’s Fight For Your Mind. I saw the fire on that cover and thought, “Who is this guy?” I went to see him, it was 300 people. I bought a ticket and subsequently the album.

My wife bought a Ween record because of the artwork. Speaking of Ween, let’s look for that one.

We walk towards the middle of the store where the Ween records are located.

We listened to that a while back—it’s one of her bands, and she turned me on to them. We also bought the Houndmouth record recently. Dave Cobb produced that one. As far as first records go, that’s a pretty great step out.

You mentioned Tom Petty earlier. Are you a big Petty guy?

Yeah, my buddy sent me the She’s The One soundtrack on vinyl actually. That’s got a lot of good songs on it.

“Angel Dream” is one of my favorites.

Do you want to go look at some Petty records?

We walk towards the Tom Petty section, but we never make it there and instead land at Portishead.

This is a band that a friend of mine turned me on to. She’d just paint and listen to Portishead. Or hardcore punk if she wanted to get crazy [laughs].

Stuff like Nirvana, I’ve never heard on vinyl so I’m not sure how it translates.

I think I’ve maybe heard In Utero on vinyl and I thought it sounded really, really good. That's more of my wheelhouse when it comes to the Nirvana stuff.

The making of that record was intense. They went through some shit, man. I remember [Steve] Albini talking in an interview about using a strobe light for Grohl as a click track. He’s just got a strobe light by the drum kit keeping time [laughs].

Let’s talk about Tom Petty! What’s your favorite record of his?

Well, firstly—look at how much he fought the industry, man.

Oh, man. Harder than anyone, maybe.

I think a lot of people in the radio industry weren’t very happy with that record [laughs].

Oh, yeah! He lays it out pretty bluntly. 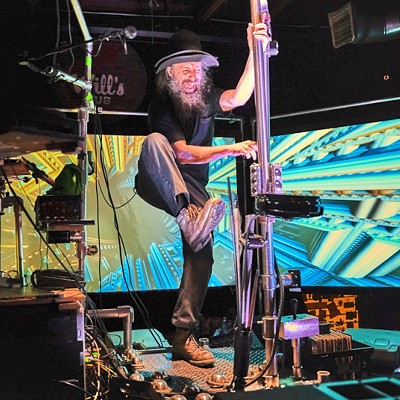