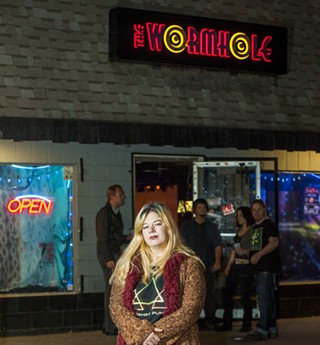 That consistent bass rumble might as well be in his living room, he says. The windows rattle. It drowns out the TV.

Emanating from the bowels of the cinderblock nightclub, the sound waves travel across Bull and the Sav-a-Lot parking lot, around the little square Boyz II Men Barber Shop and directly into a stretch of Victorian homes on 39th.

"With that parking lot, there's no buffer," says Clausi. "It comes straight across, bounces off a house and disperses throughout that area. And just kind of swirls all night long."

When Amy Stafford leased the building and opened the Wormhole in 2009, the neighborhood, which had always been designated mixed-use, welcomed the arrival.

"Bull Street has been a local business corridor for a long time," Clausi explains. "And I've been in that neighborhood for 15 years. I remember when the Starland First Friday events started going on. For a decade and a half, we've been doing all we could to pull in the arts and music, and keep the clubs and businesses functioning."

For a long time, Clausi took it upon himself to walk over to the Wormhole and speak to Stafford personally — on behalf, he says, of his fellow neighbors. To this day, he considers her a friend.

He suggested ways of cutting down the bass. "That was all we wanted," he explains. "That's it. That's all we still want."

Clausi went online and researched insulation material for Stafford, and offered to help install it himself.

"She would send text messages and warn us, 'it's going to be loud for a little bit.' We'd be tolerant and understanding because she said she had ordered this insulation."

Stafford explains what happened next. "He sent us a link to some sound products. But I was advised that those are not soundproofing products; they're more sound-conditioning. Then we put in some sound tiles, but that didn't help with the sound escaping," she says.

Stafford started keeping the Wormhole's front door shut; that bottled up the sound and stopped the first round of complaints.

Near the end of 2012, however, things took a turn for the worse. The neighbors started up with the angry calls again. Sometimes they called when there were no bands playing.

"I wouldn't be surprised if somebody called when there was noise out front," says Dare Dukes, a musician who lives with his wife and their small children down 39th, east of Louis Clausi's house.

"Because I definitely have heard nights when there's a crowd of folks outside, or who had spilled into the parking lot, that were just having a time and making a lot of noise," Dukes says.

"I lived in New York City for a long time, and I would say this is pretty bad. And the other thing is the spillout, especially since they changed the smoking laws. There's a lot of people hanging out outside and smoking. That can get really bad, especially if the show is big."

In the wee hours, the Bull Street business district can get pretty quiet, the only sounds coming from the occasional passing car.

And the Wormhole Bar.

Dukes, like Clausi, strenuously supports the idea of a thriving mixed-use neighborhood. "I've had this impression, too, when I've heard about neighbors complaining about noise: Who are these assholes who hate rock 'n' roll and want to go to bed early? And that's not the case here. The neighborhood actually wants that kind of stuff. Well, I don't know if I'm speaking for everybody but I know my household does. And other people on the block," Dukes says.

"We don't want to bother them," Stafford declares. "But we do have to make some money, so I just started reserving the space for 'featured events.' And if it was a band that just had a 30, 40 minute set, playing at 9 or 10 o'clock and then done...

"We tried having a decibel policy, but any decibels didn't seem to matter. They would still call."

Savannah's "Noise Control" code, ordinance 9-2034, forbids a reading of more than 50 decibels in a residential area between 7 p.m. and 7 a.m.

Entertainment establishments have a more stringent standard, which is that no noise should be audible from beyond the property.

"I work at night, and I'd be coming home at 12:30 and immediately started getting text messages: 'Call the police. The Wormhole issue is out of hand.' I started resenting everybody!" Clausi says.

"The police would come to the house, and they would look at us and talk to us in a belittling fashion. Like, 'What, are you kidding me? You're calling us and bothering us to come here? Why don't you just hang blankets on your windows?' They would listen to the sound for five or 10 minutes and say 'Oh, that's no big deal,'" he continues.

"This went on for three years. They got really nasty. So finally, I printed out the City noise ordinance. And they kept telling me 'no, no, as long as it's below these decibel readings.'"

It wasn't until he left an angry message for Mayor Edna Jackson, Clausi says, that the City took action.

"I got really mad, and I left a message at the mayor's office about 2 o'clock in the morning. I just said 'I want to make you aware of what is happening. And hopefully, something can be done about it, because this is very unfair. And all we want is quiet so that we can sleep throughout the night,'" he says.

"That's all. I didn't file anything."

On Dec. 6, 2012 — not terribly long after Clausi's call to the mayor — a city inspector stood at the eastern edge of the Sav-a-Lot parking lot and checked the Wormhole's decibel level, which measured more than 70 db.

Stafford was informed of the violation and ordered to answer in Recorder's Court.

Nerves frayed. Tempers flared. In 2013, Stafford says, one of the complainants — it wasn't Louis Clausi — threatened, via text, to shut her down.

"That's when I told them they would have to speak to my lawyer after that," she relates. "In the face of that, I could no longer work with them directly. So they really brought that to the table. I was trying to work with them before that. When we tried everything we could do, we realized that we were going to have to bring a lawyer into the situation."

Stafford's statement, of course, only fanned the flames. "That was it," Clausi said. "She stopped talking to us. That came out of nowhere."

Says Bret Bell, the City's Public Information Officer: "We sat down with the owner of the business and encouraged them to take action to ensure that they're not in violation of the noise ordinance. Other businesses have done that successfully. And to date, they have not taken action.

"We want the business to thrive, but we want them to be in compliance with the law," Bell concludes.

Offers Dukes: "It's unfortunate that the City has such a bad reputation in terms of how it regulates anything," he says. "That when anybody hears the news about this thing, it immediately becomes about how fucked up the City is. And the facts about any particular case get lost. "

So what, Stafford wonders, is she supposed to do?

"The main issue is that the code does not provide any parameters. I mean, one part of the code does. But then they have another part, another code that says you cannot have any sound across your property line at all," she says.

"So why do they have this code that defines decibels and beats, and then you have this one that says 'no sound'? How am I going to aspire to a particular parameter if there isn't any? So that it meets requirements, and so that it works for the neighbors?"

Interestingly, there have been no reported complaints from residents on DeSoto Street, which runs behind the Wormhole.

The Savannah-Chatham Homeless Authority, its neighbor to the north, hasn't made a peep. Nor have the proprietors of Cha-Del liquors, which adjoins the Wormhole's south side.

The frequent (low) frequencies seem to travel directly across Bull Street, through the grocery store lot and into the homes — and comfort zones — of the 39th Street residents.

"I think maybe it could be a sound anomaly that's hitting their houses just right, when it's not hitting anybody else's house," Stafford believes.

If so, that's what science refers to as a wormhole.

"It's not like excessive bass, either," she adds. "It's some bass that's carrying from the kick drum and stuff; it's not like we're just playing really bassy music."

She rejected Clausi's next idea — a wall in front of the club, along the Bull Street edge of her property line.

"The City's not too fond of random walls," Stafford chuckles.

"They wouldn't even let me finish my little wooden fence. I put it in as the beginning of Phase Two, a nice patio that might help block sound. I asked them if there was anything I needed and they said no, as long as it's behind your property line. So my friend started putting it in, on his vacation," she says.

"If the city would let me," Clausi says, "I'd go out to the curb and I'd build the friggin' wall."

The City was not finished with Stafford and her fence. "They finally said OK, you can keep the fence you have but you have to lower it a foot," she says. "But my friend was off vacation and had to go back to work. So it just stayed there, a half-finished fence."

At any rate, she's not so sure that building a sound-absorbing wall would solve the problem. "It wouldn't make any sense for me to spend $10,000 I don't have on a leased property," she says. "For a business that doesn't make a lot of money anyway."

Stafford was fined $500 last April; her current case was given a continuance this week in Recorder's Court.

Like Stafford, Clausi says he wants a peaceful resolution, something that will satisfy all the parties involved.

"We're not against any of it," he says. "We just don't want to have to deal with it until 3 o'clock in the morning. A consistent sound. And we really just mean well. We don't want to see anybody put out of business. We are all ardent supporters of local business and local music."