Theatre with a rough edge

A little rough around the edges, Unvarnished Theater Company seeks to make viewers think with their productions, the first of which is Will Eno’s “The Realistic Joneses.” It debuted in 2012 and stars neighboring couples who learn about each other and the secrets they share.

The production debuts Fri., Oct. 11 at the Hen House, a perfectly intimate space for the company.

Morris stars as Jennifer Jones, and Schroeder directs the cast. We spoke with them last week. 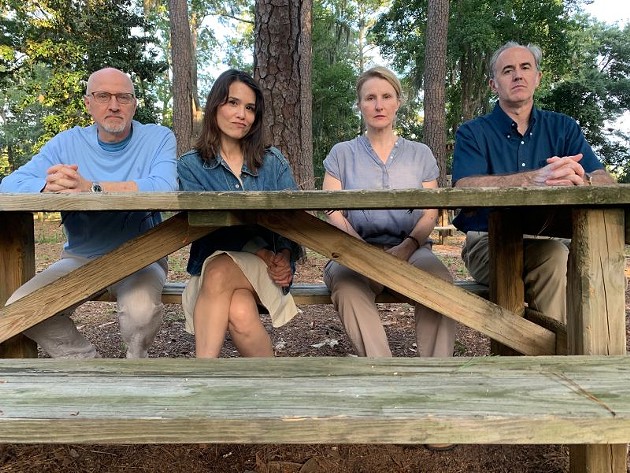 How did Unvarnished Theater Company come to be?

Schroeder: Jennefer and I have known aeach other for quite a few years. Our husbands actually got jobs together at SCAD the same year. I remember him coming home and saying to me, years ago, “I met a guy whose wife is an Equity actress!” And I was like, “What? Really? Here?”

Morris: My husband came home and said the same thing to me!

Can you explain what being an Equity actor means?

Morris: The Actors’ Equity Association is a stage actors’ professional union. So in New York or L.A. or Chicago, if you’re working as a professional actor, you’re probably either Equity or on the track to becoming Equity.

Schroeder: You can’t just join Equity, either—you have to earn it. You have to pay your dues. When we moved here, there were no Equity theaters. Neither of us could actually work here at all. We’d have to leave to work.

Schroeder: Here’s my theory: it’s such a beautiful city and it’s warm throughout the year, and people understandably want to be on their boats. People with money aren’t inclined as much to go to the theater here because of the environment. If you look at places like Cleveland and New York, it’s freezing. “What can we do? Let’s go sit in a warm room.”

Morris: I think the culture has to demand it, and that’s why we’re rising up because I think Savannah is ready for more of a substantial theater scene. And not to discount the community theaters, because they really serve to promote the purpose. There’s some really great work at the community theater level, too.

Schroeder: Savannah Repertory Theatre was the first one in town, and now we’re here. I think we’re all going to support each other. I think people were afraid it wouldn’t be supported by the community, and I think it will. We’re interested in using non-Equity actors in our productions as well, so some cross-over with the other theatres would be really great for us.

Morris: We’re all veins that lead into the same artery. I think that with us emerging, the effort is growing, and the more energy you put towards something, the more energy it’s going to have.

Schroeder: We have a very similar taste in theatre, which I think is such a great advantage. It makes us a more specific company. We’re not doing just any play.

How would you describe that taste?

Schroeder: The fact that we are unvarnished, and that’s the name of our company—there’s a reason behind that. It’s unvarnished as in you’re going to get a splinter. It’s rough and dangerous and truthful. We’re choosing plays that aren’t necessarily easy. We want you to leave here a little less comfortable than when you came in.

Morris: We have enough mindless sources of entertainment. Why not go spend two hours and watch a show about human beings actually exploring what the human experience is like? In a live setting, where anything can happen? And you can’t ignore it. And if you ignore it, then you’re not telling the truth. 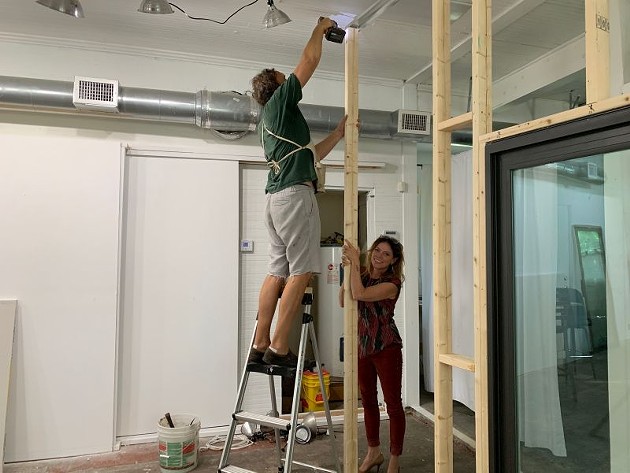 Meg Kelly Schroeder with her husband, Todd, building out the set.

Your first production is Will Eno’s “The Realistic Joneses.” How did you choose it?

Schroeder: Jeneffer and I are exchanging scripts, and she gave me this. We had a group of actors that we were going to start working with, which was Craig Anton, Kimiko Gelman, and John Prosky. We didn’t know who would be acting. Jeneffer gave me this, and it was as if it just fell into our laps. It is so beyond perfect for these actors, including the fact that Jeneffer and John’s names in the play are Jennifer and John.

Have either of you performed anything by Eno before?

Morris: I’ve read several things by him and have always loved his wacky, absurdist view on life. But when I read this, it just floored me. It’s the first play I’ve ever read that I laughed out loud while I was reading it. The language is funny. It’s so specific, and that’s what a lot of our rehearsal time is—just realizing, trust the language.

Schroeder: It’s all written out. We don’t really need to do anything but just read it. I don’t need to be here!

Meg, what’s your process for directing?

Schroeder: I like to be very organic. I say, “I don’t know where we’re going to go today, and let’s take the time to find it. Instead of having an idea of where we want to get, let’s see where we end up.”

Morris: I think the best director, in my experience, creates an environment where the actors feel free to explore in any direction, and Meg personifies that. It’s really been such a joy, and I trust her completely to steer this production, and she’s just...man, she’s on it.

Schroeder: Thank you! I’m very honored to hear you say that. It’s also because I do genuinely enter the space with no idea what we’re going to do right now, but to watch it and see where it is going, and where should it be going if it’s not sparking?

Morris: Isn’t that how art is? You start with a lump of clay, and it reveals itself to you as you work with it.

Tell me about the choice to perform at Hen House, a more experimental space, rather than a traditional theater setting.

Schroeder: Craig [Anton] drove by, and we just kind of looked at it and thought, “This is actually exactly what we’re looking for.” We are unvarnished and we want to be grassroots, ground-up, to make our process of building the company the same process we were just talking about with the play. Not, “Hey, we’re puttin’ on a show!”

Morris: That’s really challenging. We’re dealing with perhaps audience expectations and money—everything costs money. So just making art and making theatre that you want to share, it does cost money, and it can be a little scary and daunting to think about, where is this money coming from?

Schroeder: But we have been really good with budgeting, though. What we have done is taken that restriction and worked it to our advantage. For example, taking this space, which was a lot cheaper but is perfect for us.

What’s next for you after this production?

Schroeder: We’re focu sing on this, but we have two contenders that we’re trying to nail down before this show opens so we can say, “Come to our next show!” But it’s hard, because we’re really absorbed in this. There are a lot of things we want to consider in regard to our next show. We’re going to keep rolling. We know if we can throw this up and make it sparkle, we can do it again. We need a benefactor—I’ll repeat that, we need a benefactor. [laughs]

Morris: We’ve had some generous help so far, but we’re not nonprofit yet, and we haven’t formed into an LLC. We were advised by Equity to just put up a show under their Members Project Code, which is basically a bunch of Equity actors getting together and saying, “Hey, we want to do a show for us.” And we’ll see how it goes, see what the process is, and then take the next step.

Schroeder: We’re very determined. It’s happening, it’s just, what’s next? Each one will be an adventure.