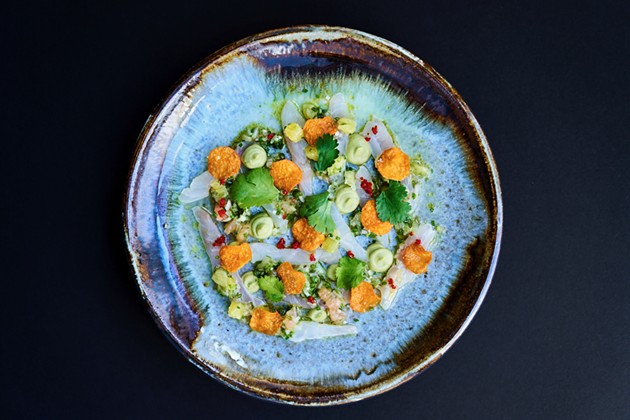 John Park
The Black Bass, served at Savannah's newly opened Common Thread.
Food is the thread that connects us all − no matter the language, background, or origin of each person. Sharing a meal or breaking bread is the simplest way to share culture and heritage. No matter where you are in the world, the dinner table is a communal space that binds anyone who sits at it. Common Thread, Savannah’s long-awaited new culinary haven, was built with this idea in mind − to support and connect locals. Local diners, local farms, local fisherman, local procurers, and local chefs. In the last week of January, Common Thread officially opened its doors and is bringing exemplary farm-focused food to our growing epicurean array. There is nothing common about Common Thread. It is one of those restaurants that will define Savannah’s culinary scene for the future and will leave upon our city its stamp of greatness. FARM Bluffton is the sister restaurant to Common Thread, and shares some of the same ideas regarding the kitchen’s approach to food. Housed within a beautiful Victorian home that previously operated as an antique store, the team behind Common Thread knew they wanted to bring something different to Savannah. Although the much-awaited restaurant took time, especially in light of the pandemic shutdown, the massive undertaking would not have happened without the expert staff that supports the kitchen. Executive Chef Brandon Carter, who previously served as Executive Chef of FARM, was first on the team.
click to enlarge 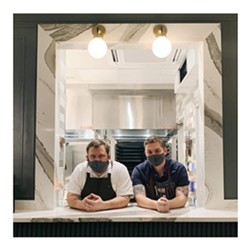 John Park
Common Thread chefs Brandon Carter and John Benhase.
“We wanted to have the same sensibilities that we have at FARM, in regard to how we prepare our food, and source locally, and source seasonally, and things like that. We wanted to make sure that we did not lose that. That is part of the reason behind the name Common Thread,” Chef Carter told me. As the doors became closer to opening, Chef Carter brought on a well-known and established local foodsmith, Co-Executive Chef John Benhase. They both have their own culinary perspectives, and together they have created something extraordinary. Chef Carter draws influence from his Southern roots, with some flavors of Italy as its distinctive cuisine first drew him to cooking. Chef Benhase focuses on seafood, Israeli cuisine, and African food. By working together, bringing their own unique sensibilities, and hashing through each menu item, the result is a collaborative menu that is fully balanced yet unique. Both culinary experts were gracious enough to take a few minutes out of their bustling opening week to sing the melodies of their menu to me. One thing was clear − they have put their hearts into the restaurant and menu. When you ask a chef what dish stands out, and they answer “I love them all,” you know the meal is going to be delicious.
click to enlarge 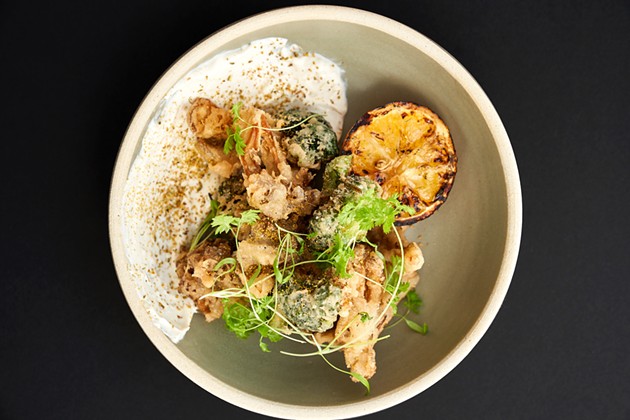 John Park
The Fritto Misto, served at Savannah's newly opened Common Thread.
Vertu Farms, Russo’s Seafood, and Bootleg Farms are just some of the many local purveyors that supply the ingredients for this new farmer-focused venue. Common Thread is partnered with Grow Food Carolina, a nonprofit distribution organization for small farmers and growers in the Lowcountry. “They source from 30 farms. They send us a list of what farm has what. It is a great way for little farms that just make yogurt or just have pecans, can send their inventory to Grow Food Carolina and they have the means to distribute it,” Chef Benhase explained. The opening menu will change as the season and availability of ingredients change. Benhase elaborated, “That is how we cook too. We don’t call farmers and say do you have ‘this’ − we see what they have and build our menu off what the best thing is.” After speaking with both chefs, I was inspired to eat my way through the menu. You will not find sections of starters, salads, and mains − for good reason. From top to bottom the menu runs from light to rich; but more importantly you can close your eyes, randomly select any dish, and experience food that is as delicious as your first and last plate.
click to enlarge 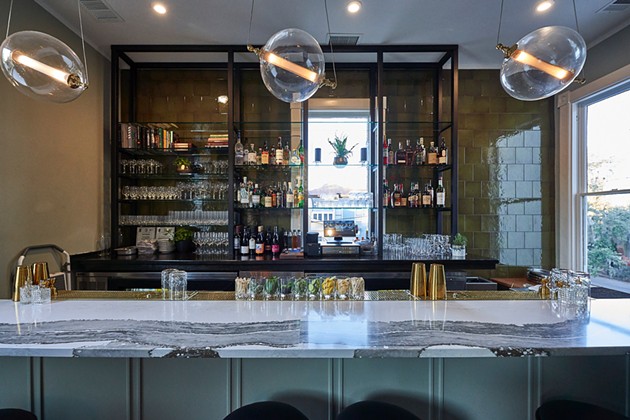 John Park
The tasteful bar at Common Thread.
“We don’t have... ‘here are your appetizers, here are your entrees.’ It is more of a progression. Forcing people into a tasting menu is not necessarily something that is approachable to everyone. We wanted to have the sensibility and structure of a tasting menu, but kind of a choose-your-own-adventure version of that,” Chef Benhase explained. At the top of the opening menu are oysters, smoked mackerel, and black bass; then the menu carries you through a labyrinth of luscious savory plates and ends with the star of the show, the 28-day in-house dry-aged prime-strip (Chef Benhase made it clear that the day count varies by cut). I am of the opinion that no matter what I recommend or no matter what you decide to order, you will love the dish. So instead of hashing out the entire menu, although I tried almost all of it, I am going to give you the dishes that everyone has told me they loved (including our server) and that for me were unforgettable. Benhase’s take is this: “For me, the dishes I get most excited about are the simplest ones that surprise people. The smoked mackerel, the collards, the octopus, these are dishes that are three or four ingredients. They are really simple on paper, but layer-wise people are like, ‘I did not know this could happen.’” The Marinated Leeks is one of those dishes that you will remember about your meal for years to come. Simply put, I have never eaten leeks that tasted this good. A heavy char is placed on the alliums. They are paired with breadcrumbs for crunch, spicy white anchovy, sherry vinegar, and white romesco. Mackerel is a fish that everyone throws back or chops up for chum. Many do not recognize the potential in the small white fish, but Common Thread does. A quick cold smoke is given to the delicate fish. Texture comes from the house-made ‘everything spice crunch’ that peppers the top. For the fat that balances the lean white fish, a creamy concoction of buttermilk, celery root, and labneh (yogurt) sits as a base. After this week, I expect to see more mackerel-forward dishes on menus across town.
click to enlarge 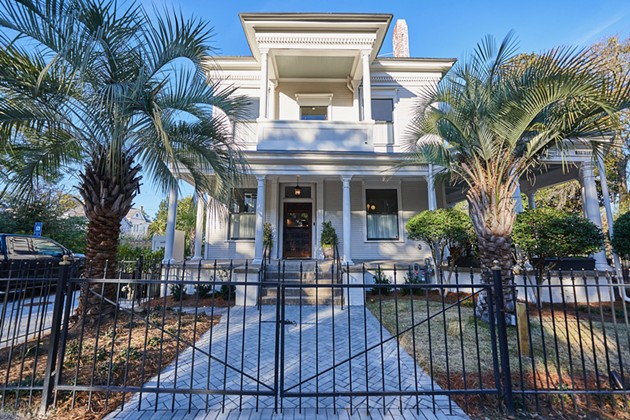 John Park
Common Thread is located within a charmingly refurbished Victorian house that was previously an antique store.
The Gnudi is the dish that was recommended by almost everyone I spoke to about Common Thread. “What is gnudi?” you may be asking. I am here to tell you, gnudi are little pillows of ricotta that taste as though they descended from the heavens. If God slept on a pillow, it would be made of these little bites of joy. Similar to gnocchi, gnudi is made with cheese in lieu of starch, and the result is a delicate dumpling of delight. It is yet another simple dish, layered only with garlic, basil, cauliflower, pecorino cheese, and breadcrumbs, but it tastes anything but simple. You must order the Shrimp. No this is not shrimp and grits, as has been done tenfold in our town. This is Common’s take on shrimp and grits, which will likely make you forsake the old ways of gloopy grits topped with overseasoned shrimp. This dish is comprised of shrimp and collard greens. Tender and complexly flavored collard greens sit as the base of this composed dish, and are finished with the best shrimp in the world − sweet Georgia coastal shrimp, which are surprisingly hard to find in local Savannah restaurants. The collards are inspired by multiple cultures: West African, American South, and Peruvian. You will take a bite and instantly wonder what ingredient it is that you can’t quite place. It’s the peanut sauce that is layered with fermented peppers and a bunch of other magical foodstuffs. It is a dish that will proudly make you forget your grandmother’s vinegar-coated collard greens. You will be glad that you experienced something you have eaten a thousand times in a completely new way. On their own the collards are vegan, as with many of the dishes featured at Common Thread. Whether you are vegetarian, vegan, or pescatarian, you can still have a communal experience with your friends by eating most of the same dishes that are already included on the menu. The chefs took the time to create a standalone menu just for that so guests do not have to order a couple of side dishes to make up a meal. I learned a lot just by talking with Chef Carter and Chef Benhase and eating their food. Chef Carter left me with this: “We might make our food look like this or we might use this ingredient, but it is all the same. Everybody has their rice-and-bean dish, everybody has the ham that they smoke, everybody has their style of bacon. The way that we use chilis might feel like one way in Korea and like another in Italy. It is anchovies in Italy and brine shrimp in Korea, but they do the same thing. They are giving you that same sensation. For me that is one of the most interesting things about the way we approach food. We make the world a little bit smaller. It is the Common Thread.” Common Thread: 122 E. 37th Street, Savannah. See commonthreadsavannah.com to learn more, and visit epicuropedia.com to read more by Lindy Moody.