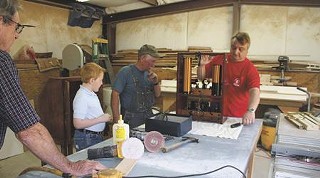 For those who don't know, the theremin - sort of an antenna that you wave your hands around - is the musical instrument that makes the eery, spooky sound made famous by cheesy horror movie soundtracks in the 1950s.

(Contrary to popular opinion, the Beach Boys did not use a theremin on "Good Vibrations"; that's something called a tannerin.)

However, it doesn't always have to sound cheesy. Philip Neidlinger, who's been playing the offbeat instrument for about four years now, will play his homemade theremin this Friday night at the Ships of the Sea Museum on MLK Boulevard, in a free "Museum in the Moonlight" concert.

We spoke to Philip last week about his unique instrument and what people can expect at his concert.

Other than that thing that makes the spooky sounds in horror flicks, how would you best describe a theremin?

Philip Neidlinger: It's essentially a maple box with vacuum tubes and electronic components in it. A theremin is essentially a radio transmitter. It has two or three transmitter oscillators in it that mix to produce audio. You control the tone and pitch, and your body proximity to it is basically the pitch and the volume.

When Lev Theremin came here from Russia in the late ‘20s, people had never seen or heard anything like it. Women fainted in the audience because they thought angels were singing. I won't say my playing sounds like that (laughs).

How did you first get into the theremin?

Philip Neidlinger: By accident. I'm an electronics engineer by profession and avocation. I always had an artistic side to my personality too.

About four years ago I heard something about it and the idea got into my head that this would be a great thing to do. An architect in town, Kevin Rose, runs Elevated Basement Studios. He said, "I've got one of these if you want to borrow it."

So he loaned me a spraypainted silver basic Moog Etherwave. That's kind of  a starter instrument. I borrowed that for three months and my wife bought me one of my own the following Christmas.

Everybody wants to get an RCA original manufactured in the 1920s. That's kind of like a Stradivarius. Unfortunately only about 500 were manufactured and even less are in existence.

But the one you're playing this weekend at the Museum is one you built yourself.

Philip Neidlinger: For about a year and a half I set upon building one, which is probably the hardest thing I've ever done. This is not some buy-it-from-Radio-Shack-and-put-it-together kind of kit. These things don't work when you turn 'em on for the first time.

I reached a point I was going to throw the whole thing in the river. People I was corresponding with said no, don't do that, just keep at it. I finally got it to work and everybody gave me encouragement.

Why is it so difficult to make one?

Philip Neidlinger: Building  a tube theremin from scratch is not an easy task. The troubleshooting part is madly, insanely difficult. If you're not technically inclined you're not going to make it.

People ask, "would you build one for me?" And I say absolutely not. You couldn't give me enough money to make another one of these. The only reason I did this is because I loved it.

Philip Neidlinger: You don't touch it - you wave your arms around it and look funny.

So how does one go about learning how to play it well?

It's got a steep learning curve. A lot of people start out and drop it because it takes a long time to get proficient at it.

Any beginning thereminist needs some headphones if he wants to stay married; the squeals and squawks get old real fast.

What can people expect from your set at the Museum?

Philip Neidlinger: Classical, big band, jazz, '40s stuff, Johnny Mercer, Henry Mancini. I'm trying to talk my wife into accompanying me on keyboard to "Memories" from Cats. I can really kick butt on that one.