These anxious times: working parents reflect on life during pandemic

AS A PARENT, you want nothing more than to spend quality time with your child.

As it is, quality moments are hard to come by—going to work every day to meet your family’s financial needs takes up enough of the day, so it’s hard to squeeze much of anything else in.

But what happens when a pandemic forces you to stay home with your kids? There’s a terrifying reality for many right now, as companies worldwide are being forced to furlough or lay off employees; many of whom are working parents.

For those who are lucky enough to remain employed, though, the day-to-day rituals of life have been completely dismantled in favor of something much more...unpredictable.

Companies are constantly changing the way they do business to compensate for either a remote structure or—if you’re an essential business—the lack of face-to-face interaction.

Whether you’re having to set up shop at home or readjust your daily work schedule, parents are having to navigate a challenging situation in which they need to care for their kids and also do their job.

Being the (remotely) working parent of an 8-month-old, I’d been thinking a lot about how other parents must be feeling right now. My wife is the manager of a clothing store downtown, and has had to adjust to a completely different schedule that finds her overseeing hundreds of online orders as opposed to the normal public operations.

Angel Ratcliffe and her daughter

We’re certainly not in the worst of predicaments in this regard, though. Kids who would normally be in school are at home, and many require their parents’ assistance with assignments since everything is being done virtually. Keeping up with that demand is a hurdle like no other.

Angel Ratcliffe, a supervisor at Anthropologie, says she thought it’d be easier than it has been to adjust to the routine changes of her unpredictable new schedule and that of her daughter Gabby, a senior in high school.

“I don’t know if it’s my natural human nature to resist change and be stubborn a little bit. And the milestones are so short-lived. You make these milestones at home, and then each time you start over with a brand new game plan.”

George Seaborough, his wife and their daughter

The challenge of creating a new routine, especially with kids in the mix, is trying to sync up with the people in your life and figuring out how to solidify a plan. George Seaborough, executive director of Chatham-Savannah Citizen Advocacy, says that he’d begun to plan out his work schedule weekly before he realized that his wife, youth pastor Tyneise, made a similar schedule that was hour by hour.

“She was able to sit down and craft out how she was planning her day. She laid her day out hour by hour. My weeks were not matching up with her hours. How could we make sense of that?” Seaborough says. “So I adapted to her hourly schedule.”

That schedule, which Seaborough says is always fluctuating, revolves around the couple’s 4-year-old daughter and her needs.

“It wasn’t until I saw the wisdom of my wife—where I noticed that she was breaking her days down hourly—that I was able to see what wasn’t working for me. What I do now is I go to sleep a bit later, and I wake up earlier. Because I know that in this block of time in the morning, I have the opportunity to read, write, or whatever I need to do,” he says.

“If I know that my wife has a Zoom meeting for two hours in the afternoon, that I have to be responsible for my daughter. So, we worked it out.” 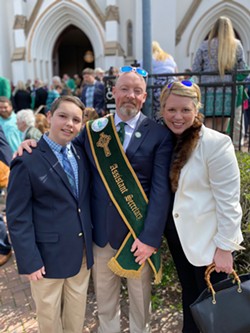 Hannah Byrne, her husband, and son

Hannah Byrne, who works for a global technology company, is navigating much different circumstances. She’s been working remotely for years, aside from regular work travel. Her husband is still going to work full time, and their 12-year-old son is doing his schooling from home. Seventh grade, Byrne says, is relatively self-sufficient. For them, not much has changed.

“I’m actually working more hours than normal, because now everybody wants to video chat constantly. So we’re, like, living for the weekends,” she says.

Perhaps the biggest adjustment for Byrne and her family was getting school situated for their son.

“In his grade, they all have Chrome books, so they set up the computers. They’ve opened the cameras up now so they can do video chats, and they’ve had to open up some sites that were blocked. So the school had to adjust to that for the first week or two, but it’s been relatively smooth since then,” she says.

Ratcliffe says that her daughter is facing the most uncertainty when it comes to her graduation, which remains up in the air as schools are no longer allowed to have large gatherings for the foreseeable future. Senior prom was cancelled as well.

“These big, monumental senior events have been cancelled,” she says. “Our whole family has been looking forward to her commencement. She’s the only grandchild on both sides. We’ve been waiting for these moments, and then they just vanish in thin air.”

Helping your child with school can be a challenge under normal circumstances, but with everything so fluid it can be extra difficult to keep up.

Jen Jenkins and Markus Kuhlmann have been navigating that and so much more over the past month. Jenkins is the owner of Foxy Loxy Cafe, Coffee Fox, Henny Penny, and Fox & Fig, which are staples in the local community and have been for years. Her partner, Kuhlmann, works at the stores and is best known as a prominent local musician in groups like Clouds & Satellites and Waits & Co.

On March 17, Kuhlmann and the couple’s son Ison made a trip up to Sumter for spring break. They planned to spend a few days with Kuhlmann’s 82-year-old mother. Things changed quickly, though, and both parents decided their best course of action was to “divide and conquer,” as they both say. Kuhlmann remains in Sumter with Ison and his mother, and Jenkins is in Savannah navigating the very challenging landscape that her businesses are in at the moment.

“From the get go, I said, ‘I’ll take Ison and we’ll play it by ear.’ We knew that Jen had to have full attention on the businesses, because at the beginning everything was so fluid. We didn’t know if we were going to be closed down. It took a couple of weeks for the last shoes to drop on all of that,” Kuhlmann says.

“We knew that this would be a better situation for Ison, and that I’d have to be homeschooling. Which I’m doing right now. Jen doesn’t feel the pressure of the family stuff, and she can focus on the businesses.”

Jenkins says she’s taking it week by week in terms of navigating things at home with her dedicated staff and the several Foxy locations.

“Each week has been kind of a different phase of this whole thing, you know? All of it never knowing when it’s going to end or what it looks like,” she says.

“When things started escalating, Markus and I were both sort of paralyzed in trying to make a decision. We had no idea if it was going to be two weeks or two months of them being up there. No idea. And if they stayed much longer and Markus was working in the cafe, there’s the concern about his 82-year-old mother. What if they didn’t use that window of time where they both felt confident that they didn’t have the virus and that it was okay to go up there?”

Jenkins is one of many small business owners who’ve had difficulty navigating the curbside and delivery world we’re living in, as well as trying to get loans to keep things moving. She says it wouldn’t have been as easy to focus her attention on that if Kuhlmann had stayed in Savannah with their son. Now, the two are able to take on their respective tasks and try to keep the boat afloat, as it were.

“I know people that are in much more challenging situations, so I feel grateful that he’s able to focus on Ison and his mom. And that completely frees me up to troubleshoot what needs to happen with these businesses.”

No matter your situation, these stressful times may feel insurmountable as a parent. They’re certainly unprecedented.

Kuhlmann and Jenkins both feel they did what was best for their family, despite struggling with being apart.

“I feel an existensial stress for Jen and what she’s going through,” Kuhlmann says. “It could have been stressful for us as a family if we were still all together in the pressure cooker. And what if one of us got sick?”

“I feel relieved that I’m able to do what is appropriate to support my team, but of course I miss my baby boy,” Jenkins adds.

For parents working remotely who’ve have never had to do it before, Byrne says it’s all about creating a discipline and making yourself feel like you’re actually going to work.

“Get up, take a shower, and get dressed. Even if you’re just going to your kitchen table, you have to do all of that stuff. I’ve been working from home on and off for probably 20 years—you have to stay on that schedule or you’ll get nothing done,” she says.

“Also, to be able to walk away from the work and close the door is key. Even if you can just pick it up and put it in another room, to make a mental transition, that’s very important. You don’t have that drive home from work anymore. You have to be able to stop.”

Being a working parent means you’re constantly going and going, which can be mentally challenging in times like this. When you do need to turn it off, as Byrne wisely advises, it’s important to find ways to decompress and take your mind off of the world around you.

Seaborough and his family are taking more walks these days, and are trying to stay as active as possible. He even got his daughter a kite so she can learn how to fly one.

“We also have two blueberry bushes in the backyard, so we’ve been tending to that,” he says, adding that walking the neighborhood even gave him the chance to plan on a bike ride with a neighbor.

Jenkins says that work tends to take her mind off of what’s happening, and helps her stay productive at a time when that’s more important than ever. Kuhlmann adds that he listens to podcasts at night to decompress.

Things like this might have been taken for granted before, but they matter signifcantly now when it comes to staying grounded and sane in these anxious times.

“I also try not to watch the news. I find that when I do for more than 30 minutes, I get really stressed and anxious,” Byrne adds. “I try to really limit my news intake.”

Situations like this ultimately give us the chance to appreciate the things we took for granted as parents and as people.

“In comparison to the way things used to be, this has allowed me a lot more quality time with my family. Being able to sink my teeth in deeper. I’m actually available during the day to be there in the moment while things are happening, like with school or things like that. I don’t have to wait to hear about it when I come home from work,” Ratcliffe adds.

“That has been the bright side of all of this.”