I'M A huge fan of all forms of creative expression, and I can think of no better summer activity than to spend an afternoon in air-conditioned museum meditation.

But there’s something about encountering the extraordinary in mundane places—a splash of color on a building, a blocky tag on a railcar, a freakish sculpture rising out of the concrete—that gets me giddier than half an Adderall and a shot of tequila.

Unlike delicate canvases and painstaking installations that warrant quiet, curated spaces, public art might be coarser in both content and component. It isn’t necessarily beholden to strict hours or rules about its viewers wearing shoes. It has to be a little tougher, a little rougher, not only to endure the elements, but to reach out and grab the attention of someone who might not have been looking for it in the first place.

With public art, we can come as we are, and if it’s doing its job right, it feels like it belongs to us all.

The recent collaboration between SeeSAW public art pioneer Matt Hebermehl and wordsmith Jason Armstrong Beck felt like such a gift when it took over 212 Broughton Street last week.

For seven nights, passersby were drawn to a colored glow emanating from the empty building, its windows covered in orange paint except for four circular viewing points. (Who needs drugs when there are psychedelic portholes to a poetic peepshow?)

Inside, a newly-crafted bit of relatable wisdom from Beck’s literary persona, Bison Jack, was projected onto the back wall after the sun went down. Outside, a crowd would magnetize on the same patch of sidewalk, three or four people at a time, looking, chatting, lounging on the planters, simply being.

Usually, a group of scruffy weirdos milling around in front of an empty storefront might arouse suspicion. But with proper permitting and support from Jeanne Svendson-Campbell of Galerie 124, these random congregants became holy witnesses, connected by shared observation and the occasional hosanna.

An excerpt from Evening No. 5: “I wish I had paid more attention in physics class and chemistry, because after all these years of love affairs and short-lived relationships, it appears that when it comes to matters of the heart, it is rocket science after all.”

Bison Jack and SeeSAW have more mural platitudes in store, and in the meantime, other parts of the city are blooming with unconventional art—literally. On the façade of Judge Realty on Abercorn, artist Jamie Bourgeois is currently cultivating an outdoor design completely out of live Spanish moss, a brilliant and beautiful use of organic materials that celebrates Savannah’s natural resources (and also what might happen if Banksy gave birth to a Chia Pet?)

Along with inspiration and celebration, art that is accessible to all can bring even more to our collective table: Under the right circumstances, public art also has the power to prompt healing and redemption.

If that sounds eye-rollingly dramatic, consider what Jerome Meadows just did for Portsmouth, New Hampshire.

Yes, I mean our Jerome Meadows, of Indigo Sky Community Gallery, Blank Page Poetry and other projects that have provoked Savannah’s conscience and consciousness. You may have heard he’s Kind of Big Deal in the international art world; if you haven’t, let the fact that he won the $1.2 million contract in New England over four other prominent finalists speak for itself.

When Portsmouth city workers dug into a layer of crumbling coffins while replacing sewer lines in 2003, excavations revealed the remains of an estimated 200 enslaved people interred there in the 17th century. The site had always been talked about, and city leaders finally decided to honor these long-forgotten souls in a way that speaks to history honestly and with dignity.

Jerome’s Portsmouth African Burying Ground Memorial Park is a somber yet serene testament to the loss and pain of a people’s forced separation from their homeland. Hundreds turned out for the plaza’s dedication a few weeks ago as the centuries-old bones were reburied and laid to rest.

Throughout the almost-eight year creative process, Jerome says he couldn’t walk down the street in Portsmouth without someone stopping to shake his hand for unshrouding the town’s slave history and giving it a permanent place in its mainstream narrative.

“When a community acknowledges how valuable it is, it’s the pinnacle of what the ‘public’ in public art is all about,” he says, adding that the project has given the area’s small black community and its supporters a sense of closure and reconciliation.

The irony, of course, is that a similar project is what brought Jerome to Savannah: Back in 1997, the D.C.-based artist was commissioned for a public art park at Yamacraw Village, where Chief Tomochichi first met General Oglethorpe and a public housing project sits literally yards away from Savannah’s former slave markets. But by the time the final memorial was installed a decade later, Jerome’s original vision had been reduced by mismanaged budgets and apathetic leadership.

Today, the thoughtfully-planned square on Bay and Fahm Streets is largely ignored by guidebooks and tour buses, its fountain empty, its bronze statues surrounded by broken glass.

Jerome’s not a grudge holder, but he remains disturbed at how attempts to unify Savannah’s historic narrative to include slavery never quite seem to take. He’s particularly frustrated with the 2002 African-American Monument on River Street, which depicts a black family in modern dress supposedly reunited after Emancipation (see story about Juneteeth on page 16.)

While a quote from Maya Angelou alludes to the horror of the Middle Passage, the sculpture does nothing to acknowledge the human trafficking that went on near that very spot as it glosses over its consequences, still reverberating in the cobblestones and concrete.

In Jerome’s educated opinion, “the symbolic use of public art in this case is a failure.”

So what did Portsmouth get right that Savannah hasn’t yet? Sure, we could talk all day about the differences between a small Yankee hamlet of mostly upper-middle class white folk and a busy Southern port city ten times as large and far more racially balanced.

But like Savannah, Portsmouth once tiptoed around its unpleasant history. It now has an accessible, durable medium to recognize the people dragged away from their families and treated like animals so that the country we all share now could thrive.

By embracing the bones of the abused and forgotten, the town has caught up with the present and can face its future with integrity.

“It was something we should know, and now that we do, we’re speaking of it in the way should have all along,” says Jerome of the changed cultural dynamic.

Public art can help us reach back and acknowledge the hard, ugly parts of Savannah’s history and has the potential to make space for more compassionate solutions to the issues rooted in what Jerome calls our “strong, tender racial dynamic.”

What it would look like and how we’d raise the money and cut through the red tape are details best left to the artists and the administrators, but the conversation must continue, no matter how awkward.

In fact, it reminds me of another one of Bison Jack’s truisms: 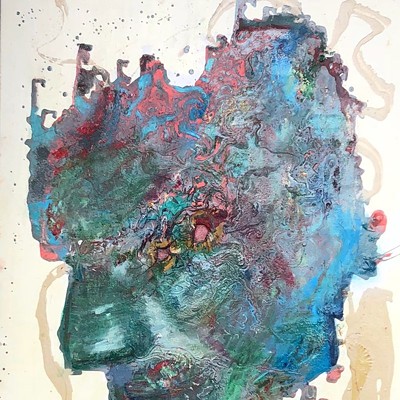