Thirty years of excellence and celebration

THIS year marks the 30th anniversary of the Savannah Black Heritage Festival.

The festival was a brainchild of Westley Wallace Law, a civil rights activist and president of the Savannah chapter of the NAACP, and his legacy will be honored through this year’s festivities.

“He worked with the City of Savannah, who has been supportive of the festival since its beginning,” shares festival organizer Shirley James.

The City of Savannah partnered with Savannah State University to create a jam-packed lineup of black culture, art, and heritage.

One highlight of the festival is the Bright Star Children’s Touring Theatre, coming to town from Asheville, North Carolina.

“They have programs and performances that cover all kinds of topics,” says James. “What we really like is that their performances are not only informative, but they’re character-building. We take them into the schools with programs that are appropriate for kindergarten through 12th grade, and we also offer them in the general community.”

Bright Star will perform two programs for the public: “Black History Hall of Fame” on Feb. 11 and 14, and “George Washington Carver and Friends” on Feb. 13 and 15.

Another favorite event is the Cleo Parker Robinson Dance Ensemble performance on Feb. 6.

“She loves that interaction, and we love to provide that opportunity for our aspiring dancers,” says James.

The marquee event of the festival is Grand Festival Day, an annual favorite, on Feb. 9.

“We started incorporating a health fair into the Grand Festival Day maybe 12 or 13 years ago,” recalls James, “to address some of the disparities in health, especially as they affect the black American community, but also Savannah.”

The kickoff event for Grand Festival Day is a Historic Health Walk. Presented by Walk Georgia, the walk will trace the postal route that W.W. Law took.

“W.W. Law was a U.S. Postal employee, and there’s a whole story behind that because of his work in civil rights,” says James. “He had the credentials to teach, but in those days, if you were active in the NAACP or other civil rights groups, that was held against you.”

Another way W.W. Law will be honored during the festival is at a panel discussion at the Jepson Center on Feb. 13. The speakers include a historian, a preservationist, an aesthete, and a community activist.

“Mr. Law was instrumental in that he was a lover of fine arts and he was into historic preservation and preserving African American history ere in the city,” says James. “For the panel, we have identified four persons who have had personal relationships and interactions with Mr. Law in the areas he’s left his legacy.”

The festival will pay homage to another late local legend, the jazz musician Ben Tucker, at the annual Future of Jazz concert on Feb. 12.

“The young people that Teddy Adams locates throughout the Southeast are such talented young people,” says James. “He finds them from middle school all through grad school. He has connections being in the world of jazz and music, and he puts these calls out and they come.”

A new feature of the festival is the Sons of Mystro on Feb. 15. 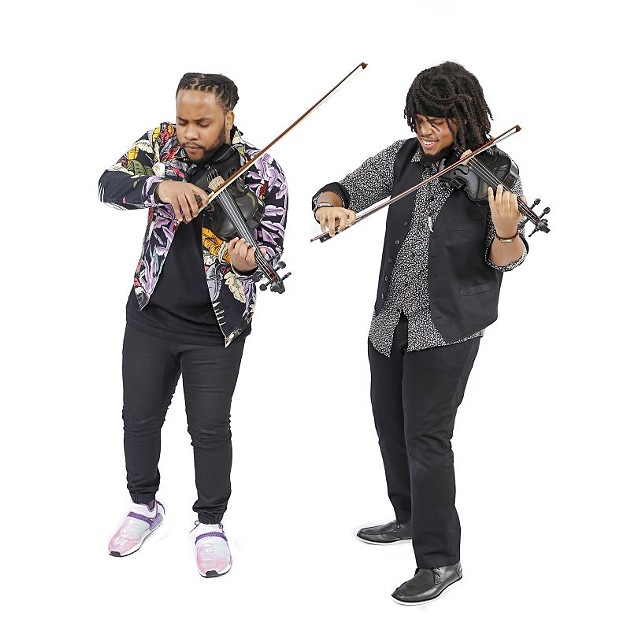 Typically, the big concert at the festival comes at the end of the Grand Festival Day, but the Sons of Mystro are performing separately.

“They’re two young men—brothers in their 20s—classically trained violinists, but they not only play classical music but they play reggae and American pop songs,” says James. “It’s so awesome that we’re able to present them for our young people. They’ve been on Saturday Night at the Apollo and the Steve Harvey Show.”

As racism and intolerance still pervade our society, festivals like the Savannah Black Heritage Festival serve an important purpose in bringing people together.

“Over the past 30 years, we’ve shown how black heritage and culture have influenced art,” says James. “That’s our mission. Since I’ve been working with the festival, we try to take various activities into various parts of the city and use different venues so we can bring people together. Maybe if they focus on what’s being presented—on the art, on the dance, on the music—everybody’s kind of in the same place. Maybe subliminally, they’re getting a message [of acceptance] across. That’s my hope.”

Expressing 30 Years of Diversity, Black Heritage and Culture through Art

When: Sun., Feb. 10, 5:30 p.m.  Featuring Lamar Campbell and Spirit of Praise. Opening performances by the SSU Wesleyan and Anointed Voices, GSU/Armstrong Gospel choirs, and the Savannah Mass Choir of the GMWA.

When: Fri., Feb. 15, 7:30 p.m.  Price: Free  Sons of Mystro are classically trained violinists who use their instruments to interpret reggae, classics, American pop songs, and their own creations accompanied by beats, a DJ and a guitarist.

When: Sun., Feb. 17, 3 p.m.  Richard Law, Karla Marriott and Tyriq Maxwell will discuss "The Current Political Environment and Its Impact on Artistic Expression."

I Shall Not Be Moved

When: Sun., Feb. 17, 5:30 p.m.  Master storyteller Lillian Grant-Baptist will portray how storytelling, music and folklore have been used as tools of resistance and reconciliation throughout African American history.

In Tune: The Ben Tucker Story

The story of the life of legendary jazz icon and community leader Ben Tucker and the history of jazz in Savannah.

When: Thu., Feb. 21, 5:30 p.m.  A celebration of the dreams, voices and poetry from the Harlem Renaissance. Featuring Lillian Grant-Baptist and the Young Men of Honor.

When: Fri., Feb. 22, 10:30 a.m.  Preserving the legacy of African-Americans who settled along the White Bluff and Coffee Bluff public waterways.