THE COLLECTIVE FACE Theatre Ensemble’s sixth season is off to a star-studded beginning.

“I’ve been wanting to do it for a while, and finally I said, ‘You know what? Nothing risked, nothing gained!’” he says.

With a cast of over 20 actors, plus crew, Kennedy Fine Arts Auditorium is teeming with energy and excitement in the days leading up to opening night. The cast—including Savannah State University graduate Michael Knowles as Jesus, Dan Finn as Judas, and Cecilia Tran Arango as Mary Magdalene—has donned big hair, eyeliner, and studs for the occasion.

“We’ve punked out our version,” says Poole excitedly. “We’ve tried to make it more of an immersive experience this time...it really feels like a high-octane rock concert.”

“It’s one thing to say, ‘Oh, we’re going to do a punk version of Jesus Christ Superstar, but you have to make sense of it. Otherwise, you’re putting on this façade, this icing on the cake when there’s no cake.” he explains. “This is a punk rock concert, but we still have to, at its core, tell the story. It’s about the journeys of these characters—how do they relate to today? Jesus Christ Superstar is a very interesting rock opera and poses the question of, if Jesus lived today, would we recognize him?”

Jesus Christ Superstar shook the theatre scene when it debuted on Broadway in 1971. The retelling of the Christ story had a forward-thinking attitude and many allusions to modern life and pop culture.

“It’s a contemporary spin on the greatest story ever told,” Poole elaborates. “We looked at how it relates and is reminiscent of today’s culture and what’s going on in this world. The social statements made in it are relevant to today, especially things like Black Lives Matter. There were distinctive choices made in our retelling of this story to reference culture right now.”

While Jesus Christ Superstar is a classic and a beloved show, the theatre world at large seems to be particularly drawn to it at this moment in time. NBC has selected Superstar as its next musical event on Easter Sunday 2018, and Regent’s Park Open Air Theatre in London has earned rave reviews and awards for its production. 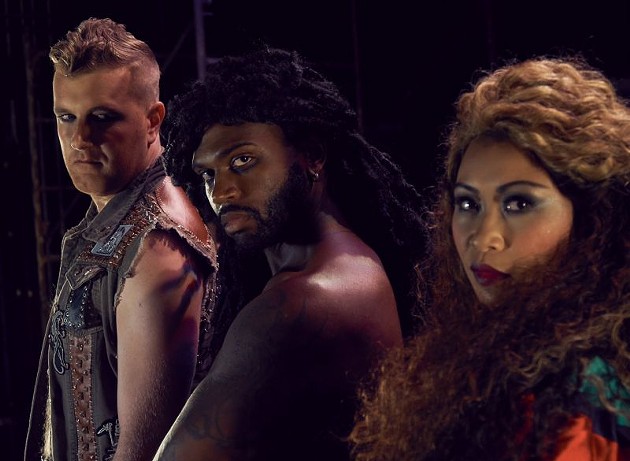 “I think because of the political and social atmosphere that we have created right now when there’s a divide, we’re trying to find events to bring us back together,” Poole muses.

“Just like seeing the catastrophe of Hurricane Harvey right now. We’re kind of a nation divided, but when something as horrific as a hurricane devastating Texas happens, we all join together and put our differences aside and show our humanity. And I think Jesus Christ Superstar shows our humanity in this sort of marginalized society it portrays.”

In Collective Face’s Superstar, the apostles and disciples are the punks, and the priests and decision-makers are “The Man,” functioning at a Big Brother-level of control. There’s even an homage to the band Devo in the way the priests act, robotically and controlling.

The cast and crew have thrown themselves into the theme, taking punky selfies for their rock gig-style handbills. Even circumstances that could be viewed as obstacles, like the big Kennedy Fine Arts Auditorium renovation, are working in Collective Face’s favor.

“It’s kind of fitting, it’s under renovation and they haven’t completed the lobby,” Poole explains. “So it’ll be all punked out like the CBGB bathroom! The students are really excited about this. We’re deconstructing the lobby, putting brown paper all over the walls, graffitting them, there’s no ceiling tiles or tiles on the floor. It’s an abandoned building aesthetic. If it works for any show, this is the show it should be for!”

Audiences should arrive ready to rock out, throw glow sticks, and cheer for the stars in the limelight.

“If you want a good time, an experience, but to also be moved, this is the play for you,” Poole attests. “This ain’t no Easter pageant! This is a rock concert. And I have a feeling it’s going to explode.”