‘This is an ultimate all-star troupe’ 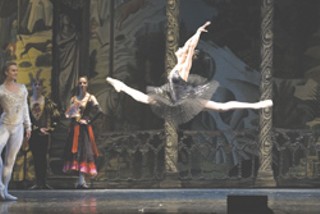 This son of a career Navy officer traveled extensively through the U.S.A. as a child, and once he hitched up in the military himself, wound up living (and serving) throughout Europe and Asia for many years. However, it was Mother Russia which won his heart.

An avid historian by nature, Donnelly (who has resided in Hinesville since 1989) says that when he first visited that fabled land, he had no idea what to expect, but was pleasantly surprised to find the Russian people just as hospitable as the southerners he grew up with.

A congenial and talkative man whose enthusiasm for European culture is palpable, Donnelly relates how —during a lengthy stay in St. Petersburg while organizing a food drive— an epiphany at the famed Hermitage Museum led him on a whim to try and enroll in the Russian Academy of Arts and Sciences, one of the most prestigious such schools in the world.

“I was dragged through the Hermitage by my Russian guides about 20 times, and I hated it, because I was never allowed enough time to really look around any of the 1,492 rooms filled with art,” he says. “But on my last visit, I was left completely alone, and the enormity of their collection simply overwhelmed me. It changed my life.”

Though he was denied admission repeatedly, either for being American, or not speaking Russian, or for being “too old,” after four attempts, the school relented.

“They said anybody that crazy or stupid could try, but insisted I’d fail immediately.”

It turns out Donnelly didn’t fail. In fact, he flourished.

“The Academy was founded in 1757, and I am the only American who has ever graduated from there. They might not let another one in after me! (laughs)”

During his time as a student, he was “besieged” by Russian artists desperate to show their work in the U.S., and eventually started his own art dealership here, focusing on Russian work. Soon, adds Donnelly, he was similarly set upon by collectors who wanted to meet these artists in person and see their fabled environment up close. Thus began his Hinesville-based M & M Art Travel agency, a successful and unique business specializing in museum and art-based educational tours of Russia.

In 1998, while leading a tour of 14 ballet enthusiasts, he made a fateful connection which would one day allow him to obtain the exclusive license to represent the famed Hermitage Ballet in North America.

“Americans like Russian ballet. That’s all there is to it. We started with the Bolshoi, but went to the Hermitage as well. Even though we’d bought the tickets and flown 4,000 miles, they said it was sold out and didn’t want to let us in. Luckily, before it became a nasty altercation, I identified myself as being from the Academy of Fine Arts, and they were so impressed by the way I handled the situation that I wound up being invited to be on their board of directors. I immediately accepted.”

When I remark that it sounds as though that was handled in an unusual way, Donnelly laughs. “Everything is a little strange and unusual in Russia! That’s what I love about it.”

Before long, Donnelly’s company had struck a deal naming it the sole official Hermitage Theater ticket outlet for the U.S. market, meaning that if you want to travel to St. Petersburg to see their world-renowned ballet company, and you want to buy your ticket in advance, he’s your man.

This has proved so popular, that Donnelly has spent the last seven years trying to bring the Hermitage Ballet to our shores for a brief tour, and his dream has now become a reality.

This Friday at 7:30 pm, an expanded version of that troupe makes their U.S. debut at the Johnny Mercer Theater. It’s a night of firsts: their first time in America; their first show of the tour; and Dr. Donnelly’s first try at concert promotion. To hear him tell it, this is an historic occasion in other ways as well.

“I’m satisfied that the Hermitage ballet we’re bringing to the U.S. is the strongest group of dancers from that country that have ever appeared in the states before,” he says with pride. “It’s taken seven years of planning and one full year of work to make this happen.”

Donnelly says he insisted that for this U.S. trip the company perform the same show he witnessed on his first visit to their theater: The Gala Special, a revue of sorts designed to spotlight key moments from the finest ballets.

“You might say we’re doing the entire classical repertoire of the Russian Imperial Ballet in one show,” he says. “The Bolshoi and Mariinski Theaters do it as well, but with only six dancers. We have 37, so it’s marvelous to behold. There’s no way anyone here would have ever seen anything quite like this, unless they were lucky enough to catch the one week annually when the Hermitage does it.”

Donnelly says the scope is only enhanced by the quality of the performers.

“This is an ultimate all-star troupe. If you Google our soloists, you’ll find they have two or three thousand pages online devoted to each of them. We’ve also borrowed three or four dancers from both the Bolshoi, the Mariinski and the Mussorgsky Opera House for this tour.”

“All the dancers are graduates of the Vaganova School - where all the ballet theaters and companies in the world come to choose from the best of the best. Their dancers enter school at ten, and don’t leave until they’re 17. They’re in classes each day from eight in the morning till nine at night. They do six hours of ballet a day, and only go home for one weekend during that entire time.”

Why, I ask, would the school even bother to let them go home at all — if for only one weekend out of seven years?

“Because they’re merciful,” he laughs.

Dr. Donnelly says fans of great ballet who have never had the opportunity to witness talents on the caliber of Baryshnikov, Diaghilev and Fokine will be amazed.

“The Atlanta Ballet is good. The Charlotte Ballet is good, too. The New York Ballet is slightly higher. But compared to what we’re bringing here, in baseball terminology, I’d tend to classify them all as Double or Triple A teams. The Hermitage is like the big leagues.”

The Hermitage Russian Ballet makes their first-ever U.S. appearance this Friday at 7:30 pm in the Johnny Mercer Theater. Tickets from $40 - $65, available through www.etix.com, or call the Civic Center Box Office at 651-6556.