THOMAS CLAXTON is a veteran of the local music scene, for sure. But that’s not his only calling card.

It’s been a landmark couple of years for Claxton. A couple of weeks ago he won an Indie Music Channel Award for Best Rock Artist in Los Angeles.

Last year he released a new album, Age of Propaganda, featuring an all-star collection of sidemen.

Claxton chalks up his recent success to an open-minded but always pragmatic attitude toward the music business.

One of his key pieces of advice: There’s no need to make a dramatic announcement that you’re leaving Savannah forever to go make it in the big city. 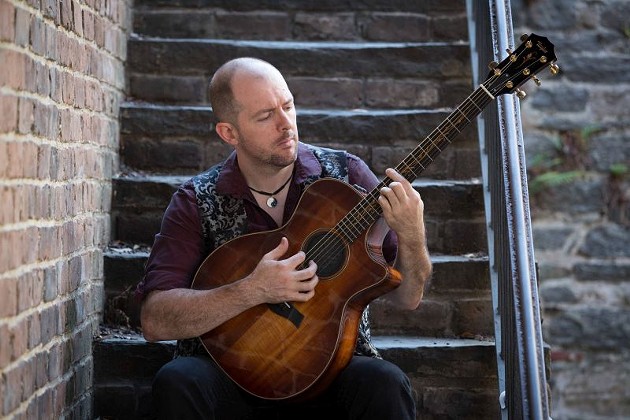 “It’s not the 1970s anymore. Back in the day you had the big three: Nashville, New York, and LA. If you didn’t go to those places, you’d never accomplish anything,” Claxton muses.

“But these days, you click a button and somebody sees you in Japan in five seconds. So why the hell do you need to leave permanently? Go to the markets, make your face valuable in those markets, and get your ass back home,” he laughs.

For Claxton, this approach has worked both in getting his name out there in the larger markets, but also in maintaining a tight-knit business and creative support team in Savannah.

Age of Propaganda, for example, relies on a combination of home-grown players and recording talent, and industry talent he met while on his frequent networking trips to larger markets.

The record is produced by Eric Winbush of Dadd’s Productions, “one of the few real sound engineers in this town,” Claxton says. “Eric is based in Savannah, but he does a lot outside of Savannah. He’s the real deal. Phil Hadaway is another one.”

While this record is straight-up rock ‘n’ roll, the instrumentation and style are full, layered, and eclectic.

Guest artists on Age of Propaganda include Mario Cipollina, formerly the number-two man in Huey Lewis and The News. “Mario is the sweetest guy you ever talked to in your life. He agreed to record bass tracks on the album,” Claxton says.

When Claxton was in LA, he met the iconic guitarist Michael Hampton of P-Funk, who guest-stars on the album.

“If you listen to P-Funk, you realize Michael’s not the type of musician who goes home and writes a chart. He really plays what he feels,” Claxton says.

On keys is Eric Frampton, who has worked with The B-52s, Mother’s Finest, and many more.

Other stellar musicians on Age of Propaganda include UK session/touring guitarist Phil Hilborne, who has worked with Brian May of Queen, and Wayne Livingston, well-known NYC session guitarist.

Claxton traces many connections that came to fruition on Age of Propaganda back to a short-lived but crucial tour he did as backup singer with Chuck Negron, formerly of Three Dog Night.

“I thought that 2008 arena tour was immediately going to be the start of something big. But then it crashed and I found myself playing back on River Street. So I was like, alright, I’ve got to do something.”

The difference came when he maximized some of the contacts he made during that time.

“It didn’t last too long, but I met some people on that tour. I’ve always been of the mind that if you get a great opportunity, you might never get it again, so capitalize on every angle you get,” Claxton says.

A key acquaintance from that tour was the owner of Artist Relations in Nashville, who ended up inviting Claxton to a company event where he met many of the creative minds who would help him make Age of Propaganda.

While the album is professionally produced and has an array of top-shelf musicianship, the hallmark is Claxton’s distinctive, powerful voice – a throwback to the time of real rock ‘n’ roll frontmen.

Claxton’s remarkable vocal range is at least partially because he’s a natural baritone who was trained as a tenor.

The classically trained singer studies under Ron Anderson now, “one of the top two vocal coaches in LA,” he says. “Ron has taught Chris Cornell, Axl Rose, Alicia Keys, Bjork, and many others. Ron and I met a little while back and we got together not too long ago. “

Claxton stresses that there’s a difference between a singer and a vocalist.

“Freddy Mercury’s voice, for example, was different than most other voices. His vibrato was actually a lot quicker than most people’s vibrato. Somebody like that can play with your emotions in a song, and that’s why they get where they are.”

The Indie Music Channel Award, for his performance on “The Other Side of You,” is a particular honor for Claxton.

“It’s a worldwide award. You submit to it, and if you get nominated, you go to LA and see if they call your name out. They hold the ceremony at different places each year around LA, and this year it took place at the Grammy Museum,” he says.

In keeping with Claxton’s practical approach, he says it’s a good time for rock ‘n’ roll artists to get their foot in the door.

“Rock isn’t pop or R&B – it’s not at that level of popularity. So it’s not necessarily as cutthroat a category to put your music in,” he says.

“In general, rock ‘n’ roll just doesn’t get the credit it deserves. Think about the last 50 years without rock ‘n’ roll... You can’t!”

One of Claxton’s passions is keeping the real rock history of Savannah alive.

“Savannah has had, especially in rock ‘n’ roll, a kick-ass history for years. But it rarely gets talked about,” he says.

“Five Miles High, Shut Up & Drive, Born, The Rogues, the JoJa Band — they were kicking some serious ass. Those guys tend to get completely ignored these days.”

Claxton says in some ways Savannah can be its own worst enemy with regards to fostering local talent.

“Savannah sometimes seems to have its chosen people, and if you’re not in that circle, you’re not getting much local coverage. I could win a Grammy tomorrow and a lot of people here wouldn’t give a crap,” he laughs. “It’s funny to me, it really is.”

In between trips to LA and various national gigs, you can find Claxton playing solo at The Bayou and The Warehouse.

Catch him this weekend as he plays with his full band The Myth in a show at Coach’s Corner May 17, a benefit for the Alzheimer’s Association’s Dancing Stars of Coastal Georgia. 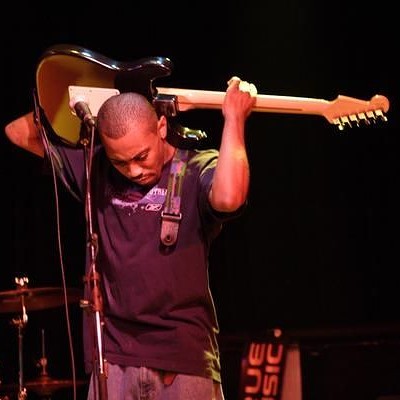