As the dust settled and the full impact of the debacle set in, a different question came to mind: Where are all the local activists when we really need them?


JUST TWO DAYS after the incredibly ugly spectacle of last week’s censure hearing of Alderman Tony Thomas, City Council entered a retreat to come up with a strategic plan for all of Savannah.

There’s no punchline — that’s the joke.

Yes, the same almost cartoonishly argumentative and mutually mistrustful group attempted, with a consultant’s help, to map the course of a city that hasn’t really had a strategic plan since the days of Oglethorpe. 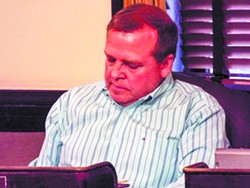 As last week’s censure meeting showed, the fractures existing on the current City Council are much worse than even the most cynical observers among us feared.

In a meeting which was supposed to be about Thomas calling a reporter the C-word the previous weekend and passing out drunk in the DeSoto Hilton this past St. Patrick’s Day, instead the Alderman publicly threatened Mayor DeLoach in Council chambers thusly:

“You need to be very careful, Mr. Mayor.”

Thomas also accused Mayor DeLoach of substance abuse problems of his own, with a bizarre wager that he would take the same drug tests the Mayor would.

If you read a gangster movie script with this scene, you’d say it was too unbelievable to be filmed.

For some reason, Thomas was given an extraordinary amount of time to not only defend himself — which most would agree was his right — but to mount aggressive personal attacks on almost every Council member in attendance, one after the other.

With the conspicuous exception of Alderman Van Johnson, that is. More on that later.

Again like a bad movie script, Thomas — sitting in his usual Council chair and acting as if he, not the Mayor, were running the meeting — went down the line attempting to expose everyone else’s dirty laundry, at a meeting which was supposed to be about his dirty laundry.

The unmistakable subtext: If I’m going down, you’re all going down with me.

And in that effort, I’m afraid Thomas may have actually succeeded.

While few of his individual attacks left a mark —his attempt to portray Alderman Julian Miller as being similarly intoxicated this past St. Patrick’s Day was shot down quickly when Miller said, “You don’t even know how you got to the Hilton that day” — the fact that Thomas was able to hold his own censure hearing hostage proves that the leadership vacuum in City Council is much more profound than most of us originally thought.

In the end, the unanimous 7-0 vote to censure Thomas wasn’t only toothless, it was watered down to the point of meaninglessness.

When Van Johnson showed up conspicuously “late” to the meeting and immediately began trying to defang the censure resolution, the collective cry of “the fix is in” and “Tony’s got something on Van” began to go up in Facebook comment threads all over Chatham County. 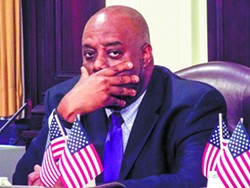 Johnson then began an oddly lawyerly discussion of the clause demanding an apology to the woman reporter, saying Thomas had already done that.

Mayor DeLoach, incredibly, capitulated to both of Johnson’s demands in order to get his vote. You see, the censure must be unanimous to pass.

I have long called for Mayor DeLoach and Council to be more outspoken about the effect Thomas’s antics have had on the Council’s, and the City’s, credibility.

There’s no question in my mind that Mayor DeLoach did the right thing by his constituents in calling for the censure of one Frank Anthony Thomas.

But the best thing would have been for the Mayor to say, “Van, if you want to vote no, then vote no. And you can deal with the consequences of that vote. But we’re not changing a word of this resolution.”

Thomas wasn’t quite done. In another outtake from a bad mafia movie, he would say to Mayor DeLoach: “I want to know who you’re working with.”

A meeting that began as a black eye for Savannah ended up giving Savannah two black eyes.

And amazingly, Thomas may have left his own censure stronger than he went in, thanks in large part to Van Johnson's support.

But as the dust settled and the full impact of the day’s debacle set in, a different question came to my mind:

Where are all the local activists when we really need them?

Here we have Van Johnson, widely rumored to be a likely mayoral candidate in the next election, openly and plainly seeking to minimize the use of the C-word against WTOC’s Georgiaree Godfrey, for reasons which are thus far unfathomable.

While Johnson said Thomas’s use of the word was “dead wrong,” almost in the same breath he excused its use when he said, “We all have bad days,” and “I don’t believe in kicking a man when he’s down.”

We live in an environment where the slightest injudicious use of a word or image brings instant outcry on social media, with instant demands for firing, censure, etc.

This is especially true on the topics of race and gender. And WTOC’s Godfrey happens to be an African American woman.

So to recap: A white Alderman called an African American woman the C-word on tape. A leading local “progressive” Alderman openly sought to minimize it.

And all we hear are crickets from local activists. Many of them, however, did find time this past weekend to attend a rally about the Paris climate accord.

Why aren’t local liberal groups up in arms about such blatant misogyny, right on their doorstep?

Isn’t what Johnson did — not to mention Thomas — sort of, well, Trump-like?

Could it be they are giving Johnson a pass because they see him as most likely getting their support in the next election? Whether against DeLoach or someone else?

If your idea of a “progressive” is someone who not only seeks to excuse a woman being called the C-word, but quashes a demand to apologize to her.....

How progressive is that?