Thomas Wynn and the Believers @The Jinx 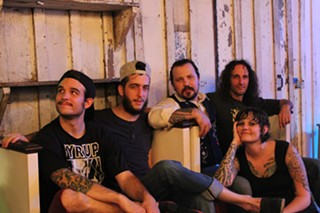 'I've written songs that aren't about me, but y'all haven't heard those,' says Thomas Wynn (center). 'Because I don't feel 'em. They have no conviction.'

He's just 29, but Floridian Thomas Wynn writes, sings and plays guitar as if he'd just stepped out of the studios of Capricorn Records, that great Macon-based nucleus of quality Southern Rock in the early 1970s. He's a young man with an old soul.

Wynn and his band, the Believers, make their third appearance in Savannah June 23 at the Jinx (most recently, they bowled everyone over at the 2014 Stopover). What you’ll hear is blues-based, tuneful and lyrical rock ‘n’ roll, a bit on the rugged-rock side but complex and meaningful in the vein of the Black Crowes, or even the Band (Wynn’s hands-down favorite songwriter, truth be told, is Robbie Robertson).

His songs are unique, his guitar playing smokes, but Thomas Wynn’s secret weapon is his deeply soulful, octave-leaping singing voice. This is a far, far cry from the boring old Marshall Tucker Band, or monotonous Molly Hatchet. The guy will seriously knock your socks off, especially when he runs away in tandem harmony with his kid sister Olivia, who is the band’s other lead singer.

Your dad was the drummer in the great Capricorn Records band Cowboy. Was music, therefore, a natural path for you and Olivia?

Thomas Wynn: We weren't forced or anything, but the door was certainly open to us. Growing up, my dad wasn't just a professional drummer. He'd been a master carpenter and cabinet maker for 45 years as well. So there were a lot of long days at work —we were homeschooled and either hanging out with Mom or playing outside. Music wasn't slammed in our faces every day. It was left up to us.

In this economy, is it an uphill climb trying to make an independent band pay for itself?

Thomas Wynn: I don't know if it'll ever get easier, but that's because it means so much. It's a labor of love. There's always something else to do—and if we didn't want to do it, we just wouldn't, because it is hard. There's lots of things that aren't nearly as stressful, and don't take us away from our families. And perhaps they would provide a better living. But it's a compulsion. It's our love. It's what I think all of us really desire to do. I mean, even if we never get to the point where we're all sitting in high cotton, or high on the hog because of music, I don't think we'll quit playing music.

What inspires you musically? Why do you write the way you do?

Thomas Wynn: Because I've failed so much, I think. Some people would say I'm a glutton for punishment. I assume you're talking about the lyrics—because musically it just, I don't know, happens. Melodies just come, and how can you explain that? I can't. It's just, the wind blows, and hey, I hear it. Lyrically, I'm trying to wrap my head around decisions I've made so that I can make better and wiser ones. And maybe I'll say "you" in the song, but it's more likely that I mean "me." Almost everything is autobiographical, and I'd lie if I said they weren't. I've written songs that aren't about me, but y'all haven't heard those. Because I don't feel 'em. They have no conviction.

Would you say that it's a form of therapy for you, writing out your feelings in a song?

Thomas Wynn: Sure! I can't afford therapy, so this is it. Because I think everyone should be able to talk to someone. And I believe everyone needs to, at some point in their life. Whether or not we choose to, or have the ability to. There's a liquor store down the street from my house that's says "Wine is cheaper than therapy." That's funny. And it's true, I guess, but it's not necessarily the answer.

Do you have a day job?

Thomas Wynn: I put in plantation shutters. You don't have to think too much. I've done construction all my life in various forms. It's good to work with your hands—even though I certainly need my fingers for my other passion. I've been careful; I have them all. Even with a few close run-ins. It's good, and it provides for my family, and it's a blessing to be able to have this, and schedule it as I'd like it. I can come and go as I please, in terms of touring. And that's the kind of thing that's needed. I'll continue to do this until I can't, or am unable to because I'm on the road too much.