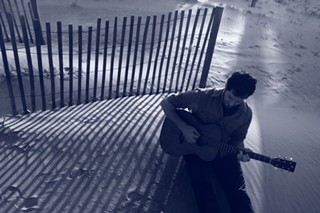 "I've always been obsessed with people who were just married to their instrument and their art form," Todd Murray says, "like Jeff Buckley, Bill Evans, Rufus Wainwright, Joni Mitchell, Bob Dylan. They didn't always need a band to do what they did."

Murray — you know him by his stage name Sincerely, Iris — is explaining why, despite a youthful infatuation with guitar greats like Jimmy Page, and the desire to be part of a rock 'n' roll band, he writes, plays and sings all by his lonesome.

"I always saw myself in a band in the beginning," he adds. "But I had trouble with people committing. I guess I had no other choice."

A Midwesterner who moved to Savannah in 2010, Murray has become a familiar figure on the local acoustic scene. This week, he's releasing his third full-length album, Best Left Free, produced by Brenden Robertson of Love Music and Live Wire Sounds.

"Honestly, I think this is probably the most personal album that I've done," Murray says. "There's a couple of songs that are just made-up stories, like the one about falling in love with a girl at church.

"My girlfriend's father passed away last November, and a couple of the songs reflect on that."

The title tune is a rumination on the nature of love and freedom, featuring Murray's chiming guitars and hypnotic Celtic-style fiddle work from Ricardo Ochoa.

All that stuff's used sparingly; the record's core is Murray's voice and guitar.

"Savannah's been very generous to me," Murray says. "The first place I could make a living off of music. I'm pretty sure the whole time I was in Chicago I did not get paid for a gig, ever.

"So it was nice to come to a place that appreciates music a little bit. I went to jazz school for two years, and I guess I just never practiced enough. And I had trouble improvising.

"So it's been really cool to come here and have a lot of good jazz players ask me if they could be on my record. They actually like my music."

Physical CDs are forthcoming, and in the meantime Best Left Free is available at atwww.sincerelyiris.bandcamp.com.

Also out this week is Superhero, the third full-length from Canadian-born singer/songwriter Lauren Lapointe, who’s been a Savannah resident for a few years now.

"I had an amazing experience in Nashville recording my new CD with the wonderful Thomm Jutz. “I had the honor of working with incredible world-class musicians who were so humble and down-to-earth,” Lapointe says on her website. “Everyone put their heart and soul into making the record sound the best that it could, and I really feel like all of this good energy (as well as talent and ability) is reflected in how it sounds. I am so proud of this collection of songs and the way that the CD turned out.”

Jeff and his wife Tami lived in Savannah for two years or so, during which time he was instrumental in outing together the Savannah’s Songwriters Showcase, spotlighting local acoustic writers and players (Jeff was usually prominent, and an audience favorite, in these multi-performer guitar pulls).

The Rosses pulled up stakes and moved to Atlanta in May.

Unlike earlier Jefferson Ross records, Isle of Hope is a stripped-down album, featuring just Jeff and Jutz, with “no wall between the artist and listener,” according to the artist. “I’m not sorry that I made the first two records like I did, but this time around I made it as honest and vulnerable as I possibly could.”