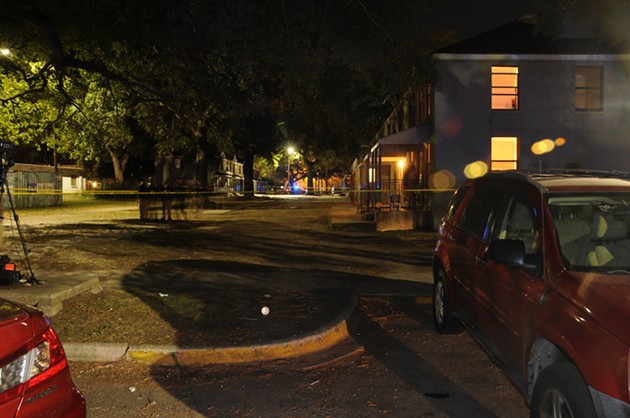 Courtesy of Crime Stoppers
The Yamacraw Village scene of the 2017 triple shooting resulting in two deaths, in a case that remains unsolved.
It was late into the night on Feb. 17, 2017, when Detective Rico Jordan made his way to Yamacraw Village. After an initial 911 call of a shooting was reported at 10:28 p.m. that night, responding officers with the now-demerged Savannah-Chatham Metropolitan Police Department located three victims inside a two-story, single-family apartment. Tori Plummer, 35, and Erik Lawrence, 25, were already dead. A third victim, 27-year-old Dennis Harris, was suffering non-life-threatening but serious injuries. By the time Jordan arrived, Harris had already been transported to the hospital by ambulance, and a trail of blood was all that remained of his presence. Jordan recalls pulling up in his unmarked police car and seeing a small crowd illuminated by the glow of blue lights. He could hear a low hum of voices as he walked towards the Yamacraw housing project’s building 500, and ducked beneath the yellow crime-scene tape, a baptism of sorts for the now eight-year police veteran who was approaching the scene of what would become his first homicide case. Walking through the doorway, Jordan came upon a grisly scene. As he gazed past the staircase on the right and through the living room into the kitchen, the bodies of Plummer and Lawrence lay strewn across the floor. There were no signs of forced entry into the apartment, and from the looks of it all, a subject just walked into the home and opened fire. It was a scenario inferred by a ubiquitous pattern of shell casings. “It was a big puzzle,” recalls Jordan of the case that remains his only unsolved homicide to date. The case hasn’t been classified as cold, but the lack of viable leads has certainly left it on a low simmer as it reaches its third anniversary this year. The deaths of Plummer and Lawrence were the sixth and seventh homicides that metro police investigated in 2017. There would be 27 more homicides investigated before the end of that year, a total of 29 that took place within Savannah’s city limits. Unlike many jobs, detectives don’t have the luxury of finishing an investigation before moving on to the next. The homicides continued to add up over the years. In 2018, there were 31 homicides in the metro area, with 23 in 2019 and 32 in 2020, a 33% rise over the previous year. However, despite investigating roughly 15 homicides and assisting in over 50 in his tenure with the department, Jordan has never given up on this case. He knows that in the end, it will ultimately come down to someone finally deciding to tell what they know. “There are people out there who know information, but they don’t want to talk to the police for various reasons,” said Jordan. “They are afraid of retaliation, being considered a snitch, or just don’t want to be involved.”

“Whatever small piece of information someone has may be the piece that leads me to the next,” Jordan explains. “No piece is unimportant. They all work together to complete the picture.”

In a January report by WTOC reporter Sean Evans, Savannah Mayor Van Johnson sums up a common problem in cases like this where a survivor remains. “It amazes me to talk to someone who’s been a victim of gun violence, and they’ll tell me they don’t know who shot them, or they know who shot them and they don’t want to tell,” Johnson is quoted as saying. While Jordan must act as the voice for his victims, he’s not the only one who wants to see this case solved. The families of Plummer and Lawrence, who continue to push for this case’s continued exposure even all these years later, are forced to grapple with the void of their loss and the questions that remain unanswered, the biggest being who? Who did this and who knows? Jordan is confident that the answer continues to live in pieces, the ones that shape the holes in his puzzle, and he encourages anyone with any information to come forward. “Whatever small piece of information someone has may be the piece that leads me to the next,” Jordan explains. “No piece is unimportant. They all work together to complete the picture.” Anyone with information regarding this case can call Crime Stoppers anonymously 24/7 at 912-234-2020, or can submit a tip online at SavannahChathamCrimeStoppers.org. Tipsters may qualify for a cash reward of up to $2,500. 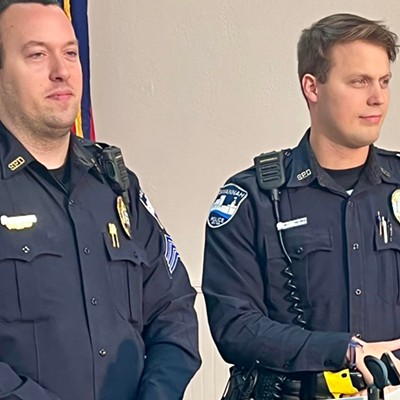