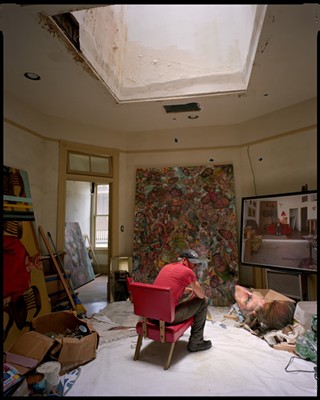 From the porch, the dilapidated house in Savannah's Victorian district looks less like an artist's studio than a cross between a Dickensian nightmare and Eddie Munster's punk rock squat.

"It's the eyesore of the block," warned photographer Adam Kuehl when he gave the directions. "It looks like no one's lived there for 20 years."

It's even more decrepit on the inside.

Webbed cracks riddle the walls. The ceiling buckles as if it's about to burst into tears. Lawn ornaments and stacks of crumbling cardboard boxes obscure the blocky design of the parquet floor, and the entire downstairs seems to belong to a ghostly grandmother hoarder.

A narrow path emerges between the dusty baskets and fractured picture frames. Kuehl seems right at home as he leads the way up a wooden staircase, taking care to avoid the broken banister. He's visited this gloomy relic hundreds of times to take pictures of the space and the man who works here, but he can still appreciate a newcomer's shock.

"It's jarring, isn't it?" he asks as we pass an upended sofa spilling its moldy innards onto the exposed floorboards.

Finally, after gingerly tiptoeing around yawning electrical sockets that look like they might bite, we come to the corner bedroom where Troy Wandzel paints. A Minnesota native who graduated with a degree in illustration from SCAD in 1991, Wandzel is a well-known Savannah persona, a prolific muralist and street artist best known for his thousands of self-portraits, each one unique and rendered in thick daubs of oil paint.

Not surprisingly, the small room has no heat or air-conditioning. But Wandzel cares less about such creature comforts than the fact that it streams light from windows on three sides and the rent is cheap. Four years ago, the owner of the house, busy with other properties, let him move in his canvasses with the promise he would contain himself to the one room.

Kuehl has spent the last three years documenting Wandzel in this curious and chaotic environment, quietly shadowing the artist at work. Intending to capture the elusive alchemy of the artistic process, Kuehl has collated the project for his MFA thesis, "Fixed Flux," debuting this Friday, Feb. 21.

Kuehl is hardly a mere student of the craft. In addition to participating in dozens of group shows, he has already enjoyed a robust commercial career and serves as an official photographer to SCAD President Paula Wallace. His website brims with elegant technical finesse, evident in stunning architectural studies and thoughtful portraits of celebrities who have visited for the SCAD Film Festival.

His nocturnal landscapes have also garnered acclaim, as has his series on the subtle allure of kudzu.

"I'm compelled by the secretive nature of Savannah," he says.

Originally from Oak Park, IL, Kuehl received his undergraduate degree from SCAD in 2005, and for his graduate thesis saw opportunity to diverge from his usual lenswork in the colorful, anarchic mess of Wandzel's studio.

Fascinated with behind-the-scenes studies like A Giacometti Portrait by James Lord and M.G. Stephens' essay "Francis Bacon's Studio," in which the "astounding disorder" of an artist's studio belies the deliberate lines on the canvas, Kuehl found similar inspiration in Wandzel's smeared paint palette and overflowing ashtrays.

"You'd never guess from looking at Troy's work that it came from this," marvels Kuehl, glancing up at the decaying corniches and peeling plaster.

"Every time I came back to the studio, I found something new."

Wandzel says nothing, just adds a dab of green to a massive canvas featuring his own likeness as well as that of Kermit the Frog.

Kuehl employed several different cameras for the project, including a sharply-focused Hassellblad 8x10 and a pinhole stereoview that yielded blurred, ethereal pieces that attendees of the exhibit will be able to see through a 1950s art deco viewfinder.

Further into the show, a time-lapse video provides a dynamic glimpse into a painting's creation. Another piece features 16 vertical slices of the same hallway at different times, evoking the effect of Wandzel moving around through the years.

Kuehl visited the crumbling Victorian at all hours throughout the seasons, observing summer's brash light and the various hirsute states of Wandzel's beard. Not even the most mundane detail escaped Kuehl's lenses, down to the bristles of every single one of Wandzel's 511 paintbrushes, which were individually photographed and bound in a book covered by one of the artist's paint-spattered cloths.

The photographer took his time with mechanics and technique, completing the two-year MFA program in a leisurely four. Possessed with a studious prudency, he found solace in the methodical nature of the project.

"Photography can be manic and transitory, and sometimes I only get a few minutes to shoot a subject," considers Kuehl, who admits he's not a fan of the social media photo frenzy (hence the hashtag #adamkuehlhatesinstagram.)

"Troy has been painting his own portrait for 18 years, reapproaching the same subject in a new way every day. That became a catalyst for me. "

Wandzel is amiably circumspect about his practice of self-portraiture, which is aided by several mirrors around the studio, including an ancient medicine cabinet revealing the dilapidated mansion's previous incarnation as a boarding house.

"I paint what's here," shrugs Wandzel with a grin.

Within the mirrors, there is reflection and distortion, and Kuelhl's collaboration with Wandzel is a pointed exercise of how self-referencing can generate entirely a new element—sometimes, even, that elusive alchemy we call art. In the end, Kuehl's photos reveal far more about the process than about the man himself: That there is infinite value in the familiar, and that with steadfast patience, anything can be distilled to its essential beauty, even as it disintegrates.

"Recording Wandzel's habits, curiosities, mistakes and revelations has inspired me to experiment more within my own medium," writes Kuehl in his artist's statement.

The exhibit ties up this narrative loop with a fitting finale: Kuehl sat for seven hours in the chilly second-floor bedroom, a pile of trash at his feet, as Wandzel painted his portrait.

Did he find it discomforting, having the artist's eye turned on him?

"Not at all," laughs Kuehl.

"After all those other times in the studio, I knew that sitting with Troy would be different and special."