NEW YORK’S Tigers & Monkeys is a band that is as musically diverse as it is powerful and engaging. Led by singer and guitarist Shonali Bhowmik, the band is not easy to pin down stylistically. Sometimes they’re a garage band, sometimes they’re a more Breeders-esque indie rock with experimental leanings, and you’ll even catch some blues and pop sensibilities here and there. It all comes together to create something uniquely theirs, and it’s a sound that has driven them forward since their inception. 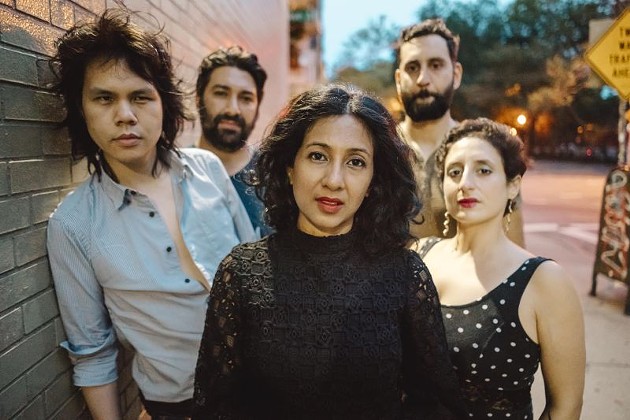 Bhowmik will tell you that she’s a musician at heart, but she’s also made quite a name for herself in the world of comedy – working closely over the years with people like David Cross and John Early. Tigers & Monkeys, which is the second band that Bhowmik has founded throughout her musical career, was even named with the help of comedian Dmitri Martin. Despite the occasional crossover however, which mostly comes in the form of the band’s music videos (one was directed by Fred Armisen), the two are entirely separate creative outlets for the talented performer.

Tigers & Monkeys, who plays El Rocko Lounge on Thursday, Oct. 25, recently released their latest effort Saturday Destroyer and is on the road supporting it. We spoke with Bhowmik ahead of their Savannah stop to learn about the band’s origin, their influences, and the intersection of comedy and music.

Tell me about how the band started. Did you all meet in New York?

SB: There's a blend of southerners and New Yorkers in the band. I knew of some of the other members because they were playing in bands in Florida, and they moved to New York at the same time. For me, it was my first departure towards being the sole songwriter in a band. I used to be in a band called Ultrababyfat years ago, and I was lucky enough to be in a scene where I met all these musicians. So I started recruiting from good people I knew and people that supported my vision as a musician.

Initially it was just a three-piece that was my guitar player, who’s from New York. He’s one of the few [band members] that was born and raised in New York City, so I consider him very exotic [laughs]. From there, it extended to [include] Jason Lam, who I’d always heard of. Do you know Panhandle Slim? Scott Stanton?

SB: This is a crazy coincidence, but I met Jason here in New York and became friends with him. He was low key and really humble, and then you get him on stage and he's a nut. He's amazing. You'd never know, because his disposition is really mellow. But Scott was in touch with me a few years later, and he goes, 'Do you realize that's the guy I told you about that was in a band from Gainesville?' Anyway, we all come together and find each other. It's that thing about being a musician that I love. I don't think I'll ever fear a lack of fantastic, talented, good people who also play music. It comes with being a kind-hearted musician. I'm just going to say that about myself [laughs].

I think I learned early on that it’s best to have good people in the band first, and then the musicianship comes from that. You get with the wrong egos and it just doesn’t work so well.

How did you get to New York, and what is it about the city that lends itself well to being in a band?

SB: I probably have an attitude that wherever I am is the best place to be. When I was in Atlanta, it was perfect for me. Rehearsal spaces were cheap, and it's also another city with brilliant musicians who are ready to play. And touring from Atlanta is really easy because there are so many great cities to get to in a short amount of time. But the transition to New York was the shift of the other creative outlets that embraced me. At the time, my former band had been touring with David Cross. We actually played in Savannah in that time.

I had a feeling that the band wasn’t going to tour as much, so I thought, ‘What’s a city that I love that has already embraced my music?’ I was coming to New York and it felt like another extension of Atlanta. Which is what music will do to you. You know all these musicians and they’re including you in things – and that happened also in the comedy world.

So I had these two worlds that I was being included in without trying. I didn’t come here thinking I was going to be in the comedy world, it just happened. But we’re also willing things to happen without knowing it, so when I got here I got embraced in comedy and got asked to act and started making films.

To me it’s all an extension of music, because music will always be part of me. My goal as a kid was to be rocking at age 85. That’s still a goal, you know? Anyway, New York has been way beyond my expectations. I’m so in awe of the people that work hard, play hard, and are ready to create things at a nonstop pace. Maybe in a way I thought I was outgrowing Atlanta in terms of pace [laughs]. I still love Atlanta. I grew up in Nashville, but this city has really welcomed me and included me in worlds that I had no idea I would be a part of.

Do you think there’s an intersection with music and comedy?

SB: That's a good question. As you ask me that, I think about when I'm performing. I'm asked at times to be the musical guest on a variety show, and a lot of times they have comedy music like Tenacious D. But I always preface my songs with this – feel free to laugh, but these are not comedy songs. Hopefully they'll touch you.

It’s funny because perhaps there are some lyrics that could be taken as comedy or jokes, but I do approach my music in a completely different way. It’s a different outlet that’s completely separate from what the comedy world gives me. Music is that thing where you can’t even express what it is, right? Rhythm, movement, lyrics, melody, and the music – those are five different things that you get out of this one piece of art. Comedy is so literal – you need that laugh. I don’t need people to clap for me to enjoy my experience as a musician.

What are you writing about, particularly with the newer music? Do you write a lot about what’s going on in the world? It’s hard not to.

SB: Yeah, I think so! You being a songwriter would understand this, but I get an understanding of where I'm at after I finish an album. Then I listen and really understand what just happened or what's transpiring within me. While you're doing it, you're in the moment and you just write.

So I noticed on this album that I’m definitely reacting to the world. The theme I see is a woman reminding herself that she’s important, that the world around her is important, and that we can actually confront and conquer these obstacles in our way.

Maybe it sounds trite, but I mean it and I feel it right now. The song “Too Good To Forget” is a newer song in terms of when I wrote the songs. I hear that song now and I hear more than ever how I’m telling the world that all of us belong. At a time when there’s so much negativity and we’re told we don’t belong, and we feel alone at so many points.

We all do belong, and nobody else can tell us that we don’t. Remind yourself that, because it’s tough sometimes. Especially in this anti-immigrant movement in America – it’s like, what does that even mean? It’s so crazy.

When our president criticizes artists, entertainers, etc., for speaking up – like playing down people’s talents as mediocre when they’re clearly not and so obviously projecting his own issues - do you think that emboldens artists even more and makes them more energized creatively?

SB: For sure. I feel like, for me, I didn't know that there were that many people who cared. There are people who are my friends that I've gotten even closer to because they do care, you know? Panhandle Slim is an amazing example of that. It means a lot for any one of us to stand up and fight, but to have a white man be exceptional and stand up for women and people of color is so refreshing.