Water Witch is at 2220 Bull Street between Squirrel's Pizza and 787 By Chazitos.

WITH THE end of Prohibition, the concept of the American tiki bar emerged. And like most movements, tiki popularity died out over time.

In recent years, the interest in tiki has seen quite the revival. Starting in the west, like it did with its inception, the tiki bar has made its way to Savannah.

It should be no surprise that Savannah has fallen in love with the tiki concept. Living in a beachside city, locals are partial to a fruit-flavored cocktail to cool them down during the hot summer months.

There is one new tiki bar that has set itself apart from the rest. If you have visited Water Witch Tiki, which opened this month in the heart of the Starland District, you know exactly what I mean. Why do something at all unless you fully commit? 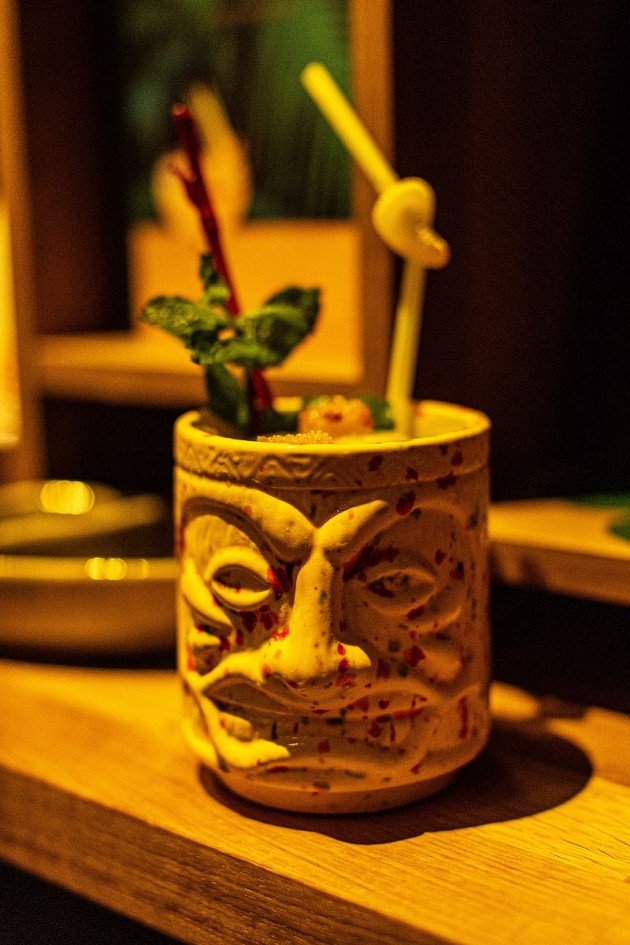 The Ring of Fire cocktail.

When you walk through the vine covered doors of Starland’s Water Witch you will feel like you have traveled to the South Pacific.

Enough rattan chairs to seat an army greet you when you walk in.  I foresee many a late night getting lost in the soft cushions of any one of those seats.

An actual tiki bar made up of a grass and bamboo roof sits in the back. The coolest part of all are the two giant Easter Island Moai Statue replicas resting comfortably next to the bar.

Sea glass, ropes, palms, and vibrant wallpaper are just a few of the exuberant details guests can expect to find.

Brigitte searched for years for the right location to open a bar. For at least the last decade opening a local bar had been her dream.

Starland became her desired location after learning about its growth. She paired up with Atlantic’s dream team, Jennifer and Jason, to bring in their detail-oriented perspective.

The name Water Witch is an homage to the Navy’s USS Water Witch that was taken by the Confederates during the Civil War. Eventually, the Water Witch was burned to prevent recapture and still remains underwater off the Savannah coast.

“Water Witch is a thing—these people who are one with the water and very mystical. That kind of goes to, in our view, the potions that we are pouring, because there is a high level of liquor in these drinks,” she says.

After searching through countless names, Water Witch fit in both its meaning and lore.

“We want to be a modern tiki. We want to be succinct, short. We don’t want to go on forever. So, we have a really cool curated menu,” she says.

For example, the Modern Cocktail section hosts six hand-crafted drinks that are tiki, but reflect Water Witch’s modern update. There are also six classic tiki cocktails as well as two types of rum bowls. I am a guest that appreciates a well-thought out menu, instead of flipping through a novelesque selection.

The Chi Chi Pina Colada adds a touch of Southern with a finish of pecan syrup drizzle. USS Water Witch could be called the signature cocktail, and it features good rum, whiskey, ginger beer, citrus, and bitters.

“We have the classics—those are all very well-known drinks in the tiki world. And, we have our spin on some tiki cocktails. Obviously, we have a full bar in every other way,” Jennifer explains. 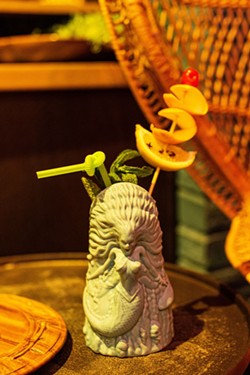 Because let’s face it, tiki is not for everyone, but having fun is. If you want all of the atmosphere but with a less showy drink, you can still order a vodka tonic or whiskey coke.

The wine list was created by wine expert Jason Restivo. He curated the list to tie in with the Polynesian offerings.  The beer list is succinct and has both Georgia and Pacific area beers, all of which are light and balanced.

Each drink acts as a showstopper. If you take that much time building out and creating such an immersive atmosphere, you cannot skimp on the drink presentation. Each one-of-a-kind cocktail has an original coordinating tiki glass.

Water Witch plans on extending the drinkware even more as time goes on. You can buy any of the unique cups or distinctive items.

Apparently, its common practice for tiki bars to feature vintage items for sale. Water Witch’s “gift shop” sits to the right of the entrance and looks more like the décor than a shoppable shelf.

A reasonably sized food menu has been included to counteract any well poured drinks. Seven offerings, like Ahi Poke and Banana Leaf Pork, sit on the boutique bar’s menu, all of which reflect the vision of the restaurant.

“The tahini dip is something I have made for years. Everyone has always been drawn to it and loves it and wants the recipe and tries to make it. I knew that was something I wanted because I thought it would go really well here,” Brigitte says.

Upon first seeing it you may think it is created with avocado due to its vibrant green hue. The color comes from all of the extremely fresh ingredients, like parsley and cilantro, that are jammed into the creamy and spicy dip.

Just like the tiki drinks, the PuPu Platter is ornately presented on a three-tiered platter. Traditionally a pupu platter is an assortment of American Chinese and Polynesian cuisine, most of which is fried. For Water Witch a heavy serving of fried food was not an option, and they keep their light by offering an assortment of the items listed on the menu.