@Ships of the Sea Maritime Museum

AURA Fest has become a staple in the Savannah scene since Tim Walls began organizing the series in 2000. 2019’s festival boasts a hugely impressive lineup of metal, hardcore, and rock bands that include ZAO, Fit For An Autopsy, Evergreen Terrace, and LIMBS, among others.

Ahead of this year’s festival at Ships of the Sea Maritime Museum on Feb. 16, we spoke to Walls about the history of the festival, the importance of all-ages shows, and what he hopes AURA Fest continues to do for the music community in Savannah. 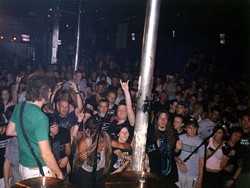 What made you want to start putting on shows and getting involved in the live music world?

Walls: When I was in my teens I was playing in local bands, and the things I remember the most are that we didn’t really have anywhere to play and we couldn’t get into the venues because we weren’t old enough. And when I got older to get in to some of those places, they’d all closed down. I was so mad about that, and I still remember how I felt.

I just got motivated to get into doing it, and I’ve always had a love of putting on get-togethers. Even as a kid I’d have Halloween parties and stuff [laughs]. There were different promoters in town who mentored me a little bit and who I learned from, and I just got involved at a young age.

So was it always going to be an all-ages thing in your mind? There is that aspect of it that I think appeals to a lot of people.

Walls: Yeah, it was. I’ve done some club shows that have been 21 and up, but it’s always been part of my mission. That was one of my things, was to provide all-ages shows. I also want to keep a standard of having an accessible venue to do shows at, and have the best production I can put on with what I have to work with.

There’s definitely a need in the scene for house venues and bars, but I think the youth can really benefit from having a good experience going to concerts. I just really believe is an experience you’re not going to get watching YouTube. I’ve talked to kids even in college who’ve never been to a concert before.

It’s one thing also to go to a house venue, but when you go to a show you can feel the PA and the drums and the bass. And there’s lighting that adds another element to the experience. I just think it’s important for kids of all ages, especially in college, to have something to look forward to.

In the past several years of you doing this, what’s been the most rewarding thing or a standout moment? And what has been or can be the most challenging part of doing this?

Walls: The people that come out really get into the music, and the energy has been really awesome. I think overall, everyone who’s performed has said good things. It’s about the experience for me.

On the other end of things, there’s a lot of challenges. It’s a large venue so it takes a lot, and we only do it once a year. If it was something we did every month, it’d be a lot easier to get things down.

Why do you think this is an important event for our community, and what do you hope comes out of this in the future in terms of impact?

Walls: I’d like, more than anything, to see the festival grow in attendance and to bring in bigger acts than we’ve been booking. Right now my focus is really doing this one big thing, but I would like to do more. And even if it’s not just me - there are other really good promoters in town. We all do what we can.

If we get these new venues that have been talked about, I’m not really sure if we’re going to be seeing the bands that I’m promoting - hardcore, metal, etc.

I don’t know if we’ll be getting a lot of the tours that come through, say, The Masquerade [in Atlanta]. That would be nice, and I’d like to see that in this town. It’s a shame that anyone has to drive four hours to see a show.