Time for the Craft Brew Races! 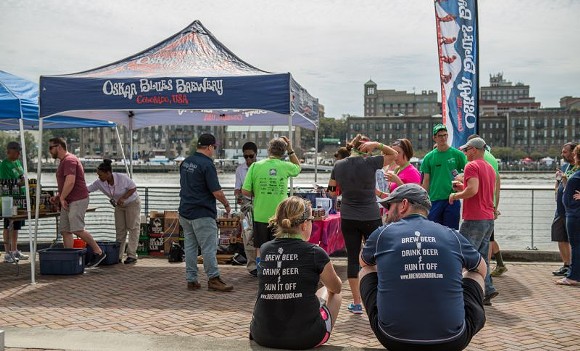 BREW/DRINK/RUN was founded under the concept that good beer and a healthy lifestyle can, and should, go hand in hand. The combination of a good healthy 5k run with a craft beer festival is a dream that we at BDR have had many times.

Craft Brew Races started as five events spread out around New England. They have since grown to eight events around the country. Savannah is lucky enough to be one of the locations and we’re all better for it.

The crowd for the Craft Brew Race is pretty diverse. Last year’s run served more than 500 runners. There were several hard-core runners but also plenty of people who were there for a fun run.

There is a costume contest and since the Savannah edition of the Craft Brew Races is March 12, just in time for St. Patrick’s Day, so expect to see plenty of green.

The race and festival take place at the Savannah International Trade and Convention Center. The route is a simple out and back, though slightly different from last year’s race.

If you ran last year you’ll be happy to know the start/finish line is now adjacent to the Trade Center so parking and the festival will be easily accessible this year. The route takes you out along the west end of Hutchinson Island. It’s not the most scenic of routes but there is beer waiting at the end.

The Craft Brew Races Beer festival starts at 12:30 and runs until 4 p.m. This year’s version includes more than twenty breweries, mostly from the Georgia area but with some national favorites thrown in.

Expect to see all of the Savannah breweries represented as well as a number of regional breweries such as Jekyll Brewing and Southern Barrel and the Atlanta area regulars like Eventide, Orpheus and Wild Heaven to name a few. The national labels include Ballast Point, Brooklyn, Founders and Sam Adams.

Food vendors will be available and The Wave Slaves will provide the live music. Last year’s festival was very well run. With tickets capped at 800 the crowd was manageable and lines were minimal.

Are beer and healthy living not enough for you to sign up? A portion of all proceeds will go towards The Georgia Craft Brewers Guild so by running and drinking you’ll be helping the Guild create a better beer environment throughout Georgia. Plus runners receive finisher medals and everyone goes home with a pint glass.

Both the race and festival are located at the Savannah International Trade and Convention Center. The run starts at 12:00 pm while the festival opens its doors at 12:30. Both events are strictly 21+ (bring your ID). Tickets come in several flavors; there is a run and festival combined registration for $55, a festival only ticket for $45 and a designated driver ticket for $15. Race day registration is available but prices go up $10 so register ahead of time at craftbrewraces.com/savannah.