Kelley is planning for this former homeless camp and cotton mill site off Wheaton Street to become a village of 72 tiny homes.

WHILE YOU and I were decorating snow men and delighting in our unusual wintry weather, a woman apparently froze to death in the homeless camp under the Truman Parkway.

Valerie Gleaton, 49, was found stiff and blue on the morning of January 6. The previous night’s low was 20 degrees. Her boyfriend reported that she hadn’t been drinking or doing drugs.

Or you might respond with the anger and disbelief that I felt when I discovered, a few weeks later, that Savannah doesn’t have a master plan for affordable housing.

Nor do we require affordable set-asides in development plans. Think of all the things that Savannah master plans and requires developers to set aside, like parking and retail space.

It’s true that frozen bodies under blankets are nothing new up north. And some people are homeless because of destructive addictions, like alcohol or drugs.

But it’s also true that homelessness is a policy that we intentionally plan, just like we plan superior shopping experiences for our tourist corridors.

Fortunately, a few dedicated and headwind-facing activists have better plans for at least 72 homeless people in Savannah. Despite setbacks, inertia and lack of any significant government support, they’re building a community of tiny homes for homeless veterans.

“The only way we’re going to solve it is by ensuring that people have housing,” says Cindy Kelley of the non-profit Chatham Savannah Authority for the Homeless, which isn’t a government agency, contrary to its dull name.

“We can do a good job making things beautiful but small and then people can really afford to live in them.”

Cindy Kelley shows a model of a tiny home to be constructed for 72 homeless veterans.Center:

This month, the organization will let bids for the first stage of a $1.7 million project to build 72 affordable homes, most of them 128 square feet, on 3.5 acres of land off Wheaton Street. Two earlier site locations failed because of community opposition.

Kelley and I walked around the future tiny homes village, a former homeless camp and former cotton mill site. She also showed me inside the model home, which you can see from the outside in the Savannah Baptist Center parking lot, also on Wheaton Street.

“If you need to have a lot of things, this isn’t the choice for you,” Kelley says as she and I shuffle from bed to kitchen to bathroom in a few steps. “Living tiny is a lifestyle choice.”

Judging by the success of tiny homes shows on television, it’s a choice many Americans are making to get away from an over-consumptive and housing-competitive society.

Tiny homes typically cost less than the average new car. CSAH is building each home for $23,611, which includes the land, utility hook-ups, appliances and furnishings.

Homeless people, of course, have few choices, except maybe where to sleep, from among 25 homeless camps in Savannah, and where to eat, from among several church missions that offer hot meals for breakfast, lunch and dinner.

Inside one of the houses.

“We do food well,” Kelley says of short-term shelters and kitchens, many of which require homeless people to attend meetings, take medications and stay off drugs and alcohol to receive their services. “It’s not solving the problem. It’s silly to expect people to really solve their issues until they’re in stable housing.”

So far, CSAH has raised about $400,000 for the project, mostly from private donors. So there’s still a long way to go. And ultimately, it’s 75 homes for 4,000+ people who end up homeless at some point during any given year in Savannah.

And 15,000+ people in Savannah are on a waiting list for affordable housing. Can Valerie Gleaton’s death shake anyone in this community from apathy to action? 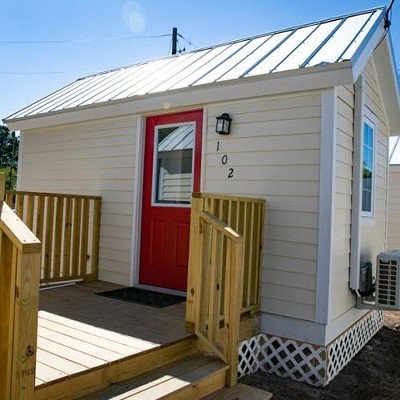