Toasting the past, tossing toward the future

All events held at the Sandfly location (7360 Skidaway Road)

"CREATE your own path, and if it's a worthy path, people will join you." Those are the words Sam Calagione, founder of Dogfish Head Brewery, spoke in a TEDx on reinventing beer. Paul Childers heard those words and decided to apply them to his own entrepreneurial endeavor: re-imagining the neighborhood pizza joint.

When Childers, a native Savahannian, first learned about the promise of the Your Pie restaurant franchise, he was sold. "Your Pie is taking an old concept and adding a new presentation to it," he says. "People, growing up, have warm and fond memories of pizza; but it's grown a little stale."

In a strategy that coincidentally mirrors that of Dogfish Head (Childers' favorite brewery), Your Pie updated the concept of the pizza restaurant by looking to the past. With Dogfish Head, that lied in reconstructing ancient ales from early civilizations, like their Chateau Jiahu with a list of ingredients sourced from a 9,000 year old Chinese tomb.

Thankfully, no archaeological experience was needed for Your Pie's revelation, as Italians have kept their methods in place for centuries. Childers recounts the company's roots:

"The founder of Your Pie went on vacation with his wife of Italian ancestry, and what he saw there was the old way of doing it. Everybody had a brick oven in their backyard and made small pizzas. It's a family gathering."

That concept of family is important to Childers, whose son Michael is also closely involved in the running of their two Savannah Your Pie locations. "I graduated school and decided that sitting on the phone and answering emails every day wasn't for me," says Michael.

So, he found himself helping out with the stores and encouraged expansion in an unexpected way — establishing Your Pie as a go-to spot for craft beer enthusiasts.

It's rare for a chain restaurant to forge a unique identity from its sister locations. That's the entire point of a franchise, after all. These ready-made business opportunities offer entrepreneurs a way to get a head start in the extremely competitive world of food service. Why try to adapt a proven format?

But specializing in craft beer as well as hand-made pizzas just made sense, particularly because the growing world of specialty ales are a passion of both father and son.

Their craft beer journeys even started at the same time. "I just got bored with beers. They all seemed to be the same" says Paul. "Craft beer is a journey, not a destination."

That revelation came only a few years ago. Now, they find themselves in the position of being ambassadors to craft beer by refusing to carry many mass-produced (but still very popular) beers from major players like MillerCoors and Anheuser-Busch. Instead they steer customers to offerings from smaller artisanal breweries like Stone, Allagash, Savannah's own Southbound and, of course, Dogfish Head.

For those beer drinkers whose current experiences may not extend past the industry leaders like Bud Light, Michael is quick with suggestions.

"It's easy to transition to the wheats like Allagash White or Southbound's Wit with the lighter, lemongrass flavors. The Tybee Blonde from Coastal Empire is another great transitional beer. You would probably stay away from something that looks like chocolate milk."

That craft beer advocacy has expanded into a series of craft beer tasting nights highlighting some of their favorite breweries. The events include rare, limited edition and highly coveted beers, as well as tasting flights for those wanting to experience and compare a broad range of flavors.

Hosted at their Sandfly location in the Norwood Shopping Center, Your Pie's newly upgraded patio space makes for a perfect socializing environment.

"With the oak trees, it's a little urban-meets-country and the outside was a perfect expansion for us. The outside seating gives us a cross between a mingling/gathering place and traditional dining" says Michael.

The first tap takeover of the fall will be October 10 and features beers from Founders Brewing Co. of Grand Rapids, Michigan and Westbrook Brewing Co. based in Mt. Pleasant, South Carolina. Four additional events continue through December.

Paul believes Your Pie and these craft breweries have a lot in common.

"As an entrepreneur myself, I love what these guys had to fight for. From being able to brew to government regulations and getting around the big guys not allowing them shelf space or bar taps. They kept fighting their way. It's a David and Goliath story. Despite all of their obstacles they succeeded." 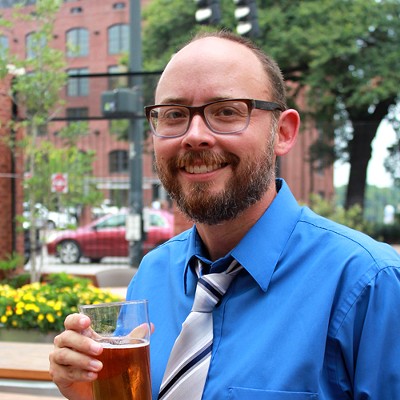