Tom Coleman takes Godspell to the next level

The Savannah Community Theatre presents the 2012 Broadway Revival of Godspell 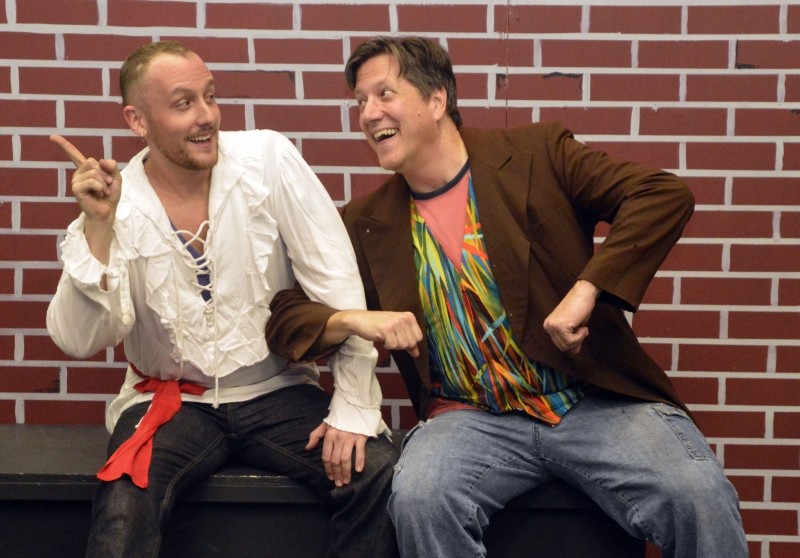 Jesus (Ryan Ahlert) and John the Baptist (Gary Stickland) ham it up.

But perhaps the greatest success story is the sense of family and community among former performers that has wondrously stood the test of time. Thanks to the blessing of the Internet, Coleman’s “kids,” now mostly in their early 50s, have managed to keep in touch and reminisce about old times—like performing in the timeless musical Godspell in the early days of the Savannah Young People’s Theatre.

“They have their own kids who are teenagers now,” Coleman says proudly. “They all write each other.”

It’s been a minute since we’ve heard from Coleman and the Savannah Community Theatre here in Savannah; he’s been busy with an exciting project of his own. The musical he co-wrote, Visionary Man, was picked up, requiring Coleman to fly all across the United States—L.A., Boston, New York. He’s doubly busy now, as a screenplay is in the works.

It’s been a rewarding yet taxing time, and Coleman is home in Savannah to recharge. No lounging about for him, though: for this man of the stage, time off is best spent in the director’s chair.

Godspell is one of those shows that has just stuck with Coleman. The fixation began when he worked on the road tour as a sophomore in college.

“It had to have been 1968 when it came through Georgia, the original show,” he remembers. “I’ve loved it ever since then.”

In his career, he’s directed it seven times.

For Savannah Community Theatre’s first performance of 2015, Coleman presents the 2012 Broadway Revival of Godspell, and he’s called on some old pals for help.

“I was given a CD of the 2011-2012 revival,” he explains. “But I had never listened to it. When I knew that I was going to have time and I was looking for a show, I opened it, took it out of the plastic, and listened.”

What he discovered was a Godspell unlike any of the productions he’d previously experienced.

“I realized what a different orchestration it had, and a couple of songs that had been reworked and put in the show,” he elaborates.

To gauge interest, he reached out to his “kids” on Facebook.

“I said, ‘This is a strange question, but would anyone want to do the revival of Godspell? I can’t believe I’m saying this, but I’m actually thinking about doing it.’”

In a mere day, Coleman had 70-80 replies. In two weeks, an ensemble of ten performers was ready to go.

“They all have professional jobs—which is why I can’t believe anyone’s doing this at all!” he laughs.

History will be repeating itself: Gary Strickland, who played John the Baptist in the Savannah Young People’s Theatre production, returns to his role. Basically, the 2015 show has been a big family reunion.

“I kid them every day, because the first time I did Godspell, everyone in the cast was 15 or 16,” says Coleman. “I call them ‘The Geriatric Cast of Godspell.’”

Coleman encourages the community to come out and catch a performance, even if they’ve seen the musical before. After all, he’s embracing the revival’s cheeky tagline: “Godspell? I Love That Show!”

“It’s like Blue Man Group—everybody’s seen it five times,” he laughs. “Come on and reminisce and see what silly things we’ve done with it.”

In addition to new songs and arrangements, the script has been dressed up and modernized in places.

“There are a lot of new references—I think they’re hilarious,” assures Coleman. “They poke fun at Donald Trump...the show has a lot of references to current things and current political things.”

Plus, it will just be fun to see the gang all back together.

“It’s been wild,” Coleman says with a grin. “And as far as working together, they’re hilarious. They really love each other.”