Tossing up a ton o’fun at the Scottish Games

Savannah celebrates a Scottish presence going back to Oglethorpe 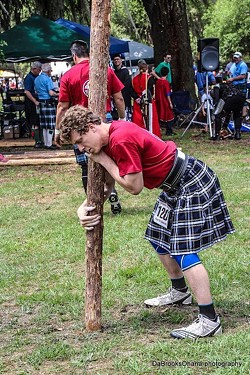 THIS Saturday, Bethesda Academy will host the 42nd edition of the popular Savannah Scottish Games.

The juxtaposition of Spanish moss and Scottish heritage isn’t as odd as it may sound at first.

The St. Andrew’s Society — named for the patron saint of Scotland, a patron also shared by Greece and Russia — formed a Savannah chapter in 1737, a scant four years after Gen. James Oglethorpe founded the colony of Georgia here.

“Savannah has one of the oldest Scottish games in the country,” says Stewart Marshall, a well-known local musician who also serves as current president of the St. Andrew’s Society of Savannah, which sponsors the Games.

“They came over with Oglethorpe on his second trip over, specifically to settle soldiers to help ward off the Spanish in southern Georgia,” says Marshall.

“And many of them soon became important merchants and figures in local government. They were all here to forge a new life.”

The Scottish Games focus mostly on tests of strength.

“Back in the old days the Scots would prepare themselves for battle by hosting games. These are real athletes doing the caber toss and the sheaf toss,” Marshall says.

The Savannah Scottish Games are on a circuit of similar events, with contestants vying for prizes.

“It’s really a competition. People come from all over the world to compete,” Marshall says. “These folks are all burly! Say what you will about wearing a kilt, but these people mean business.”

On the “lighter side,” Marshall says there are also Highland dancing competitions, pipe bands, and of course the always popular border collie athletic exhibitions.

The Highland dancing will be part of the 2018 Highland Dancing Southern Regional Championships, one of six competitions held throughout the U.S. each spring.

This is Marshall’s first year as president of the local St. Andrew’s Society, which he first joined in1999.

“We started the games here back in 1976. Of course, Gordon Varnedoe was instrumental in bringing the games to Savannah,” says Marshall.

The Savannah Scottish Games were first held at Savannah Country Day School, then moved to Old Fort Jackson for many years.

“But there’s no shade there,” laughs Marshall. “Then we migrated to Bethesda, and they have been very welcoming. It’s a wonderful background right on the Moon River.”

Marshall says the grounds of Bethesda “are so amazing, and also what it might have looked like back in the 1700s to have the games going on then.”

Beer is sold at the games, with Asheville N.C.’s Highland Brewing providing the brews.

Marshall says there will be an exhibit dedicated to studying Scots-Irish genealogy as well.

“People may or may not know where the Mc-Something family name came from,” he says. “There will be opportunities to research that.”

And Marshall says there may be an extra-special guest on hand.

“I believe Gen. Oglethorpe himself may be walking the grounds with us on May 5,” he laughs. “We like to really get into the period.”