THOUGH Location Gallery at Austin Hill Realty has only been on the scene since March, it is already distinguishing itself as a powerful player in the Savannah art scene.

In Tape, Paper, Scissors, the gallery’s fourth exhibition, curator and artist Peter Roberts worked alongside Jon Arge and Len Ciliento to develop a show that celebrates non-traditional materials and the many types of perfectionism that come from replacing the artist’s paintbrush with a pair of scissors and an X-Acto blade.

The exhibition is on display through July 8.

Though vastly different in their respective styles, the three artists represent a shift in the gallery’s typical fare from traditional paintings to non-traditional works.

“A lot of people have this supposition that art is paint on canvas,” curator and artist Peter Roberts told me. “They have a hard time opening up and naturally gravitate towards canvas. It’s just more familiar.”

An artist well-known for his diorama-style “Head Case” pieces (which consist of rows of tiny stylized portraits on paper, often drawn from pop culture) and well-versed in the realm of paper-craft, Roberts knows the incredible magic paper is capable of.

Despite only including works from three artists, the exhibition certainly ticks the marks Roberts wanted it to.

Each artist contributes a unique perspective, color palette, technique and style to the exhibition. Thoughtful curation from Roberts punches the show up another level–works from all three artists are blended together in a rhythmic, organic fashion.

In addition to curation, Roberts’ additions to the show include several “Head Case” pieces (including a trio of over sixty depictions of Star Wars characters across the original trilogy of films), several diorama-style pieces, and a handful of geometric, minimalist paper cut works.

Though the “Head Case”s are certainly crowd-pleasers, it’s Roberts’ minimalist, monochromatic geometric works that shine here – literally and figuratively. Crafted out of silver paper coated with a slight sheen, Roberts expertly slices and nicks his material into a sea of undulating polygons.

The shapes are layered and turned at varying angles to catch the light differently; other shapes are lifted above the flat paper plane to create depth and introduce true shadows into the work. These works push the boundaries of expectation when it comes to what might be achieved with a single material so ordinary as a piece of paper.

Like Roberts, Arge lifts his paper strokes up off the picture plane to create depth and introduce greater complexity into his lines via shadow. Though small in size, Arge has a secret weapon: vibrantly colored paper. Color-aid paper, I mean.

Long used by design teachers to help students understand and use color, Color-aid paper is a staple in the world of color theory.

“The subtle texture, the richness of depth, and the matte appearance are, to me, spectacular,” Arge explained. “Never mind how the colors socialize with one another! Twenty-five years on and I’m still continually delighted by how gracious–or bratty–the colors can be when seated next to one another.”

The sharpness of Arge’s colors is matched by his sharp attention to detail and craft.

“My scissors are no different than a painter’s brush or a writer’s sentence,” he told me.

“They are an editing tool that magically translates thought into [something] physical.”

Dancing on Frazier by Len Ciliento

Dedication to tedium and precise detail is a theme throughout the show – each piece is masterfully crafted, each line cut with a sure crispness.

Surgical precision doesn’t have to mean sterile results, though.

Len Ciliento’s work stands in contrast to the other pieces (though Roberts’ curation helps blend it into the overall show with ease) with its dynamically layered colors and collage effects.

Ciliento’s work also lends some welcome texture: each of his pieces is created entirely out of Japanese Washi tape.

Made from natural fibers like bamboo or tree bark, Washi tape is a strong, semi-transparent tape which is easily moveable for precision positioning and perfect for layering.

For Ciliento, it is the adhesive equivalent of oil paint, but without the annoyance of actually being oil paint.

“Tape enables me to create the kind of straight lines I never could with paint and a brush,” he told me. “[It’s] very forgiving. If you lay a piece down and it doesn’t work for you, you only have to peel it off and try again.”

The only works that feel like genre paintings, (Arge’s work is all landscapes and Roberts’ is generally more interested in form) Ciliento’s contributions are impressionistic in style with a decidedly modern voice.

He displays extraordinary control over his medium, rendering figures and shapes sometimes with a focus on the angular, and other times with a reverence for the organic.

The layered Washi tape produces a wonderful, radiant effect; the colors are blended but never muddied.

In keeping with Location Gallery’s exciting financial model, net profits from the show are designated to a local nonprofit.

For this show, the benefitting nonprofit is the Deep Center. So far, Location Gallery has raised approximately $6,000 for Savannah nonprofits.

Balancing social activism though the sale of fine art with a spirited sense of curation and an eye for joyful work, Location Gallery appears well-positioned for sustainable success in Savannah’s growing art market. 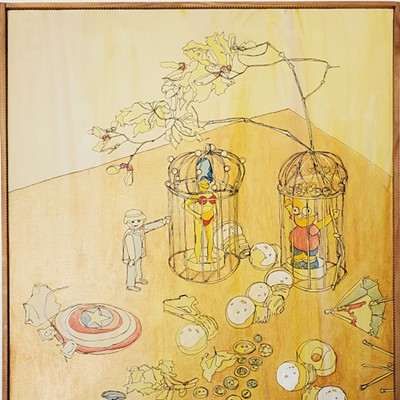