Trick’s is a treat on Bull Street 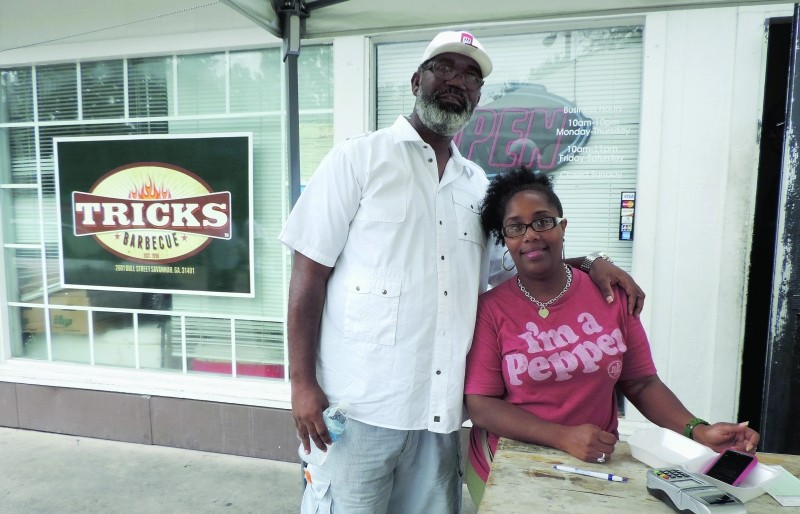 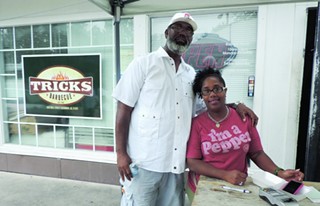 RIDING DOWN Bull Street you can see the smoke billowing up from the long shed with the painted flames, so you know that Trick's BBQ is doin' its thang.

But when the smoke is absent that means that the goodies are gone—bad news for a BBQ lover.

Head over to the tent out front where Maureen Walker, wife of the owner, will be standing at the table taking orders and handing em through the screen door—this is strictly a take-out venture—then have a seat to wait under the tent, inhaling the rich scent of smoked meat and chatting with your fellow BBQ aficionados.

It’s amazing how a weekend hobby can turn into a thriving business. Ricky Walker, who spent many years at Gulfstream building jet engines, was a well-known host of the ultimate BBQ feast in his neighborhood.

“I learned the ropes from my bro’, Robert Lowery”—AKA Boss Hogg, Walker says—“make sure you put that down now. I started out fixing BBQ for my family and a few friends on the weekends, then the parties just got bigger and bigger.”

When the time came to retire, Ricky heard of a nice little corner spot downtown that had finally come up for rent, so he opened a thriving car detail shop there at 42nd and Bull Street... then gradually discovered, when winter winds blew, folks are disinclined to be out in the cold to get their car washed.

“I thought to myself, now what could I fit in that extra spot there?” he tells me. “I kinda naturally figured that my weekend gigs would be just the thing.”

November 2012 saw a business expansion, the news of which had already set mouths watering for months: Trick’s BBQ opened on that little corner as a companion to the car detailing biz, and Savannah BBQ history was made.

Boss Hogg assisted with his handmade smoking tanks, the shed, with it brightly painted flames, began to suffuse the air with the kind of delectable aromas that made cars skid to a stop, and in no time at all, there was a steady stream of customers lining up under the tent, rain or shine.

The meat is dark, smoky, with a good balance of chewy and tender, and the sauce is a mustard-based with just the lightest sweet touch.

Ricky says, “I want everyone to know that I make that sauce fresh everyday—you’ll never get anything over a day old here. Just like my seafood salad is made fresh daily on the weekends.”

He gets his crab and shrimp for the seafood salad from Russo’s. Made with fuselli (corkscrew-shaped) pasta, nicely creamy without overdoing the mayo, and plenty of actual seafood, it’d make a nice lunch or light dinner.

One item worth mention to those of us who enjoy lamb—which seems to be a rather scarce and pricey commodity around here—Trick’s serves up a sizeable portion of smoky meat on the bone, the largest box running only $12.

Try to get that much lamb anywhere else in Savannah, especially in the fine establishments downtown, and you’ll be coughing up at least $30.

My foodie buddy was very enthused about Trick’s BBQ beef—good flavor, tender though not soft, with a dark crispy edge to it and plenty of meat on the bone—the pieces look like the ends of a T-bone steak—and these go quite well with the potato salad, which is standard fare here.

The Red Rice is a tad dry for my taste but has plenty of sausage in it; the baked beans are pretty simple as well; all boxes are served with a slice of soft white bread.

Over and over, as I waited, customers asked for the BBQ pork, the full rack of ribs being very popular fare, with requests to make sure there was plenty of white bread included.

The smoky chicken (drumsticks only) is quite good, and if you’re inclined to re-fashion leftovers, it makes some fine and tasty chicken salad the next day.

I like the sauce, which reminds me a little of Barnes, flavor-wise, though I prefer to get mine “on the side”, which I recommend, because there is just no telling how liberal the food prep folks inside can get.

I’ve had meat come back lightly brushed, just enough to lend it’s tangy flavor to your dinner, and seen boxes where the pork was completely hidden by a vast wash of vivid orange—best to get it OTS and do it yourself at home.

It was a relatively cool, cloudy day when I visited Trick’s most recently, and I was fortunate to find both Maureen and Ricky there. Maureen is always cheerful and bustling around filling orders quickly (cash or cards accepted), whereas Ricky is the dignified and gracious Patriarch of BBQ.

His white-bearded countenance can come off as rather stern at times, but he loves his work and knows he has a great product to offer.

I ask him to smile for the photos.

“I don’t do much smiling. Good BBQ is a serious business,” he answers.

“You stand at those smokers all day, from early morning, gettin’ that meat just right, and that’s some hard work. Did you know I sell about 50 smoked turkeys a day during the holidays?”

Well, no, but that’s comforting to hear, especially since I plan on lightening the load in the kitchen this year, and a fine and tender bird from his excellent smokers should just about do the Trick!