Find Troupial at the Forsyth Farmers Market every Saturday morning, or at The Diplomat Luncheonette, 314 Drayton St.

"STREET FOOD, home flavors" is the slogan of Troupial, a small Venezuelan bakery built on love and history.

Owner of the place and the young, vibrant brain behind Troupial, Majo Laprea, comes from a long line of history and family. Most locals know her family from their successful restaurant on MLK Jr. Boulevard, Rancho Alegre.

Laprea spent a lot of time at the restaurant before deciding to pursue her passion by starting her own venture. Originally the focus of her business was purely coffee.

But what is a craft cup o’ joe without a craft pastry to pair with it? I think Laprea quickly recognized this and began learning to bake.

She started small, with deliveries of her Venezuelan baked goods by bicycle, gaining followers as she went. Eventually and with the help of a friend, Matt Garappolo of Pinkie’s, the Diplomat, and Savoy, Laprea pushed ahead. That help includes baking her treats in the Diplomat’s kitchen. 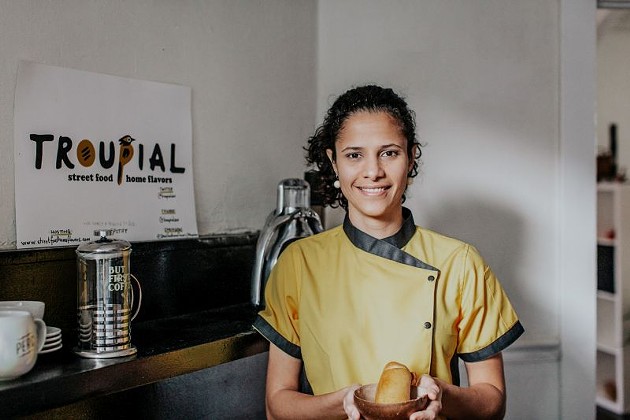 Currently Troupial vends at The Forsyth Farmers Market and The Diplomat. Laprea’s success has allowed her to focus on her original dream, opening a coffee shop. This year, around May, Troupial will be opening its very own coffee shop in the Starland district.

“Sometimes people think that specialty coffee shop means you buy the beans from the local roaster or have latte art in coffee. It is more than that. We are trying to have fair trade with farmers, to try to communicate from the farmers to the cup. Go in and have control in communication, and to have specialty beans in town,” Laprea tells me.

Working with the farmers will result in importing green coffee and creating their very own flavor profile through roasting the bean with PERC Coffee Roasters.

All of her flavors and creations honor her heritage and document her memories growing up in Venezuela. Laprea explains to me how she arrived here. 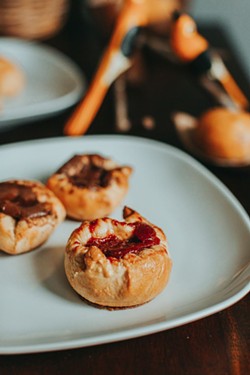 “The idea with this project is to try to recover or connect to my roots. I left my country eight years ago, and moved to Savannah two years ago because I was living in Argentina traveling. I was always thinking what to do, because I was an electrical engineer. When I went to college, I was working in a prep kitchen cutting potatoes, tomatoes, cleaning to make extra money. After that my passion is definitely is coffee. I remember when I was working as an engineer, people were like, ‘You spend a lot of time making your coffee, so why are you here in an office?’ I started connecting points, thinking I need to go back to my roots.”

The name Troupial also connects to the Venezuelan roots. The troupial is the national bird of Venezuela.

Because she bakes constantly, Laprea is learning and tweaking recipes more and more every day. Her menu changes, but there are several regular items you can buy most weeks like cachitos, tovars, and golfeados. Arepas are planned to make an appearance once the coffee shop opens.

A cachito is a pillowlike soft filled dough with a bit of chew on the outside. Variations include ham and cheese, just cheese, blueberries and whatever else Laprea feels like jamming inside.

My favorite was the ham and cheese, because the salty sweet ham layered inside of the delicate dough wakes up your taste buds as you eat it.

According to Laprea, “I usually have a vegetarian option. I like potatoes, leeks, mushrooms, and cheese, but I also use spinach and cheese, and just cheese. People like just cheese.”

Guava and cheese or Nutella were the two variations of Tovar I sampled. Tovar is not a traditionally Venezuelan pastry; it is a treat straight out of Laprea’s head.

She explains it to me this way.

The dessert option out of all of the treats was a Quesillo, or Venezuelan flan. It is the ultimate homemade version of the sticky sweet custardy dessert. Troupial’s is covered in a caramelized syrup and features a pudding soft creamy center.

Although most might look at the dessert and think of it as flan, nothing could be farther from the truth.

Laprea assures me it’s better than flan, explaining, “Quesillo queso is cheese. Traditionally people named it that because to Venezuelan people flan is the product that you buy in a box, the commercial one. This one is a home recipe, from mothers and generations. You can see it has little holes and that is why, because it is similar to a piece of cheese.”

The history of the Golfeado is most interesting considering the soul of Troupial. It is believed the name Golfeado was given by coffee farmers who first devoured these rolls. A golfeado is similar to a traditional sticky bun but with the addition of cheese and sometimes anise.

The cheese is the balancing factor in what can occasionally be an overly sweet treat. Although not always on the menu, like her arepas, Laprea features this traditional treat every so often.

Beyond distinguished coffee and history rooted food, the Troupial coffee shop plans to stay open later than most coffee shops, feature events, and host patrons after shows at Victory North.