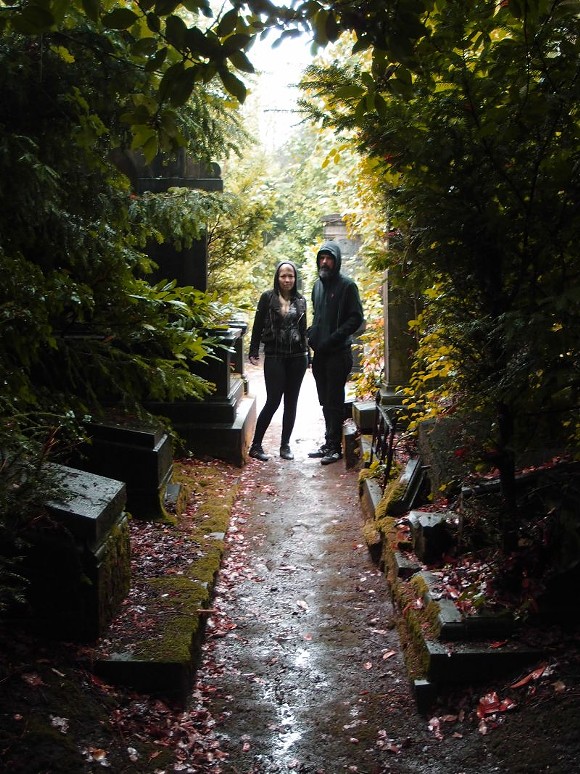 IT'S A visual that will sear itself into your brain: the silhouette of Gazelle Amber Valentine digging into the fretboard of her Flying V guitar, throwing her curtain of hair in time with bandmate/husband Edgar Livengood’s drums, against a towering wall of white.

Since 1993, Jucifer has completely swallowed audiences in the primal grind elicited from the expanse of speakers, known as The White Wall of Death, that serves as their backdrop. As Valentine growls and howls, there’s no escape: Jucifer has you in its claws, dominating the stage, the venue, sending you home with ears ringing in its memory.

The duo returns to Savannah on their “permatour”—for the last 16 years, they’ve lived out of their RV and even recorded their latest LP, District of Dystopia, in their mobile home.

We caught up with Valentine to discuss the upcoming Jucifer documentary, lyricism, and how to survive—and thrive in—the vagabond life.

Jucifer albums are lyrically heavy on story, from fiction (I Name You Destroyer) to historic accounts. What's your lyric-writing process like? How does instrumentation complement narrative?

Writing has always felt like channeling to me. When I respond emotionally to a character, whether a fictional person or historic figure, even an environment, lyrics flow forth rapidly. With this channeling there's always an accompanying rhythm, something that guides the words to fit a pattern. It's not automatic writing per se, but is closer to that than to a labored, cerebral act.

Not to say it’s thoughtless by any means, but that it feels charged by the emotion in a way that demands momentum. Finding words in context of a story I’m trying to tell feels like tapping into a wellspring, something ever-present but operating in the background when I’m not writing.

Instrumentation, along with song style, production, visual art—all aspects of the way we release music—is deeply entwined with narrative for us. For example, between the two albums you mention, the sound and overall vibe is very different, matching their disparate topics. Both of us ‘see’ music, and also experience it as taste, smell, sense memory or most often, empathetic sense memory, since most subjects we cover aren’t things we physically experience.

The idea behind a song always manifests in the way we’re moved to play; from note choice to tempo, degree of aggression or lack of it; again every choice made in the process of writing and recording as well as how an album will be packaged. For us, it’s imperative to do justice to events and people that we write about, and the duty with that is to evoke them in the fullest possible way.

District of Dystopia cuts right to the bone of American politics, foreign policy, and war. What do you think are the biggest issues we're facing during this election season?

Now perhaps more than ever, we notice the Machiavellian tactics used to divide the masses and keep them disempowered. Whether we see this more clearly because we have unprecedented access, or because it's been ramped up of late, I can't say.

But what seems clear is that our two-party system represents us rather poorly, and that political currency is too often spent to ensure we the people remain at odds with one another rather than to protect us and help us thrive. Certain ideas that, to me, appear paramount in the dream-America we grow up being taught to love seem lost in the noise of people screaming for their right to deny others’ rights.

More quietly, beneath the noise and beneath our identity of America as a good thing, runs the machinery that forces a person with multiple sclerosis to need $75,000 worth of meds every month while we’re scoffed at for seeking a $15 minimum wage and are told that poverty only happens because we’re lazy. Politicians in cahoots with corporations craft barriers to voting, and loopholes to make leaders and legislation we’ve voted for impotent, while we’re told our vote can secure our future.

What’s at stake with this election is what’s always at stake—but what never seems to be won—justice, safety, mercy, reason. And nah, I’m not holding my breath.

What were the challenges and benefits of recording District of Dystopia in the RV?

We planned to work within the limitations of that production style, so achieving what we wanted was pretty straightforward. The main challenge was probably just doing the mastering.

We’ve always been intimately involved with the mastering process as producers, but actually engineering that ourselves was something new. Overall, engineering everything DIY was an awesome experience.

One of the great benefits was being able to work on our own time.  Another was that we didn’t have to explain what we wanted things to sound like to another person. We’re always more comfortable doing things ourselves than delegating.

The White Wall of Death is [in]famous—how did that setup develop? There’s something intrinsically powerful about the visual and the act of engulfing an audience in noise.

When I started to play live shows, I immediately wanted the sound of my guitar to envelop me. I also wanted the guitar to have weight and depth beyond a typical guitar sound—to carry all the frequencies of a couple guitars and a bass or two.

The more amps and cabs I used, the more I was able to create that sound I imagined in my head. Then when Edgar and I met and started playing together as a two-piece, he had the same desire as me to be surrounded by guitar. So every time we could, we added to our setup.

By the late 90’s, the Wall had gotten really big, but still had stock grilles on the cabinets. We saw a lot of bands starting to take this idea, and occasionally one would use photos of our gear on their own marketing stuff as if it was theirs. Meanwhile, we’d get skeptics coming up to say, ‘Yeah, so how many of those actually loaded with speakers?’ despite our shows being so loud.

And this whole boutique amp thing, the idea that putting a certain brand of gear onstage somehow makes a band legit, was infiltrating underground metal. We were tired of all that, so we pulled the grilles off and painted everything white.

We created a visual trademark for the stage beyond brand-worship and beyond just our bodies—which for a lot of bands wouldn’t be important—but for us, having put so much work and thought into our setup, is one of the best decisions we’ve made.

We made this setup because its sound is the most ultimate we can imagine, because it helps us be lost in the music, because along with the lighting we design, it puts us fully into the songs—not just mentally, but physically, like a womb that lets us birth all the rage and sorrow that moves our subjects but also releases us fresh and renewed, every single damn night.

The White Wall requires us to spend about 10 hours of setup and teardown every time, but the feeling it gives us is worth every minute and every bruise.  To me, it’s like escaping time and gravity; like becoming part of angels in the most fearsome sense they’re described.  It’s the greatest joy to do that for ourselves and the greatest honor to share that with an audience.

Seems like we’re seeing more and more bands/musical couples adopting the nomadic lifestyle lately. What kind of advice would y’all offer, having done it for so long now?

I think the key is that both people know how to roll with uncertainty, and 100% love each other’s company.  To live with another person in a stressful, unpredictable situation requires being able to rely on them totally. I wouldn’t advise any couple to live this way if they already have problems getting along in one place.

Even a band that’s a happy couple might not find nomadic life sustainable. It’s something people think sounds romantic and great, and at times is incredibly so, but in the end it’s still life, just with added potential for problems. The stress of travel, added to the stress of performing, added to the stress of manifesting your own destiny, is a lot. Don’t expect to be able to do that indefinitely with anyone who isn’t your favorite person in the entire world, or possibly at all.

Being nomadic is being homeless; it’s the only way to go for some of us, but most people would find it pretty torturous.

You’ve got a documentary coming out; is this is all footage you compiled yourselves? What was that process like?

Yeah, we compiled all the footage.  For a long time we figured it was just to document our lives, not necessarily planning to share it with other people.  We were keeping track of our history together, like any family does. But we’ve both always been into photography, so maybe we’ve collected a little more along the way.

Like many films, I guess, it’s kind of a love letter. Not to ourselves, but to the way we’ve chosen to live, to all the awkwardness and difficulty but also the adventure and glorious beauty we’ve been able to witness. I think it will please people who enjoy seeing other people do weird, difficult things—and maybe be a little weird and difficult themselves—while also giving a travel documentary experience.