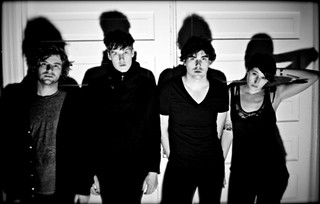 Twin Tigers, from Athens, return to the Jinx April 13

The Spinners are talking specifically about "Racecar," a track from Twin Tigers' brand-new sophomore full-length Death Wish. The song, like the band's explosive live show, is powerful, loud and mysterious and throbs with reverb-laden post-punk energy that seems to come from all directions at once.

Twin Tigers, with tendrils snugly wrapped about old Sonic Youth and Jesus and Mary Chain records, is back for another go-round at the Jinx April 13.

Check out the band's spooky, violent black and white video for "Racecar" here:

A graduate of the Berklee College of Music, Hauser has a clean, neo-folk sound that brings in elements of bluegrass when it's necessary; like fellow Kentuckian Sollee, he has a singing voice that transcends genres (and, if you like, space and time) and radiates a sort of free and soulful humanistic warmth.

In short, give him a shot.

• Britt Scott is in town this week, which means there's a Lovely Locks show, April 13 at the Sapphire Grill. Our favorite redhead is also crooning and swooning at the House of Mata Hari on the 12th.

• We haven't seen good old Dodd Ferrelle in a while — the Savannah native and one-time local stage mainstay is back with his country/rock band for a show at Mojo's Juke Joint April 13, behind a new full-length called Suckerpunch Town.

• The great folksinger (and Star Trek: The Next Generation actor) Ronny Cox returns for two shows next week: April 25 at the Landings Club, and April 26 at Randy Wood's place in Bloomingdale.

• It must be springtime, because Blues on Broughton is just around the corner. Brett Barnard and the Hitman, and Chicago's Bob Margolin, will be set up to wail in the evening of April 26 between Drayton and Bull (on Broughton Street, duh).

• Cusses' cross-country tour has been going very well; Savannah's three-headed monster will return home in early May. There'll be a Cusses show May 23 at Dollhouse, introducing a Kickstarter program designed to help fund a band trip to the U.K.

• Basik Lee, Zach As the Monster and Brian Basemore return to the usually live-music-free Hang Fire for an acoustic go-round Wednesday, April 17.