Tybee one step closer to being banned from banning plastic bags 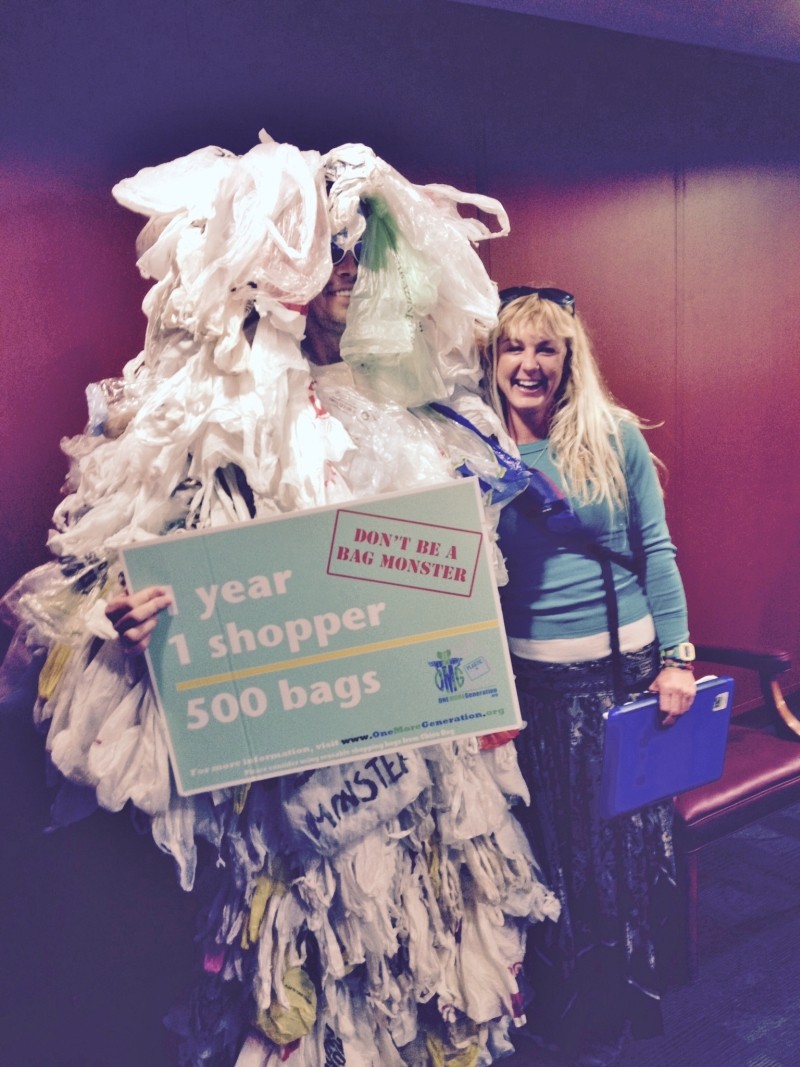 Ashley Workman of Tybee Island Resource Committee poses at the state capitol with the Plastic Bag Monster, aka Jim Ries of One More Generation.

OUTRAGE rippled through the environmental community this week as a bill that prohibits cities and towns from banning plastic bags makes its way through the Georgia Assembly.

Members of several environmental organizations, including the Sierra Club and One More Generation, have professed their opposition to SB 139, which dictates that any regulation, restriction or prohibition regarding “auxiliary containers” must be done by general law.

Next the bill will be heard by the Rules committee and be voted upon by the full House as soon as this Friday.

Both bills override the efforts of Tybee Island, Athens and other Georgia municipalities to pass legislation aimed at reducing plastic bag pollution in their individual communities.

“This is beyond the litter problem. This about local rights,” rails Ashley Workman, who has led the movement on Tybee Island to adopt a bag ban ordinance and drove to the capitol to voice her concerns.

“They’re basically blocking the entire state of Georgia from taking environmental precautions against the danger of plastic bags.”

A proposal that would ban the distribution of single use plastic bags at the point of sale on Tybee Island has been circulating since October. Many of the island’s 3000 residents have shown support for the ban as a way to protect Tybee’s economic interests that are based on its natural resources and marine wildlife.

Workman and others profess suspicion at the timing of SB 139. The bill was introduced by Sen. Tyler Harper (R-Ocilla) to the Senate Agriculture and Consumer Affairs committee on Feb. 20, days after the Tybee City Council had discussed putting the bag ban ordinance on the agenda for a vote in the second week of March.

SB 139 passed the full Senate 32-19 on Thursday, Feb. 26 and has moved to the House for review. Senator Ben Watson (R-Savannah) joined Senator Lester Jackson (D-Savannah) in voting against the bill, calling the outcome “disappointing.”

“It’s telling how fast this was pushed through,” says Stephanie Stuckey Benfield, lead attorney and executive director of GreenLaw, a firm that specializes in assisting Georgia’s environmental community.

A former state representative, Benfield is familiar with the lobbying practices of the American Progressive Bag Alliance, a national plastics industry group that shells out legal fees to fight bans at the local level.

The group has also courted state legislators to enact laws that forbid such bans in Missouri, Texas and Florida. More recently, the lobby spent a reported $3 million to stall the statewide California bag ban passed by voters in 2014, delaying its implementation until November 2016.

The plastic bag industry has a significant presence in Georgia. According to a 2007 Georgia Power report, more than 55 companies produce plastic packaging, representing 16.1 of the total plastics industry in the state. The largest, Pactiv, is based in Covington and employs over 2100 workers.

Senator Harper invoked Georgia’s reputation as a “business friendly” state when he introduced SB 139, explaining that it would prevent “regulatory mayhem” for grocery chains and retailers with multiple locations.

Workman and other supporters of the Tybee Island ordinance maintain that their elected officials have the right to enact legislation that affects their community.

As SB 139 and HB 444 heads towards Gov. Deal’s desk, GreenLaw’s Benfield has enlisted support from a slew of state Riverkeepers and reached out to high-profile activists like Laura Turner Seydel, chair of the Captain Planet Foundation and daughter of media mogul Ted Turner.

The fight against the state prohibition on city-level plastic bag regulation has also found a strange bedfellow in the Tea Party, many of whose members oppose legislation that usurps local control.

“This serves special interests at the expense of local control,” implored a Tea Party representative during Monday’s committee hearing.

Currently, no other Georgia city besides Tybee Island has officially introduced a plastic bag ban.

“It’s not like Georgia is going to see an onslaught of these local ordinances,” reminds Benfield.

“Our strongest argument is home rule.”