Historic venue opens its doors after 15 years of fundraising

IT'S taken a decade and a half, a couple of million dollars and whole lot of sweat equity, but the Tybee Post Theater is finally ready for the spotlight.

The curtains are in place and the art deco sconces installed, but painters and carpenters were still scuttling around the lobby of the historic venue this week, taking care of some finishing touches.

But the certificate of occupancy is on the way, and the historic theater will host two grand opening events this weekend, Sept 26-27: A free champagne gathering on Saturday evening, and on Sunday night, the return of an old island mainstay, Tybee’s Got Talent.

“The closer you get to the end, the more things there are to do!” exclaims executive director Melissa Turner. “We’re really excited that people are finally going to be able to come in, sit, and see the stage.”

That there’s anything left to see at all is a feat unto itself. Built in 1930 as a movie house for the soldiers stationed at Fort Screven, the classic Greek Revival edifice passed through both civilian and city hands after WWII and closed in the face of off-season slumps. The building sat derelict for decades, left to nesting pigeons and trespassing skateboarders.

It wasn’t until a developer applied for a demolition permit in 2000 that a group of locals geared up to save it, but the Friends of the Tybee Theater couldn’t have known that it would take 15 years before anyone would eat popcorn inside again.

“To think this almost went under the wrecking ball is extraordinary,” says Keith Gay, vice president of the Friends of the Tybee Post Theater.

“For a long time, it looked like nothing was happening. Now it’s real.” 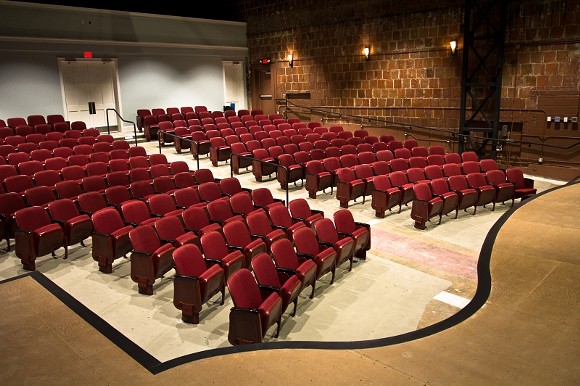 After years of fundraising, construction began in earnest last year with a new roof, and restoration work has been buzzing since. Longtime board members Charlene Grissom and Daniel Turberville helped oversee the project and staved off those who thought the original fluted terra cotta blocks ought to be painted over.

Rows of plush burgundy chairs, bearing a distinct art deco harp design and manufactured by the American Seating Company in the 1930s, were salvaged from the Trustees Theater remodel in 2014 and purchased through a grant from the Savannah Community Foundation’s Alan Gaynor Fund.

While a professional sound system, theatrical lighting and an era-appropriate proscenium are still in blueprint form, the roof overhead and a working HVAC system represent a tremendous bulk of the work.

“When you consider that this was a shell when the effort started, we’ve come a long, long way,” says Turner. “I mean, there was a tree growing in here.”

Much of that effort has been behind the scenes. Since 2001, the non-profit has slowly raised funds with the annual Tybee Wine Festival and Polar Plunge as well as selling engraved bricks and stars for a “walk of fame.” The new Craft Brew Battle at the Beach last spring also added to the coffers.

The City of Tybee chipped in $350K of SPLOST funding for the roof, and Georgia Council for the Arts contributed towards the reconstruction of the historic box office.

The Friends took out a $750K mortgage to cover the rest of the $1.8 million project, banking on the hope that the City of Tybee Island would eventually want to acquire a state-of-the-art cultural arts center that can provide theater, film and other entertainment for locals and visitors alike.

“I do think we should take on the note,” affirms Tybee Island council member Barry Brown. “We can finish it up with more SPLOST funds, just like we did the public safety building. The city owned this theater once and it ought to put back in the city programming.”

Brown, who is up for re-election in November, is including the procurement of the Tybee Post Theater in the bullet points of his campaign, along with the relocation of the Tybee Island Marine Science Center and shoring up the island’s storm water and sewage infrastructure.

The project is on the home stretch, and FOTPT president Jim Kluttz acknowledges that he and the rest of the board just happen to be holding the baton as the Tybee Post Theater crosses the finish line.

“There have been hundreds of people who have kept this project alive, day in, day out, for all these years,” says Klutz, running his hand along the curved wood of the stage.

“We’re all thankful so many have felt that it’s something worthy for the community to enjoy and benefit from for years to come.”