If you’re like me, when people use words like “microbial” and “particulates” your response is usually, “Wait. What?”

Your brain may go into a dormant stage until they begin using words you understand again. Unfortunately this is often how I feel when dealing with the subject of science.

Yet, when I visited the University of Georgia Skidaway Institute of Oceanography to watch a demonstration of water sampling that will be done for the upcoming Ocean Sampling Day, I was reminded of the importance of knowledge gained from their research. 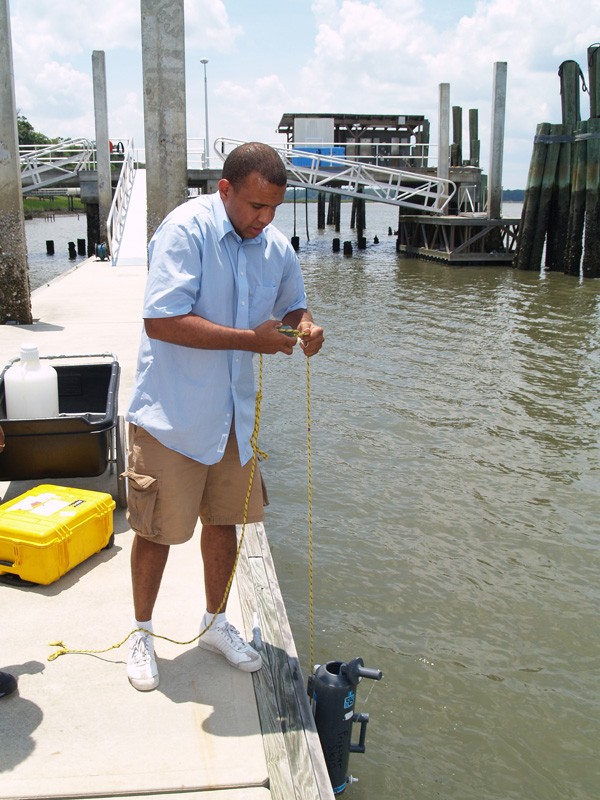 Ocean Sampling Day (OSD) is a worldwide marine research project coordinated by Jacobs University in Bremen, Germany and the University of Oxford in the UK. Although this will be the Skidaway Institute’s first year participating in OSD, Mike Sullivan, External Affairs Manager, says this project fits right into what the Institute has been doing for years.

“We have had an ongoing water sampling program here since 1986,” Sullivan says. “Now in this international effort everybody around the world is doing it on the same day.”

Over 160 marine research locations, including locations in Iceland, Antarctica, and South Africa, have committed to this weekend’s water samplings, all of which happen Saturday, June 21.

The local samplings will be taken from two different locations, from Skidaway River and a second from Gray’s Reef offshore.

In addition, says Frischer, “one of the strategies in our ongoing research has been to explore a gradient of sites from an urbanized area – the Vernon River -- to the offshore oceanic Gray’s reef site to learn about the effect of humans on coastal ecosystems.”

“We do this type of testing much in the same way that you would go to visit the doctor for a check-up, not necessarily because something’s wrong but you always want to have a baseline of what happens seasonally,” explains LaGina Frazier, “That way if we do discover something that is abnormal we can go and check the data set to see if it has happened before and if it hasn’t, we’d have a reason to investigate it further.”

Water filters, before and after they have been used to filter particulates and microbes from a water sample.

Supervising Saturday’s water samplings are three members of the science team that will be doing the hands-on work: Kevin McKenzie, Tina Walters, and LaGina Frazier.

As they all demonstrated for me, they will use what’s called a Niskin bottle to collect water at the depth of one meter.

Once the water is collected and a number of factors like temperature, salinity, and clarity are measured, the water will be taken back to the lab to be filtered. It will then be processed and sent to a lab in Germany for a worldwide collection of genetic information.

With simultaneous world-wide participation, over the course of time these water samplings that are taken will contribute to what will become a mass database accessible to those who participate in the project.

Walters explains, “It’s all these labs getting together, following the same exact protocol to collect samples to look at the microbial diversity in that sample. That data will be uploaded onto some web pages for everybody to share and use as a comparison.”

McKenzie explains the importance of on-going research saying, “Those issues are highlighted through this constant monitoring of defining what the system is, not just within days, weeks, or months, but over a long term you see how the system has changed.” From a global perspective, the project will advance our understanding of the diversity and role of microbes in aquatic environments.

“Microbes -- viruses, bacteria, algae, fungi, microzooplankton -- account for the majority of biomass and genetic diversity of life on our planet and it is well established that they play critical and determinative parts in every aspect of the functioning of all living systems,” says Frischer.

“Because microbes play such a central role in ecosystem function, a deeper understanding of them in aquatic systems will advance our understanding of every aspect of these systems. It is hard to predict direct benefits but the information we gain will certainly be relevant to many issues that are of concern.”